Beware the incursion (from within) 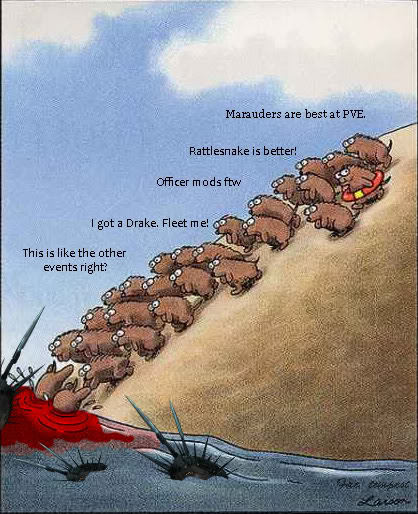 There are some EVE players out there just glorying in their ability to get incursion fleets killed in new and interesting ways.  ;-)

This blog entry is for the benefit of newer EVE players getting their first taste of how a truly corrupt fleet commander or fleet member can get them killed.  If you have some experience with EVE, all of this will be old hat.  New Eden is a harsh, forbidding place and there are players that go out of their way to make it even more harsh and forbidding.

Incursion seems tailor-made to help them.

If you're already familiar with the means for a griefer to use CONCORD, GCC, or fleet mechanics to get a fleet member killed, you can skip the rest of this post.  For newer EVE players, some things to watch for are below.

The methods of getting people killed below apply to high-sec, of course, but to a lesser extent to low-sec as well.  Some of the ways that this is happening:

1. In high-sec, someone joins an incursion fleet in a RR BS(1).  When the Sansha attack him, he calls for reps in the normal fashion.  When he has a large number of people repping him, he attacks a neutral member of the fleet.  This causes CONCORD to destroy him.  And since he's being repaired, CONCORD will also destroy anyone who is repairing him.

2. When the above happens, his accomplices in the fleet will quickly warp off.  The remaining fleet is often insufficient to deal with the Sanshas and is destroyed.

3. All PvE in EVE is based on spawns and triggers.  When a wave of ships appears, one of them will trigger the next wave.  If your fleet is not ready for the next wave, a large number of ships can be lost before recovering the situation.  Corrupt members of your fleet can deliberately try to pre-trigger too many waves for the fleet to handle before warping off.

4. A competent-sounding but corrupt FC who knows the triggers can order the fleet to shoot those triggers prematurely, resulting in an outcome similar to #3.

5. A corrupt member of the fleet in low-sec can apply tactic #1 just before the incursion site is complete and then apologize profusely for the "mistake."  The fleet then warps back to high-sec to repair and reload.  Players unfamiliar with EVE's GCC(2) mechanic jump into high-sec, where they find themselves under attack by players who are familiar with the mechanic, including cronies of the "mistaken" fleet member.

7. A more obvious approach: simply warp half the fleet away from a large incursion wave, leaving the remaining half to die under its guns.

I'm sure there are more, but these are the more common, obvious things to watch for...

(1) RR BS: Remote rep battleship.  A battleship fitted with six or seven medium-range guns and associated ammo.  The final high slot or slots are fitted with either a shield transfer array or (more commonly) a remote armor repairer.  When one battleship in the fleet is damaged, it calls for reps from the remaining RR BSs in the fleet not being attacked.

(2) GCC: Global Criminal Countdown.  When you shoot a neutral in low-sec (or repair another fleet member who did), you incur a 15-minute countdown where you are considered a pirate.  Pirates are fair game for anyone to shoot, including the gate guns at stations and stargates.  If you have a GCC, it will be indicated by a red timer in the upper left corner of your screen. Until that timer expires, it is suicide to enter high-sec, and very dangerous to approach low-sec gates and stations.
Posted by Jester at 3:50 PM