We want to ensure everyone has the portrait of their choice. So now that we have made the UI clearer we will give all characters who have already completed character customization a chance to recustomize. This will be a one-time recustomization to be used during the grace period.

Since every toon gets a free do-over on customization, I went ahead and did new toons for my three mains.  I'll look at them for a few weeks and decide if I want a re-do after that. 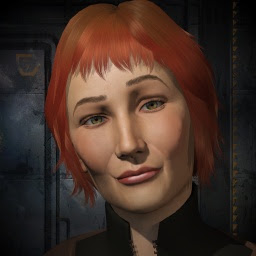 I know I want to redo my main alt, though.  She's only the second toon I did with the new tool.  Despite virtually everyone else's inability to find a way to get a good Gallente face-stretch, I managed to stumble into it somehow.

In short, she looks like she should be marrying Prince Charles.

I got the facial expression that I wanted, though, including the Spockian eyebrow.  But virtually everything else is wrong.  Most of the female hairstyles... oy.

So now it remains to be seen how much the recustomization will allow.  Just the final panel with lighting, pose, and expression?  Or will redoing hair-style and facial structure be allowed as well?
Posted by Jester at 10:01 AM