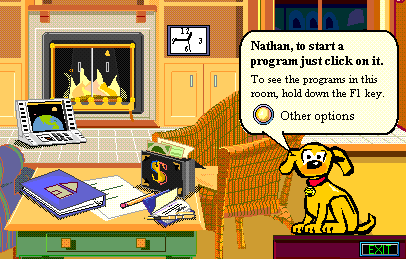 So, there's a new devblog out regarding the first iteration of Incarna.  It's quite long, but Herbicide on SHC has summed it up quite admirably:
We know from reading the summit minutes from June and December that number two was a point of contention between CCP and the CSM.  CCP wanted you to jump directly into the Captain's Quarters, with no view of your ship.  What we've got in number two is a compromise.  You'll presumably be able to select the Captain's Quarters (or undocking) as an option once you're standing on the "balcony" looking up at your starship.

So, come summer, ship spinning will be a thing of the past.  Instead, we'll have toon spinning.

Once you're in your Captain's Quarters (which will apparently be made of modular pieces, but which you might or might not be able to move around), the interface will... well... let's let the devblog speak for itself on this one:


Captain’s Quarters will offer interactions in the 3D space like slouching on your sofa and clicking an interface on the wall to bring up the planetary interaction (PI) interface, customizing your appearance through a vanity mirror and adjusting your fittings through a holo-model of your ship.

3D buttons aren’t an impressive technological feat, yet the interactions in the Captain’s Quarters allow us overcome some old, persistent problems newbies currently have with the complexity of the EVE UI and goal setting. For example, by placing a Corp Recruitment console on the ammo crate you rest your feet on, we can explicitly tell a new player how important it is to find a good player corporation in EVE.

The team is driving toward giving us a demo of this in time for Fanfest in a couple of months, so I'll be very interested,
(a) to see what this looks like; and,
(b) what your average capsuleer on the street thinks of it.

I'm a little worried, though, because EVE players sometimes pride ourselves on how hard EVE is, and wear the pain of conquering its learning curve like a badge of honor.  The relevant Scrapheap thread is growing at 15 posts an hour as I write this.  Emotions are running high...
Posted by Jester at 4:56 PM