If you want to make ISKies on the market in EVE Online, you have to watch basic commodities, particularly those in your production chain.  Two of the items I build and/or invent with my production alt are Trimark Armor Pumps, both the Tech 1 and Tech 2 versions.  As you might suspect, there isn't a large market for the latter, but the former keep me pretty busy.  Rigs are made from salvage.  T1 armor rigs are primarily made from a salvage component called armor plates. 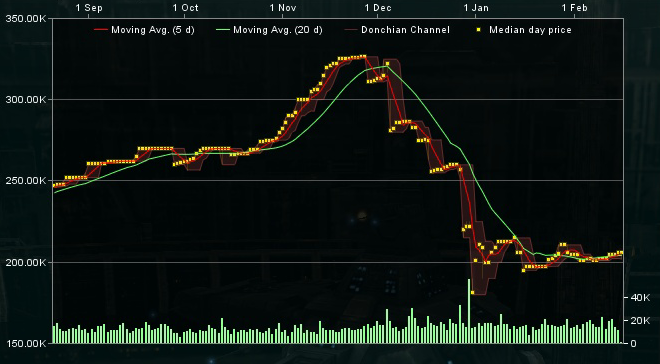 Here's the recent price curve for armor plates for the last six months.  As you can see, the price was pretty steadily going upward until the first week of December 2010.  Armor plates are beloved by salvagers for their relative rarity.  They're only dropped by a few types of rats, are dropped in decent numbers only by battleship rats, and their drop percentage is pretty low.  So, when a salvager can bring a good load of armor plates to market, they know they're going to have a good day, ISK-wise.

Even moreso, because the price of armor plates had been going up all through 2010.  It started the year at around 200k ISK per unit, had risen to 250k per unit by July, and was above 300k per unit by November.  This was reflected in a lot of salvage component prices, which were also edging upwards all last year.  Throughout 2010, it was becoming increasingly clear to many EVE players that looting and salvaging missions or 0.0 ratting sites was no longer worth it from an ISK/hour perspective.  They stopped salvaging.  Therefore, less salvage was reaching market but demand for rigs remained steady.  Therefore, salvage prices were going up.  Basic economics.

Then the Noctis was released.

For the moment, the Noctis has made salvaging fun again.  There's a certain novelty in having a 68 kilometer range tractor beam.  The longer range tractor beams and the faster cycle times on tractors and salvagers means that salvaging is also faster, with less motoring around needed to gather all the salvage and loot.  That increased ISK/hour from salvaging and looting made the practice worth the time spent again.  More people out salvaging also meant more salvage was reaching market, resulting in the free-fall in armor plate prices since the release of the Noctis.  The price for armor plates is back down to 200k per unit.

But look at the price curve more closely, and you'll notice the descent of the price was marked by large drops separated by about a week.  The green bars at the bottom reveal that those price drops were associated with large volume sells of armor plates, spiking around 30k-35k units per day around December 5th, 12th, and 16th.  Then, around December 26th, the bottom dropped out.  Two large masses of armor plates of more than 85,000 total units were dumped onto the market, causing the price to fall 50k ISK per unit in four days.  More than 50,000 of those units were put on the market in a single day, around December 29th.

On December 1st, I personally had a large stock of armor plates that I had bought steadily over the course of 2010.  When I noticed the first dip on the 5th and realizing that thousands of Noctises was going to mean more salvage on the market, I started slowly unloading my stock of them.  I obviously wasn't the only one.  ;-)  Now that the price has stabilized again, I've started slowly rebuilding my stock.  The key word is "slowly."

Real life pilots have an expression: "don't chase the needle."  What this means is that if you're flying at 5000 feet and want to increase your altitude to 7500 feet, do it gradually and steadily.  As you approach your target altitude, reduce your rate of climb.  Otherwise, you'll shoot through 7500 feet, find yourself at 7700 feet, descend again, find yourself at 7300 feet, increase altitude again, et cetera.  Pilots consider chasing the needle to be amateurish.  So too is dumping and running when the commodity market starts running against you.  Had the pilot with 50,000 armor plates put his stock into the market gradually, over the 20 days between December 5th and December 26th, he could have sold those 50,000 units for an average price of 250k per unit.  There was plenty of market volume to accomodate those armor plates, introduced gradually at 250k per unit over a period of time.  Introduced in a single block as a mass, he crashed the market and he likely averaged 200k per unit.

In other words, that pilot lost 2.5 billion ISK chasing the needle.

Will armor plates remain at 200k?  Not a chance.  Salvaging isn't really any more fun than it was before; the extra salvage provided by the Noctis is likely temporary.  As players that got out of salvaging before realize how much they really do hate it, a number of them will again get out of it.  In a few months, we'll have a few more regular salvagers, but for the most part, the people who were salvaging in October 2010 will be the ones salvaging in April 2011.  They'll just be using a better ship to do it.  Prices of armor plates are already edging upward and passed 210k average over the weekend.  Part of this is people garaging their newly bought Noctises.  The rest is people like me rebuilding their commodity stocks while prices are low.

Therefore, it's likely that the price of armor plates has bottomed out.  If you want a stock of them, now's probably the right time to buy them.  But again, don't chase the needle!  Buy what you need slowly and gradually.  A great way to cause the price of a commodity to spike is to place a large buy order at a high price.  That causes everyone else who wants that commodity to beat your buy order.  Then someone panics and places an even larger buy order at an even higher price.  And before you know it, you're buying at 250k per unit instead of 210k.

A pilot that does this can easily lose another 2.5 billion ISK chasing the needle in the other direction.  ;-)