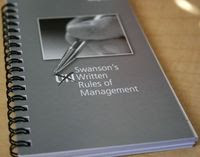 One of my prized possessions as an IT manager and project manager is a slim little booklet called Swanson's Unwritten Rules of Management.  Written by Bill Swanson, the Chairman and CEO of Raytheon, the booklet contains 25 rules for managers, most written in a very down-to-earth, pithy style.


If you are not criticized, you may not be doing much.

The text behind the rule expands on the theme, noting a tendency (particularly in today's society) to avoid saying or doing anything controversial and in so doing, avoiding criticism.  And of course, on the Internet, criticism is instant and quite harsh.  ;-)  Still, the quickest way that most people avoid criticism is by avoiding making decisions or taking actions entirely.  But in doing so, they also avoid noting or solving problems.  As the booklet wryly notes, "problems are not like wine and cheese -- they do not get better with age."

I keep the Unwritten Rules booklet close to me in my office and live by most, if not all, of the rules in it (I struggle with #14 sometimes :-P).  Anyone running for CSM would be well-advised to do the same.  ;-)

But rule #3 has been on my mind quite a lot lately, because the one thing running for CSM definitely does is expose you to criticism.  I've been taking a ton of it lately, and other CSM candidates (Trebor, notably) have been doing the same.  Fortunately, I've developed a quite thick skin over the years, plus the ability to acknowledge that I'm wrong when that happens, and change my stance when I am wrong.  I think I've been called "retarded" more in the last three weeks than in the previous 40+ years of my life combined, heh.  But rule #3 helps me take a certain pride in it because I know even if people disagree with me (some violently), at least I'm out there trying to note or help solve EVE's problems.

I promised myself I'd blog honestly about the CSM run, so I'll admit this.  The hardest thing about a CSM run is all of the criticism combined with all the uncertainty.  There are no polls.  Other than a few endorsements and a few encouraging posts here and on Jita Park, there's few or no indicators of how well you're doing, how your ideas and proposals are being regarded, or how likely it is you'll be elected.  Some days, I'm sure I'll win a CSM seat.  Others, I'm equally sure I'm gonna get my ass kicked.  Many days, the criticism is all you get.

So, it's been nice to notice a growing trend out there since I started writing this blog.  People who would previously just jump to calling me "retarded" have started at least arguing with me intelligently... and a lot of them have even started grudgingly agreeing with me.  I even noticed something on my blog being used as a club to attack someone else on SHC today, which amused me a great deal.

I'll take all the criticism in the world if it means that my poor attempts at helping EVE Online grow are being taken seriously.  :-)