Let's talk about recessions a little bit.  First, fair warning: I am not an economist.  I have a basic college-level Economics training.  My professional life mostly revolves around helping companies deal with the results of a recession, not analyzing one from within.  Still, I've learned a thing or two about this subject over the years, so let's apply it to our favorite past-time: EVE.  Those of you who are economists, please forgive the silly little simplifications in this blog entry unless they lead me to real error, in which case, please correct me in the comments.

Recessions are generally defined as two or more quarters of reduced GDP: Gross Domestic Product.  A quarter is three months.  GDP, put simply, is the total economic output of a system... a country, usually.  But let's simplify.  Say you own a lemonade stand.  Every day, you sell 25 cups of lemonade per day.  Then for three days in a row, it's cloudy.  You only sell 15 cups per day.  On the fourth day, the sun comes back out and you're back up to 25 cups a day.  That's a "V-shaped recession."  Your output slumped, but it was temporary and short, and you're back on track.  Say you try to sell lemonade in the winter.  For that whole period, your output is reduced.  Now that's a "U-shaped recession."  The dip was longer, and it took longer to recover from.

Sometimes, you get an "L-shaped recession."  You sold 25 cups of lemonade per day because there were 40 families living within walking distance of your lemonade stand.  Except this summer, 10 of those families moved away because their houses were foreclosed on.  Now you only have 30 families living within walking distance of you.  You're now only selling 20 cups of lemonade per day, and it looks like that's how things are going to go for the foreseeable future.  That's an "L-shaped recession" and represents a "new normal"... a lower standard of living for you because of permanently reduced output.  A "W-shaped recession", or "double dip" recession, happens when you get two factors at once impacting you, causing output to oscillate up and down.  You sold 25 cups of lemonade per day, but then it was cloudy, causing you to sell 20.  Then the weather cleared and you were back up to 25... but then five families moved away because they don't like cloudy weather, and so you're back down to 22.

When geneticists want to study the effects of something in biology over the course of many generations, they use fruit flies.  Why?  Because fruit flies are small, and easy to care for.  But more importantly, it's also because they have very short life-spans: about a month.  You can track something across 25 generations very quickly using fruit flies, in only a two-year research project.  In the same way, the EVE economy operates very rapidly compared to the real-world economy.  Whole economic trends rise, plateau, and fall in only a few months time.  For example, ship types come into favor, are used hugely across the world of EVE, then fall out of favor and disuse, often in a period of time lasting only three or four months.  Dr EyjoG likes to put out Quarterly Economic Newsletters, because quarterly benchmarks are traditional in the real-world economy.  But  a "quarter" in EVE is really only about two weeks long.  The QENs are really looking at the EVE economy in 18-month slices.  You can see this when they look at mineral prices, and the trend for one month in the quarter is wildly different from the very next month.  That's really a full year going by in EVE economy time.

Real-world recessions generally happen because people lose their jobs and stop spending money.  Recessions tend to be self-reinforcing because as people stop spending money, companies that are hurting for business start letting people go.  These newly-unemployed people then stop spending their money.  This causes even more companies to struggle, and to let people go.  Pretty soon, you're in a vicious circle that can be hard to get out of.  As people stop buying stuff, demand for stuff slackens.  Companies respond by lowering prices, but even at these reduced prices, you see decreased sales volumes.  This reduces GDP and causes the recession to continue.

In today's economy, it's trendy to talk about the "underwear index."  The theory goes like this: even in a full-on recession, people need to keep buying food.  So while food sales will generally be unaffected by a recession, items that aren't necessities will see reduced sales volumes.  Alan Greenspan pointed out that men tend to ignore the condition of their underwear unless it's pretty freakin' bad, and if they don't need new underwear, they don't buy it.  He theorized that as you saw sales volumes in men's underwear going up, you could point to that as a pretty good indicator that things were starting to pick up, even in a recession.  On the reverse end, he further pointed out that when men stop buying underwear and you see a sales dip, even when the economy seems healthy, you know you're at the start of a recession.  It's a fun little theory, and it seems to track well with real life.

But they do need ammo and other charges.  No matter what you're doing in EVE, you're probably spending ammo or charges to do it.  That's our food equivalent.  What's underwear?  I believe rigs are EVE's underwear.  Stay with me for a second.

When a PvPer blows up an enemy's ship, or a ratter kills a rat, all sorts of items drop.  Sometimes, the collector of this loot hoards it, sometimes they fit these items to their own ships, sometimes they sell these mods or melt them down.  But one of the key items that never drops are rigs.  Completed rigs never drop as loot.  Rigs aren't useful for compression, either.  A rig takes up way more space then the salvage components that it's made from.  There's only one thing you can do with a rig: mount it on a ship.  So while mods can be bought and sold for melting, and so can ships, rigs never can.  Every time a rig is sold, that represents a ship that's going to be built and fitted in the near future.

That means that rigs should be a good economic indicator of ship-building in EVE: that's EVE's underwear index.  Therefore, a slump in the sale of rigs should represent a slump in ship-building.  As demand for rigs falls, we should see prices slacken as well.  These might be good indicators of a coming recession in EVE's economy.  So... is that happening?

A week or so ago, I mentioned my theory that we're starting to see down-stream effects from the elimination of havens and sanctums.  That patch hit with Incursion 1.4, on April 6.  Here's the price in Jita over the last 30 days of a Small Projectile Burst Aerator I, a very common PvP rig: 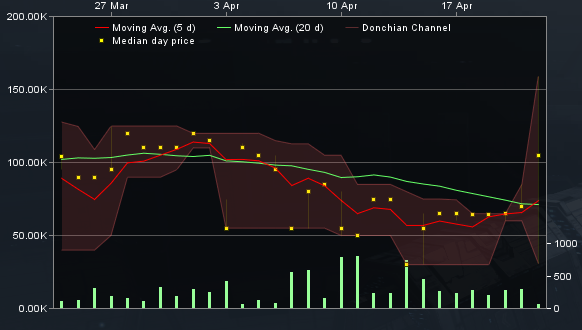 Can't see the curve?  Let's take a look at the same rig in a smaller market over the same date range, like Rens: 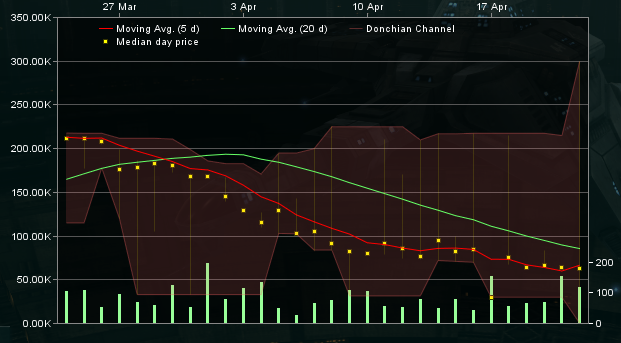 Beautiful curve, don't you think?  A real-world economist would love to get a curve that clear-cut for a research paper.  Check out the dates at the top.  Remember: the full effects of the sanctum nerf were known several days before it hit.  I could post a half-dozen more PvP rig types, but feel free to check for yourself.  The prices of rigs are currently dropping, and demand is off.

The next thing you need to build a ship are mods.  Now, PvPers are pack-rats.  There isn't a PvPer I know that doesn't have a stock of looted mods somewhere: piles and piles of Large Shield Extenders, shield and armor hardeners, armor plates of various sizes, Damage Controls, points and scrams... the list goes on.  The thing you invariably don't loot enough of, though, are guns.  You almost always have to buy at least a few guns to fit out a new PvP ship.  After that, you can usually finish out the fitting with your purchased rigs and your can of looted mods.  So, are the prices of guns dropping?

Here's 425mm Autocannon IIs in Jita, one of the most popular PvP weapons: 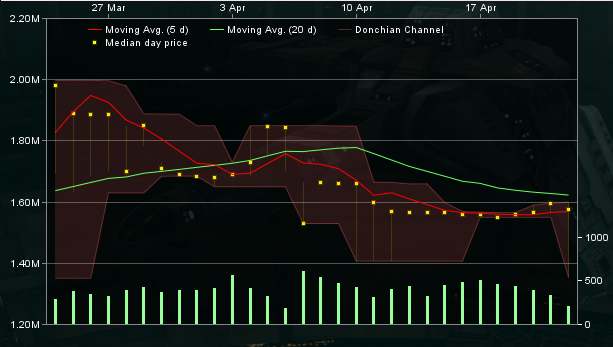 That curve is trailing rigs by about 9 days.  Again, look at the green bars denoting volume, too.  Other guns are starting to show similar curves.  Prices of rigs are off, and demand is starting to slacken.  Prices of guns are just starting to fall, and so is demand for them.  Ammo is still fine, because everyone needs ammo.

So does this mean EVE is headed for a recession?  The data doesn't support that conclusion... yet.  This is only one "EVE quarter" worth of data.  You need at least two quarters worth of reduced GDP to declare a recession.  But these curves definitely bear watching.  A good mod to start keeping an eye on is probably the Invulnerability Field II.  After guns, this is a mod that PvPers run out of pretty quickly, and ratters, wormhole specialists, and incursion-runners need them, too.  If we start to see the demand for and price of Invuls start to fall, then I'll start to worry.
Posted by Jester at 12:22 PM