So after a few days with Perpetuum Online, I've decided that I'm not going to subscribe to it.  As I mentioned in my satirical little piece the other day, it's just too much like EVE.  It's copied EVE so well that it's copied all of EVE's worst flaws -- and even many of the niggling minor ones -- along with EVE's virtues.  There was an opportunity here for Avatar Creations to break with CCP's way of doing things when it made sense to do so, an opportunity that they let pass.

I'll continue playing with it through the end of my trial period, but then that will be that.  I have confirmed to my satisfaction that Perpetuum auto-cannons suck and magnetic weapons are actually quite good.  Very ironic, considering.  ;-)  But playing Perpetuum has crystallized my thinking around a couple of topics that seem to be the second-biggest decision (after genre) that an MMO-maker has to make: how to handle targeting and friendly fire.

At one end of the spectrum is Global Agenda.  You'd be tempted to think that GA has no targeting at all.  As you play, though, you slowly come to realize that it does, but it's just keeping the targeting somewhat invisible to the player.  The targeting reticle knows when you have something in your sights, for instance.  With many weapons, it will turn yellow if it thinks you have a moderate chance of hitting the thing you're aimed at, and it will turn red if it thinks you have a good chance.  Of course, if you trust the targeting reticle alone, you'll probably miss.  Particularly with Recons and Assaults, you either have to lead your target quite a bit from the reticle or adjust your sights for horrible Assault gun accuracy.  One of the Assault guns -- the rocket launcher -- has target-following capabilities, which relies on the player firing when the reticle turns yellow or red.  As long as the player does that, that weapon will not miss.  And many of the Robotics turrets will paint a targeting line from the turret to the enemy under fire.  That's useful for other players to use as a guide for firing at enemies in concealment.

Targeting is a huge strength of Black Prophecy and World of Tanks, both of which looked closely at their genres before making this critical decision.  Black Prophecy will let you target ships in your range, but it's only a guide to aid in tracking, following, and aiming, not a guarantee of hitting that target.  Sure, it gives you an auto-targeting reticle, but that reticle won't do you any damn good if the target is behind hard cover.  And like Global Agenda, if you let the auto-targeting reticle take the place of your brain, you'll miss every time as the target jinks and dodges.  World of Tanks was clearly tempted to go for the GA "no targeting, ever" rule, but then took a small bit of pity on its players and their human inability to differentiate the pixelated tanks from the pixelated landscape.  And so it will give you an outline of the target in your sights if it thinks you have a chance to hit that target.  It's a good compromise.

At far other end of the spectrum is EVE Online and Perpetuum.  Both will let you target and lock anything in range.  And if it's targeted and locked, you'll probably hit it.  In EVE Online, this makes total sense.  You're in space, after all.  There isn't exactly a lot of cover.  There's no reason why you shouldn't be able to target anything you like.  Perpetuum copies this mechanic exactly, to its detriment.  After all, Perpetuum takes place on the ground, in areas with lots of cover, both hard and soft.  It makes no sense that I should be able to target someone when there's a giant structure between me and him, but as long as I'm in range, Perpetuum lets me do it.

In the non-MMO field, like BP and WoT, Homeworld and StarCraft also both take a middle ground: you can attack anything that you can see, but you can't really target anything.  This is the model that Perpetuum should have followed, and didn't.  "If your friends jumped off a cliff, would you?" is the parent's ancient lament against peer pressure.  Perpetuum's answer is clearly "Yes, I would."  By aping EVE Online so closely, they followed EVE into a place that EVE's genre supports, but Perpetuum's does not, to the latter's cost.

So, targeting is a huge weakness of Perpetuum.

Both EVE Online and Perpetuum also offer huge spreadsheet lists of all available targets.  GA, WoT, Homeworld, and StarCraft definitely do not.  Black Prophecy has the best compromise here: you can cycle between available targets using the "T" key, but if you're desperate to find a particular target in range, you can hit the "U" key to bring up the things your sensors can see and target anything on the list before putting the list away.  If Perpetuum insisted on letting you target anything, this is the way Avatar should have done it.  By copying EVE's Overview, they've also copied EVE's cluttered-screen inherent flaw.

Now that you've targeted something, let's talk about shooting it. 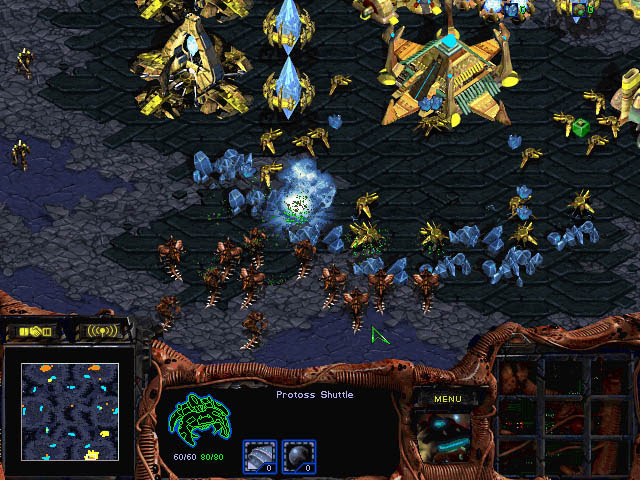 In a game chock full of clever innovations, one of StarCraft's most clever happened when you sent a large number of ground units to attack a relatively stationary target or set of targets.  I'm sure it would have been tempting to just clump all the attacking units into a blob.  This is what happens in Homeworld, for instance.  Instead, StarCraft units spread out.  Sometimes, this was frustrating, because -- other than Carrier drones for some reason -- StarCraft units only attack when stationary, never while moving.  But the "spread out" mechanic hid that and presented the illusion of a dynamic advance where that didn't exist.  It did something else as well: it allowed Blizzard to mask the fact that ground units such as the hydralisks pictured at right were firing solid projectiles right through each other.  It presented the illusion that the units were avoiding friendly fire when really, StarCraft had nothing of the sort.

Homeworld, by contrast, is plagued with blobby blobs of units firing everything from solid projectiles to doomsday weapon beams right through each other.  And of course, EVE Online has the very same flaw.  Even if there are 20 hostile ships between your heavy missile and your target, the missile will fly right through those obstacles to reach its target.  Pandemic Legion has had some success using firewall battleships using smart-bombs to thin out missile spam, but that's the only recourse.  You can't shield a damaged ship from an Armageddon's pulse lasers with your own.  Those lasers will go right through you.  And it doesn't matter if those pulse lasers are friendly or hostile, if you're in 0.0 or high sec.  Unless it's an AoE weapon, there's no such thing as unintended friendly fire in EVE.

World of Tanks takes the opposite approach: if that tank shell hits you, it doesn't care if you're friendly or hostile.  It hits and causes damage.  If you're stupid enough to be in the line of fire between two heavy tanks, even if you're scouting for one of the two, then you're going to get what you deserve.  Bravo.  GA and Black Prophecy take similar approaches, but are mitigated by the fact that both have cooperative game-play mechanics.  As a result, in both, if you try to fire through a friendly, the shot will hit the friendly but will not cause any damage.  It's not the choice I would have made, but given the mechanics of both games, it's a choice that makes sense.  And in both cases, if another hostile gets in the way of your shot at a target, your shot damages that hostile, not your intended target.  It opens up the strategy in both games of shielding your weaker players behind stronger players. 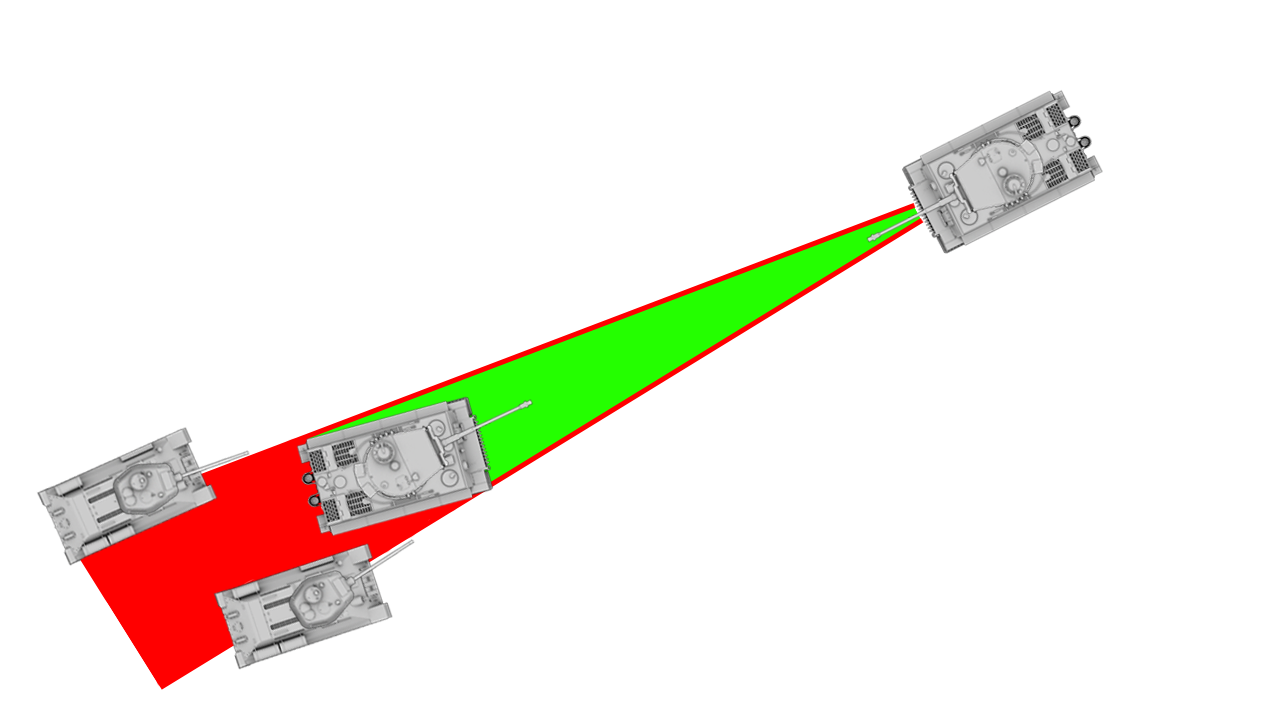 Which leaves Perpetuum.  Which again follows EVE right off a cliff.  This is, if anything, even more silly than following EVE's targeting mechanic.  Auto-cannon shells, gauss gun rounds, and laser blasts can be observed going right through friendly and even enemy robots to hit the intended target.  In World of Tanks, a cooperative element of three friendly tanks can advance in a wedge formation, allowing all three tanks to fire on a target while allowing two weaker tanks to hide behind a stronger tank to avoid counter-fire.  It's a mechanic that should have been included in Perpetuum, particularly given the great size difference between its various robots.  And unless it suddenly becomes available on Beta ground, it's not.

So, this is another huge weakness of Perpetuum.

So, no.  Not subscribing.  Not only does Perpetuum have all of EVE Online's weaknesses, it has other all-new weaknesses that it can call its own on top of the ones it copied from the other game.

It's a real shame, and could have been avoided.
Posted by Jester at 10:12 AM