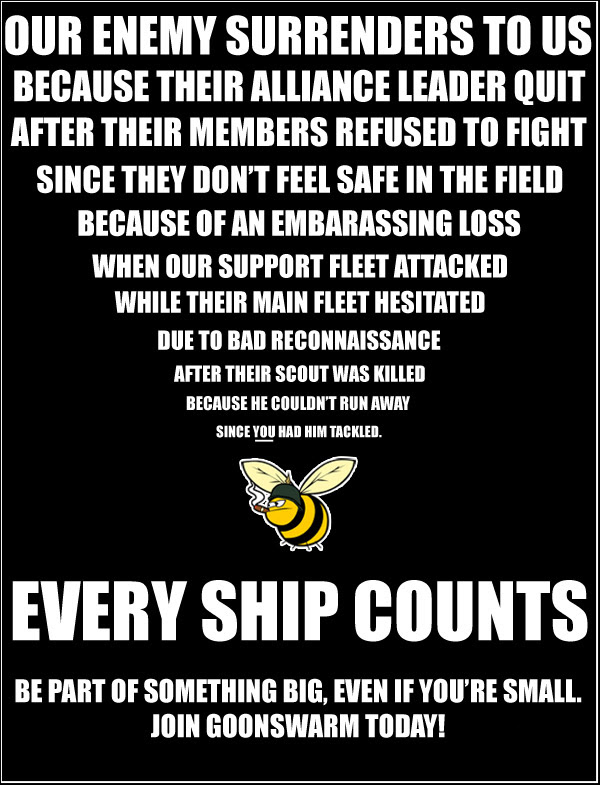 Something that Goonswarm is insanely good at is messaging and propoganda.

Given the events of the past 48 hours, perhaps CCP should hire more former Goonies.  ;-)

One of my favorite Goonswarm propaganda posters is the one at left, which is an EVE Online retelling of the old "for the want of a nail, the kingdom was lost" story.  It's simple, elegant, and beautiful.  Every culture on earth has their "pebble that started the avalanche" analogy, and many cultures have more than one.

The Fearless newsletter is just such a pebble.

For the three or four of you not keeping track, about 48 hours ago as I write this, EVEnews24 posted an article that included an excerpt from what they claimed was a CCP internal newsletter that they had received about a month ago.  The excerpt was titled "Fearless" and subtitled: "Greed is Good, the Gordon Gecko issue."  EN24 spun the excerpt (you can download it here) as an official CCP position paper on micro-transactions on their three MMO properties, EVE, DUST 514, and World of Darkness.  It includes one page each on these three properties, detailing what were purported to be future plans for MT in each of those spaces.  It includes a second page for EVE detailing "pro" and "con" positions for greatly expanding the role of MT in EVE from "vanity items only" to "everything!  why not?"

A thread was created on the EVE-O forums pointing to the article and attributing all the most incendiary quotes to "EVE Lead Game Designer."  In particular, one quote was included that was particularly incendiary:


"Not all virtual purchases will focus on customization, some will simply be new items, ammunition, ships, etc. that can be purchased outright."

Given that the "official" CCP position for some time has been "MT for vanity items only", this -- if confirmed -- would represent a 180 degree shift from that position.  Further, it would seem to present evidence to the effect that CCP had been lying to the CSM and to EVE players on their future MT strategy for nearly a year.  The thread -- and corresponding threads on FHC and Kugu -- turned into rivers of flame insisting that the excerpt was a well-crafted hoax.

Except that it wasn't.  Seleene and other current and former CSM members came out to confirm that the format and title of the excerpt matched the style and length of the CCP internal company newsletter.  CCP soon sheepishly confirmed that the excerpt was the real deal.  The leaker was revealed as Helicity Boson, well-known and -respected EVE player.  He soon released the full issue of the company newsletter.

The thread on the EVE-O forums quickly grew to more than 2500 posts of player rage, and did it in less than 48 hours, making this thread one of the longest in EVE-O forum history.

In my job, I have had the opportunity to read dozens -- if not hundreds -- of internal company newsletters.  I spend a lot of time on the sites of other companies, and I can tell you, these things are not treated as particularly protected information.  You find them strewn around in cafeterias, break rooms, conference rooms, and in racks on secretary's desks and in hallways.  There are two types of internal company newsletters: official ones, that have the sanction of the company's senior management and are created by the management's staff, and unofficial ones, that are tolerated but otherwise ignored by senior management and created by the company's internal communication department to communicate and comment on company policy.

Know how you can tell the difference between these two types of newsletters?
Make no mistake: Fearless is a pebble.  It might start an avalanche, but it's still a pebble.  Here's the editor's LinkedIn profile.  She's been working at CCP for about three years.  Check out what isn't on her resume for her current job: leadership of a team.  She's done it in the past, so wouldn't have hesitated to list that responsibility again.  Which means she's not only editor of this newsletter, but chief writer and chief bottle-washer as well.  A company newsletter that jokes when profiling a half-dozen employees that these are "CCPers with nearly spotless prison records" hasn't exactly been run by the company executives or the legal department, know what I'm saying?  ;-)

Which means that this newsletter is articles begged from an editor, who went to people in the company, who in turn wrote about what they hope is happening and what they think is happening, not what is really happening or is planned to happen.

Again, I've seen dozens and dozens of unofficial company newsletters.  This one is only different in that it's a little more speculative and open than most, but I can assure you, having seen as many of these as I have, there isn't a company in the world that would want one of theirs published in the outside world.  Example: I have on my office credenza, right now, a company newsletter from a multi-national, but now bankrupt, trucking company.  The cover story is a serio-comic look at how to reduce driver accidents.  I say "comic" because the article is laced with extremely amusing stories of trucks that got away from their drivers, often with serious injury-producing results.  To call the newsletter "potentially embarrassing" had it ever gone public is understating the case by a great deal.  Needless to say, that newsletter was of the "unofficial" variety.

And Fearless isn't even documenting funny stories about how people were seriously injured by out-of-control big-rigs.  It's just detailing not-strategy for a video game, from a bunch of people who were in little or no position to say what the official strategy is.

So, 86 pages of fallout later, CCP tried putting out an official post on the EVE-O forums asking for calm.  That thread now has more than 5000 posts of player rage, and it did that in less than 24 hours.  It is the longest in EVE-O forum history.  For reference, the :18months: rage thread was fewer than 2000 posts total over about six weeks.

This is in the thread asking for calm, and asking for people to -- you know -- maybe put down their torches and pitchforks for a minute.  ;-)

Every bit of player rage about Incarna, :$99:, monocles, and Scorpions for Aurum is coming out, all at once.  Hundreds of people are unsubscribing EVE over this.  Unfortunately, the writer -- CCP Pann -- made the mistake of saying the following:


As I see it, the chief complaint is regarding the high cost of goods in the Nobel Market.

...which unfortunately kind of proves that CCP really doesn't get where the rage is coming from or why.

And yet, none of what's in the newsletter has actually happened, and none of it is in any sort of official future plan for EVE Online.

Fearless is a pebble.  But it's a pebble made of freakin' anti-matter, tossed down the mountain at exactly the wrong moment for CCP.


By the way, here's some of the fallout from this and responses to it:

As I write this, CCP has promised an official response in an hour or less.  Should be fun reading.

EDIT (24/Jun/2011): The official response is out.  The associated comments thread hit 900 posts of rage in about an hour, and so looks to completely dwarf the thread above as the new EVE-O threadnaught record holder before the weekend's over.  I'll post my own comments on the devblog in the next day or so.  The major unanswered question: will there be non-vanity items in the NeX someday?  "No answer" sounds suspiciously like "yes" in this context...
Posted by Jester at 1:35 PM