Pic of the Week: Reality distortion

One more post about the EVE Online week of rage, then I'm gonna get off the topic of EVE for a while, other than continuing to clear my "fit of the week" file.  I'm supposed to be blogging about other MMOs now.  ;-)

In my wrap-up yesterday, I didn't -- with some justification -- mention the atrocious devblog that CCP Zulu posted on Friday.  I didn't post it because, quite frankly, it wasn't deserving of any respect.  It was condescending and hostile in tone, full of CYA language, self-congratulatory, and generally ill-conceived from start to finish.  In particular, it compared EVE virtual clothing to real-life designer jeans costing $1000, which is not exactly something that your average EVE player owns a pair of.  ;-)  It went a long way toward exacerbating what -- until then -- was a relatively controllable situation.  Mittens characterized it (correctly) as a piece of work that turned a minor player brouhaha into a major marketing crisis.

And it was all avoidable.  Zulu asked the CSM for input on the devblog.  They provided extensive feedback on how this devblog should be changed and softened.  Advice that apparently wasn't taken.

Trebor was asked: how close was the final version to the draft you saw?  He responded:


Very close. We made many suggestions as to the problems we saw with the draft, and the player concerns it needed to address. The only significant change was the removal of an ill-advised analogy.

To which, the obvious response (quickly stated) was: there was an analogy in it that was worse than $1000 designer pants?

Unfortunately, the devblog combined with this revelation turned Zulu and other key figures in CCP into figures of fun.  In particular, T'Amber posted a funny parody video claiming Zulu needed monocles sold so that he personally could buy himself more $1000 pants.  The trend was ironic given that one of the paras in the offending devblog asked players to lay off individual CCP employees.  Yes.  But nothing summed up the feeling about this devblog more than this little pic: 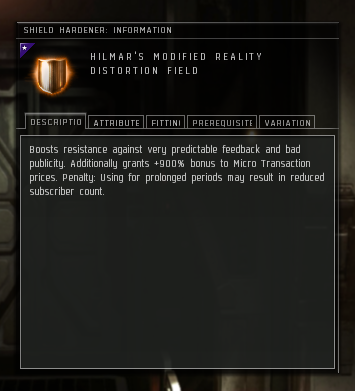 Gotta love the inventiveness of your average EVE player.
Posted by Jester at 9:48 AM