Not all curves are pretty

On Failheap yesterday, Trebor from the CSM asked if someone could put together 7-, 30-, 90-, and 180-day rolling averages of the number of EVE players logged into the game based on data that's available on the EVE Offline website. That website's primary purpose is to act as a check-point so you can see -- if you can't log into the game -- whether that problem is just you or the server itself is down. But as a side effect, it tracks the availability of the EVE API by querying for the number of players logged in at any given time... and then as a second side effect, publishes daily averages and maximums.

Liang Nuren managed to download that data and put it into a CSV spreadsheet. On a whim, I took that spreadsheet, collated the data, and generated a graph of the rolling averages that Trebor asked for. Batolemaeus then took my graph and drew lines to indicate when various EVE expansions were released. Here's the final product (click to embiggen): 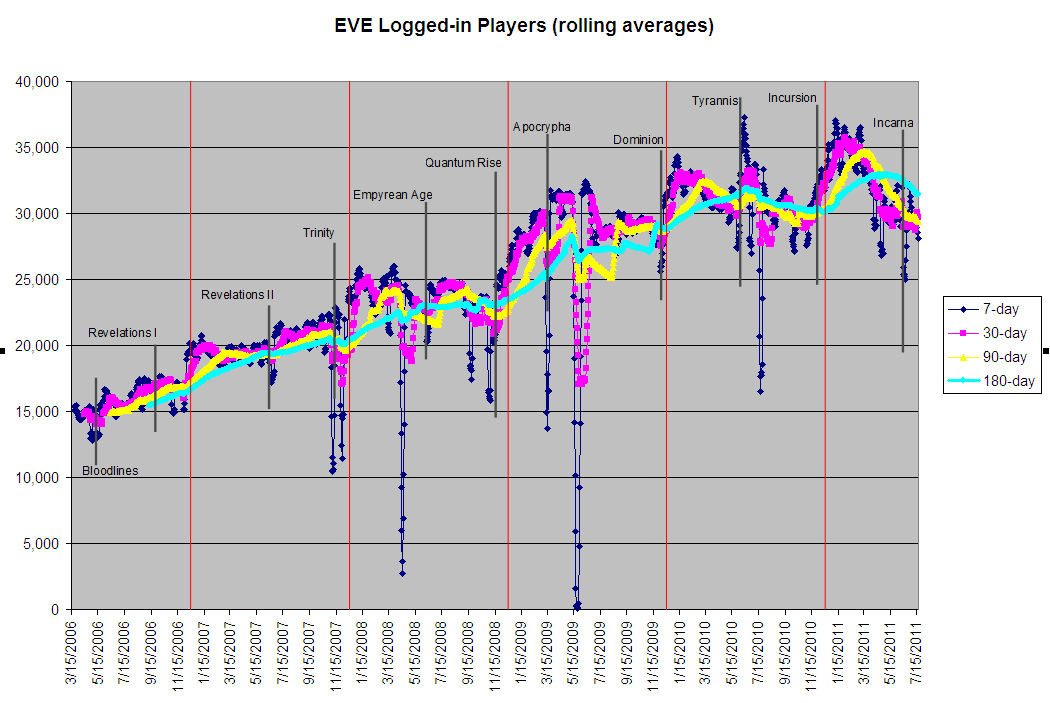 The raw data behind this analysis is available if you want it, too. You can ignore the places where the dark blue (7-day average) briefly bottoms out. Those represent gaps in the data provided by EVE Offline and don't materially affect the longer-term trend lines. And keep in mind, this data just reflects the number of people logged into the game, not the number of active accounts.

In particular, the big dip that takes place during the Apocrypha expansion, around June 24, represents the "Unholy Rage" implementation: CCP permabanned the accounts of about 6000 botters (logged in 23/7) that day.

The more I looked at this chart, the more it bothered me. I finally took some more time and put together a table that looked at the data in a different way. This time, concentrating on the 30-day rolling averages, I decided to look at three numbers: how much did the average number of players change 30 days after each expansion was released? How about 60 days? And finally, how about taking that metric from the day of that expansion to the release of the next expansion, whatever it was? I figured the first number would reflect people trying out the new expansion, and the second number would represent those same people sticking with the expansion, plus telling their friends "hey, look at this, this is pretty cool." The third number would at least partially reflect the overall success of that expansion: had it drawn in new players to the game, who in turn kept playing?

When I looked at the data in that way, I got this:


"Feature" is just a one or two word indicator of what that particular expansion is now best known for. By this metric, Trinity is one of the most successful expansions written for EVE, and it's not hard to see why: Trinity made the game much, much prettier. The +29% growth of average players logged in after its release shows the "hey, this is pretty cool" factor at work. The numbers for Quantum Rise are a bit tougher to justify. Three years later, this expansion is mostly known for being the infamous "nano nerf" expansion that cut the speed of every ship in EVE and every mod or rig that was being used to help players speed tank. However, Quantum Rise also introduced the new scram mechanic (scrams shutting down MWDs) which made PvP in EVE a lot more interesting, so that might have had something to do with the big increase in log-ins this expansion brought.  In addition, CCP did a lot more marketing (including TV advertising on SciFi in the U.S.) during this period, which probably brought in a lot of new players.  There were also a couple of fairly major meta news items affecting EVE at that time: Band of Brothers was disbanded in February 2009, for example.  That probably attracted a few more players still.

Apocrypha can also be regarded as very successful. Despite showing only a +5.7% long-term increase in players, Unholy Rage took place in the same period. Normalized for that, Apocrypha would have actually boasted about a +24% increase in logged-in players.

And by these metrics, Empyrean Age, Tyrannis, and Incursion have been failures. Empyrean Age brought in new players to try faction war, but the overall dip in players by the time Quantum Rise was released showed that very few players stuck with the game after trying it. Tyrannis had the same impact for PI. Incursion had the same impact for Incursions (though the number of players in high-sec Incursions apparently recently took a huge jump). The Incursion +60D number is probably an outlier; Incursion also released a lot of skill points from Learning skills back to the players and for a while there were a ton of people playing with the new ships these SP gave them access to.

Expansions like Revelations I and Dominion are in the middle. Dominion is mostly known for its massive changes to the 0.0 sov system (including system upgrades), but it also included a ton of other new features, such as pirate ship buffs, an auto-cannon buff, a super-carrier buff, and pirate faction mission arcs. Revelations I had pretty much no cool factor at all, but the combination of its incremental upgrades and the fact that players at this time were really getting into capital and super-capital warfare (introduced in RMR/Bloodlines, the previous expansion) likely kept players logging in.

But the overall worrisome indicator on this table? By this metric, EVE has not had a truly successful expansion since Dominion, almost two years ago. Which leads to...

One last thing: this chart seems to prove what a stagnant state EVE is in at the moment: other than the +60D peak after Incursion, the 30 day rolling average number of players logged into EVE has not changed from 30,000 in 27 months.

It will be interesting to see what this kind of metric shows for Incarna. We're only about +35D or so into Incarna at this point, and of course it's a long long way to the next winter expansion. However, the curve so far is not pretty.
Posted by Jester at 10:48 AM