Pic of the Week: CCP Troll 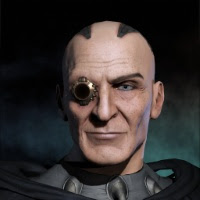 Every current active account-holder in EVE received an EVE mail over the weekend from Darmad Crishan, "Chief Operating Officer" of Noble Appliances.  His picture is at left.  He has all the appearances of an EVE player, even down to an in-game Character Info page and an EVE Gate profile.  The only clue that you're dealing with something not-quite-right is the fact that he's been with his current corp for 33 years.  ;-)

First, let's put aside the fact the Internet has evolved to the point that we're now receiving spam mail in an in-game e-mail client.

Let's also put aside the fact that the guy is wearing a monocle.  We already knew that CCP trolls EVE players better than the best EVE playing troll could ever hope to.

No, let's focus on the really interesting thing.  Anyone else notice the fact that this guy is most likely wearing the most ugly clothes ever designed in the (future) history of man-kind?  ;-)  I judge only by the neck- and shoulder-lines, of course, but they are not promising...

Can't wait to see them in their full glory in the NeX.  It looks like he's got a face-hugger climbing his chest or something.
Posted by Jester at 3:28 PM