We've got a live one

As I mentioned on Twitter Sunday night, I spent most of this past weekend incursioning, including flying in the low-sec mom fleet that I mentioned in my previous post.  But PAX, the Penny Arcade gaming convention, was also happening this weekend, and CCP Dropbear and CCP TonyG were there (among others from CCP) to demonstrate EVE to convention-goers.

One of the occasional incursion features are the Live Events, run by GMs or by EVE developers.  During a live event, a Sansha mothership and support fleet appear in a high- or low-sec system via a series of wormholes to wreak havoc on all comers.  Those that want to participate jump into the affected system to confront the Sansha, only there are a few twists:

As a result, there's a somewhat different crowd that goes in for live events, normally.  You see a lot of veteran players and veteran role-players, having fun with that aspect of the game.  I myself don't have a huge amount of interest in it, but I wish those that do well.

Still, when it was announced that there would be a live event during PAX displayed for PAX attendees on a big screen in the EVE booth, I decided "what the hell" and decided to participate.  Rather than taking one of my expensive Basilisks, I jumped into a cheap PvP Scimi fit, got into one of the response fleets, and headed for Jita, where the response fleet was forming up.

Meanwhile, TonyG was bragging about the event on Twitter (and trying to get EVE players to participate), including posting pictures.  Here's the first one he posted (click to embiggen all pics): 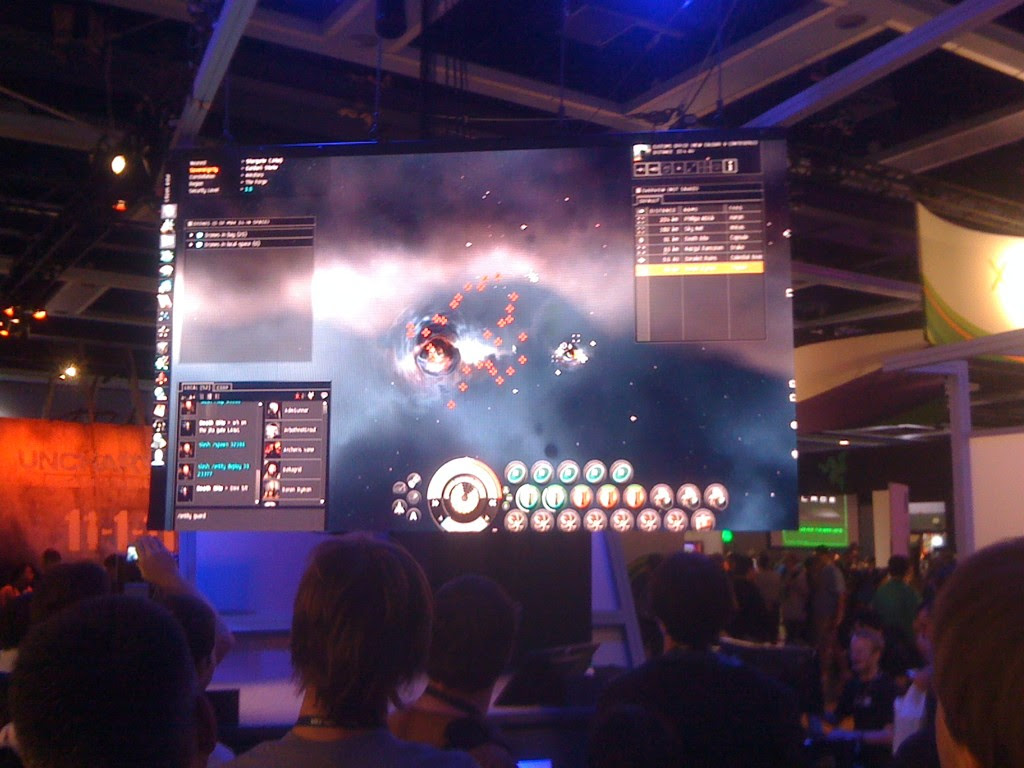 Pretty cool, I thought.  It was fun to see a lot of interested people there.  It made me wish PAX takes place a little closer to where I live.  Ah well.  Anyway, the FC was on our fleet voice comms, going into tactics that would be needed to take out this particular version of the Sansha mothership, including tactics that would have to change if it had smart-bombs or neuts fitted.  "It does," I reported on comms.  "CCP TonyG just tweeted a picture.  It's got five smart-bombs and two reppers fitted," I said, then linked the picture.  "Well, that answers that, then," the FC said, amused.

Before too long, we were in New Caldari with the mom.  Fortunately, it was just off the Jita gate in New Caldari.  I happen to have a couple of observation bookmarks around that gate.  Here's a screen shot from my EVE client.  I had just warped off to one of my safes to avoid a spawn of Sansha battleships that decided my Scimi would make a good target to aggress on. And here's about the same moment from TonyG's perspective, again posted on Twitter: 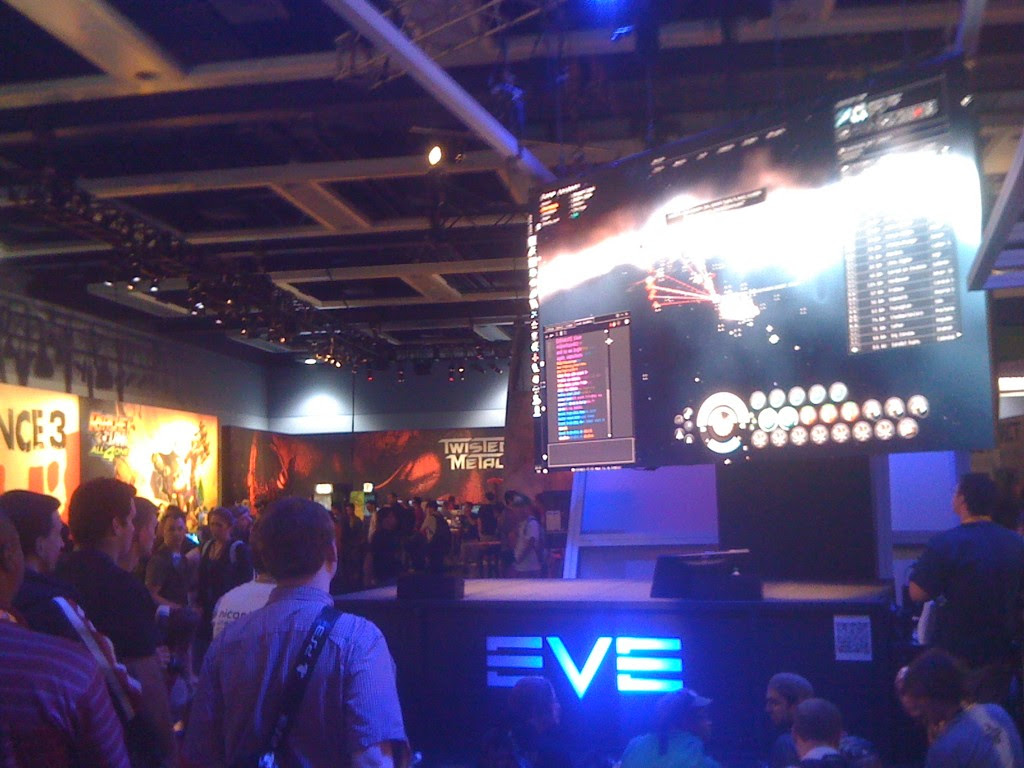 Overall, a pretty easy fight!  There were about 70 in our response fleet, and a few hundred responders overall.  A few people in our fleet would get aggressed, but more often than not, they'd warp off before any of the fleet's logi, including myself, could rep them.  I didn't bother bringing damage drones, both because of the smart-bombs and because I don't consider an LE kill a "real" kill-mail.  And there was almost no role-playing involved this time.  I'm told usually, the role-playing is very extensive.  As this was a demo for the PAX crowd, the lack of this component wasn't particularly surprising.

CCP Dropbear thanked us for participating, then announced on Twitter that the event would be repeated the next day, Sunday.  I passed this along to the official incursion channels.

Dropbear was apparently not happy with the overall strength of his forces OR his ship on Saturday, because he upgraded a bit on Sunday... 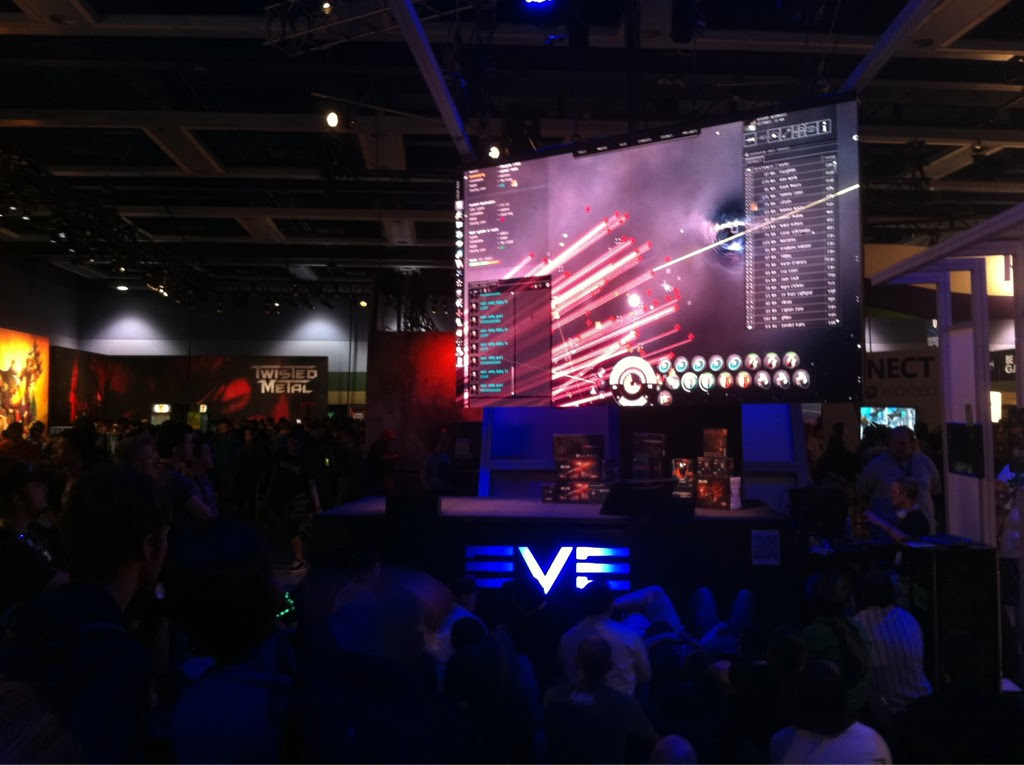 That said, I was prepping for the low-sec mom when this picture was taken, and didn't participate in the second day's LE.  All in all, the Saturday LE was an amusing diversion, but nothing I have a strong need to do again.
Posted by Jester at 3:55 PM