Here's something odd.  I'm still getting mail from Perpetuum Online.  I started to delete it, then the second paragraph caught my eye:


As announced in our Sept. 28 devblog (http://blog.perpetuum-online.com/posts/2011-09-28-attributes-extensions-and-sparks/), we are revamping the extension and attribute system, and as a consequence, the account reset feature will be removed from the game.

Revamping the extension (skill) and attribute system?  Let's look at this devblog and see what they're doing-- 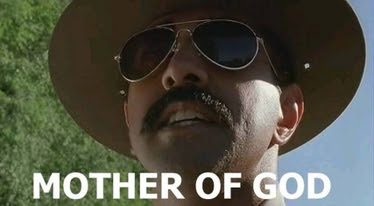 Perpetuum Online is deleting attributes from their game entirely!

Here's their reasoning, and it's custom-designed to make an EVE player laugh:


We've been internally debating the issue for a long time now and we have finally come to the conclusion that attributes are not necessary. They are pretty much an unneeded annoyance, and while they seem to make the game more complex and deeper, they do not contribute to it in an entertaining or useful way.

You're removing complexity for because complexity in and of itself doesn't add anything to your game?  There are several thousand EVE players here with pitchforks and torches that would like to have a word with you, Perpetuum.  ;-)

But if that wasn't bad enough, there's more!  They're gonna try to use logic on us:


The problem with attributes has always been that you have to make important choices at the very beginning of the game. However, at that point you usually don't have the slightest idea what they will mean for the future, and you don't even have any chance to make adjustments later on. Obviously this can be a very frustrating experience for our new players.

The more I think about this announcement, though, the more that it's driving me nuts.  Stop and think a minute.  What are you training... right now?  What are you planning to train over the next month or three?  If you're like me and you have more than one account (I have four), then that list is probably pretty long.

And I'll bet there's skills on it you have absolutely no interest in whatsoever.

My second combat main is a good example.  Six months ago, I shifted him over to an Intelligence/Memory configuration.  There were some key skills that I wanted to fill in, particularly in the Mechanic track, where it was time to train his four armor comp skills to Level V.  I also wanted him to have Astrometrics V, Cynosural Field Theory V, Jump Fuel Conservation V, and Jump Portal Generation.(1)  There were also a few other odds and ends for those attributes that I wanted.

But now, that's pretty much done.  I can't remap his attributes again until early April or so.  So, his skill plan is now full of... well... crap.  Astrometrics support skills.  Electronic Warfare.  Shield Comp V.  Higher shield comp support skills in general.  If I want to do these things, I have other characters that can do them.  Since there were eight months of skills to train that I really wanted, it made sense to move him to the INT/MEM configuration.  But now that the things he needs are done, now I'm effectively gonna waste four months or so training skills that I have no plans to use with this character.  They might come up, sure.  But they probably won't.

I'll bet this happens a lot with characters in the 40 million to 60 million SP range (where this character is).  There are no skills that he needs right now that are critical enough to switch to off-attribute training to get them.  Still, there are skills that he's picking up that he probably won't use.

Some time back, there was a plan within CCP to allow players like myself in this situation to buy a PLEX and then use that PLEX to buy an attribute remap.  But that plan was (rightly) kiboshed as being a form of pay-to-win.  When it came up, I joked on Scrapheap and then on Failheap that I was completely against it... but if CCP did it anyway... ummm... I would take advantage of it.  ;-)

But if you stop and think about it, what are attributes doing for EVE except slowing down the fun I want to have in the ship I want to be flying?  What are they doing for skill training except occasionally slowing it down and rerouting it in a lot of directions that we as players don't necessarily want to go?

In that context, this move by the Perpetuum devs is brilliant.  And sure, I could mimic it in EVE by simply flattening all my attributes, and some EVE players do just that.  But I'll bet a lot more don't.  I'll bet a lot more are like me, and reconfigure toward INT/MEM or PER/WIL, and then build skill plans to focus on those areas for a year before reconfiguring back.

But really, we're only doing it because we're gaming the system.  We're min-maxing, the same thing we do with everything else in EVE.  We hate to see that we're training at 1980 SP/hour instead of 2520 SP/hour, and so we rig things so that doesn't happen.

In the process, though, we're making life a hell of a lot harder on new EVE players, and we're directly supporting one part of the learning cliff that keeps people from wanting to join us in New Eden.  We're making the game unnecessarily more complicated than it really needs to be.  There's really no particular good reason why EVE Online can't just give all of us 2500 SP/hour all the time and be done with it.

Removing Learning skills was a brave first step by CCP in knocking the learning cliff down somewhat.  It'd be truly :fearless: to take the next step, though.