Fit of the Week: Face-melting

This week, let's look at the king of the blaster ships, the Megathron.  To have a little fun with it, we're going to do an old-fashioned "compro", comparing the Thron to some competition.  To do this and to set up a somewhat fair contest, we're going to compare the Thron to its most equivalent armor-tanking opponent, a Hellcat Abaddon.  Are there situations where a Thron can beat a Hellcat?  We'll find out.  As a result, the fitting I'm going to use is juuuust a bit wonky.  We're going to give the Megathron all of the advantages against its Amarr opponent:


We're going to keep drones out of the equation for now.  Theoretically, the Thron can launch five heavy drones against its opponent; the Abaddon can only manage three.  If this is important to you, feel free to add that DPS.  For this analysis, though, I'm going to ignore that factor because heavy drones are so rarely used.(1)  If you do use heavy drones with your PvP Thron set-up, please link some KMs in the comments.  I'd love to see them!

Why do we need to give the Thron all the advantages?  Here's why: 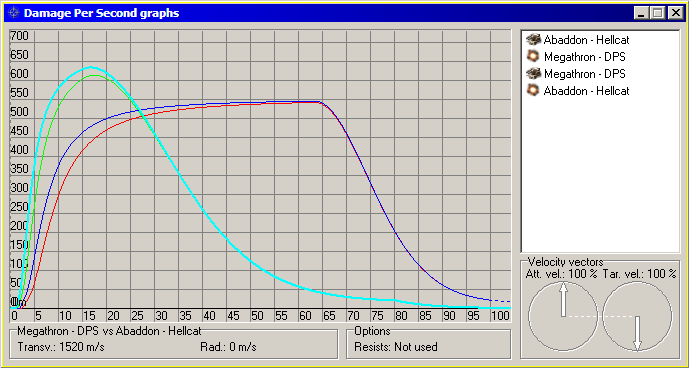 I'm not usually a big fan of DPS graphs.  They ignore a hundred factors that individual pilots can bring to a fight.  Reducing combat in EVE to the raw numbers is almost always a bad idea.  There's nearly always an X-factor in an EVE fight that's far more important than the actual DPS involved.  Still, for the purposes of this comparison, the DPS graphs are useful, so we'll examine them.

The light blue line is our Thron, using Null L ammo.  As you can see, DPS peaks at around 16-17km at more than 640.  Not inconsiderable!  On this graph, though, the Hellcat is using Scorch.  They're the red line.  Its DPS at 16-17km with Scorch is only 450 or so... but approaches and stays at 550 almost to Drake range... 67km or so.  Beyond 20km, the Thron damage drops off very very rapidly, and Null is as good as it gets for long-range blaster ammo.  So if our Thron isn't perfectly placed when this fight starts, he's going to lose, and lose badly.  He won't be able to damage the Hellcat at all.

If the Hellcat can control range, he's probably going to win.  So to even give the Thron a chance, we have to give him the advantage of dictating range.  We're going to spot the Thron a tackler with a point but no web.  All the Thron has to do is apply DPS.  Can he do it?  Can he keep the Hellcat at range?

Actually, he can!  I always smile a bit when people refer to Gallente ships as "flying bricks" and the like.  They're actually surprisingly quick.  Firing Null ammo and eating cap booster charges, our Thron can burn at 822m/s with max skills and has plenty of cap to fight the entire battle.  This significantly exceeds the Hellcat's maximum speed of 698m/s.  So, if the Thron can control the initial range of the engagement, he won't have any trouble keeping the Hellcat where he wants it.

This, incidentally, is why significant changes to Gallente ship mass or speed to balance hybrids is a bad idea.  Gallente ships are plenty quick right now.  It's the weapons themselves that are the problem.  As I said in my previous post, I believe blaster mods should introduce small (1%) buffs to the speed of the ship carrying them, but it should not be overdone, or it will be abused.  And because I feel that other races should have the chance to add blasters to their ships, I'm also not in favor of any Gallente-ship-only changes to rebalance hybrids, at least not at first.

So, the Thron has the Hellcat at 16-17km.  What does the Hellcat do?  He switches to Imperial Navy Multifrequency crystals, of course.  This happens instantly, and our DPS graph changes to this: 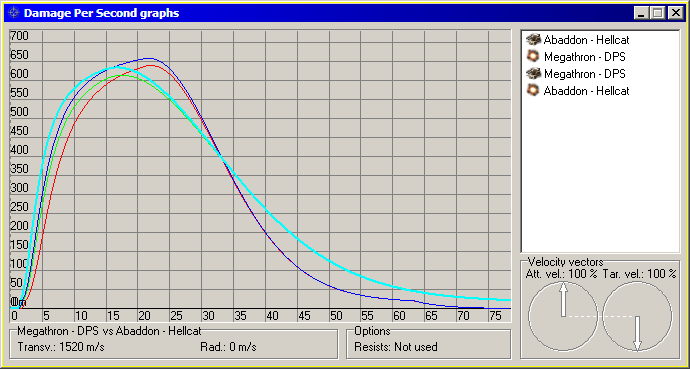 This is very bad news for our Thron.  He's got all the advantages: a Hellcat at close range, right where he wants it.  He doesn't have to tackle the Hellcat.  He just has to melt face.  And yet, he still can't do it as well as the Hellcat can.  And I've given the Throns every advantage.  The tank I've given him is not... quite... optimal.  But where it shines is defeating laser damage.  Still, the Thron has about 120k EHP.

The Hellcat has more than 150.  At this range, the Hellcat will just be entering structure when the Thron explodes.

So the Thron can't win at ranges over 17km.  He can't win at 17km.  Where can he win?  Well, first, he can win at 17km if he's using heavy drones as I mentioned in the footnote.  But again, let's keep drones out of it.  The Thron switches to Navy Antimatter ammo.  Ten seconds go by as the Thron reloads (an eternity under concentrated Hellcat fire), but then at least the picture changes to this: 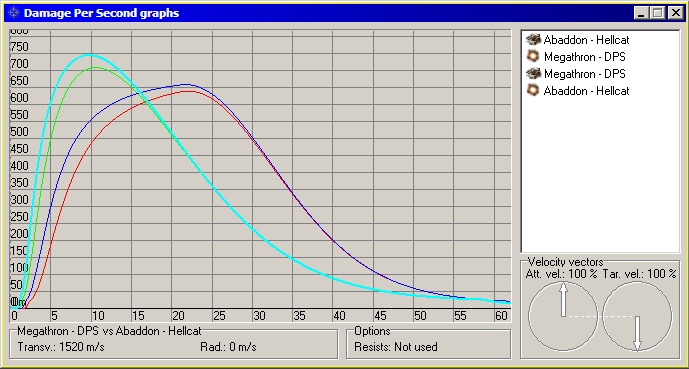 Again, light blue line.  Megathron DPS is now pushing 700-750, again exceeding what the Hellcat can do.

But he needs to pull the Hellcat to 10km to do that.  And there's a downside to that.  To emphasize the differences between the ships, I've maximized the transversal crossing velocity of the two ships, as indicated by the velocity arrows on the bottom right.  As the Thron moves to close range, transversal is going to drop rapidly which will give the IN crystals their maximum damage at that short range.  They'll be doing 650 DPS to the Thron, which is also not something to scoff at.

So, how do Throns beat Hellcats: they pull them to 10km, and maintain transversal once that's done.  That's the only way.  In any other circumstance, the Hellcat is probably going to win.  The chances of pulling off exactly favorable conditions to the Thron are simply too remote to rely on.  And this is a one-on-one fight.  A fleet fight between these combatants?  Forget it.  Too few players these days will have the drone skills to give the Thron the advantage, even if they have the skills for tech2 blasters.  The very short range of the Thron blasters simply makes it too specialized to be a viable fleet battleship.


...proper balancing is not about making everything identical, its about making stuff have the same value, while providing the player with the decision of a different play style.

To that, I responded:


The problem with blasters is not a matter of a different play style. It's a problem of taking a ton of damage in a blaster boat from any possible alternative before you can close range to apply damage yourself. If CCP were going to balance that "style", every blaster boat would have 10-15% more EHP to reflect the fact that they're going to take an ass-kicking before they can close range.

The Gallente boats don't have that.  Amarr boats are much tougher.  Failing that?  Again, blasters need range, not DPS.  Face-melting damage does you no good if there's only one condition under which you can apply it.


(1) Still, I'm not going to completely ignore it, so I'll make it clear here: if you've got a good drone pilot, five tech2 Ogre II heavy drones will add 300 DPS to the Mega's total.  It's not inconsiderable, and it's a damn shame that tech2 heavies have gone out of fashion.  Applying drone damage in general needs a bit of a buff, IMO.
Posted by Jester at 3:01 PM