Serious stuff starts in the post after this one.  But first, a quickie I want to get out of the way.  This post has nothing to do with EVE.  Really.

I've referenced Babylon 5 on the blog a couple of times lately (I'm in the midst of re-watching it now, something I do every couple of years).  And I was reminded of an absolute terrific season two episode, "There All The Honor Lies".  The B-story of this episode revolves around a "gift shop" aboard the space station selling a variety of merchandise.  The episode itself was written by Peter David, who is notable for being the best writer on Earth who is also clinically insane.  ;-)  The creator and normal writer of B5 was J. Michael Straczynski, called "Joe" by his friends and JMS in this blog post hereafter.

Both are hugely prolific writers.  You begin to see why I admire them and B5.  ;-)

One of the pieces of merchandise sold in the gift shop is a teddy bear: "Bear-balon 5", a bear with a little baseball jersey and hat.  The story behind this prop is that Peter David had it made for JMS as a gag gift.  The baseball jersey was embroidered with the initials "J.S."  Completely uncoincidentally, the commander of Babylon 5 has the same initials (as did the previous one).  So David inserted the bear into the story as a prop, as a gift from Commander Ivanova to the station commander, John Sheridan. 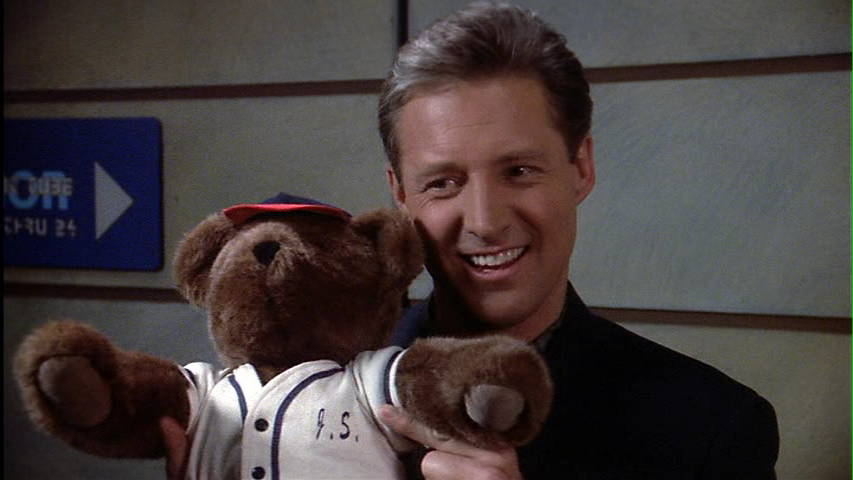 But JMS has stated that he "hates cute."  So JMS came along after David turned in his episode, and tacked a scene onto the end of it where one of the station's fighter pilots encounters the bear floating in space... obviously tossed out an airlock by Sheridan.  "Never send me something cute," JMS wrote about this scene later. 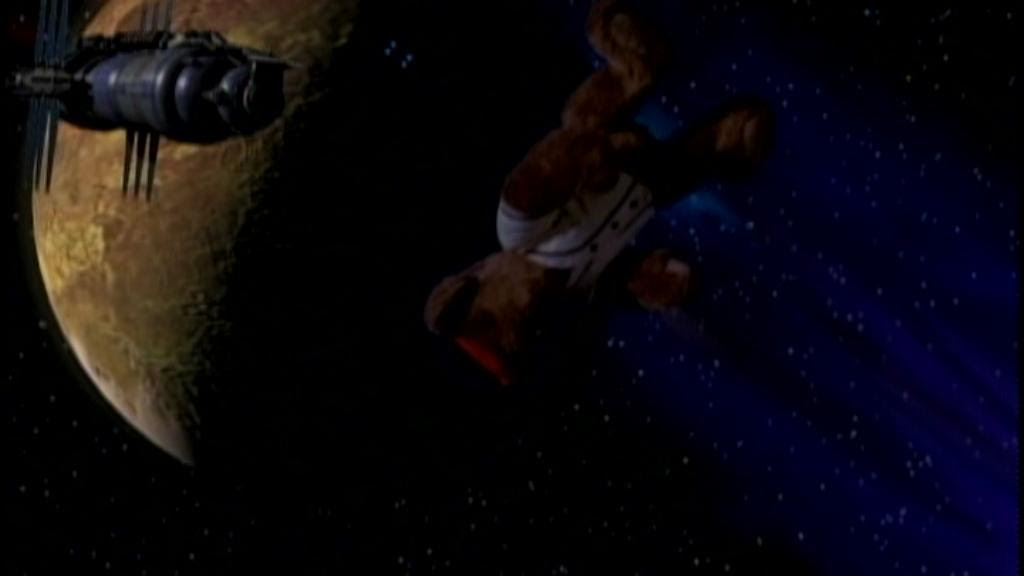 I love back-story stuff like this.  ;-)  Stay with me.  A couple of years later, Peter David managed to get a space-based sit-com green-lit, called Space Cases.  Hardly anyone watched it, though, and it was cancelled after only 27 episodes.  It's notable now for being the project that put Jewel Staite on the map.  The series itself was really clever, though!  And in an early episode, one of the Space Case characters encountered that teddy bear... still floating in space.  "What kind of dope would toss a perfectly good teddy bear into space?" the character asked.  Later in the series, we find out that the bear was tossed into space by an evil race called the "Straczyn".

Hey you!  In the back!  Quit thinking that.  I said this post had nothing to do with EVE.
Posted by Jester at 11:42 AM