I spent some time over my vacation cleaning up some of my EVE files, and I came across this map: 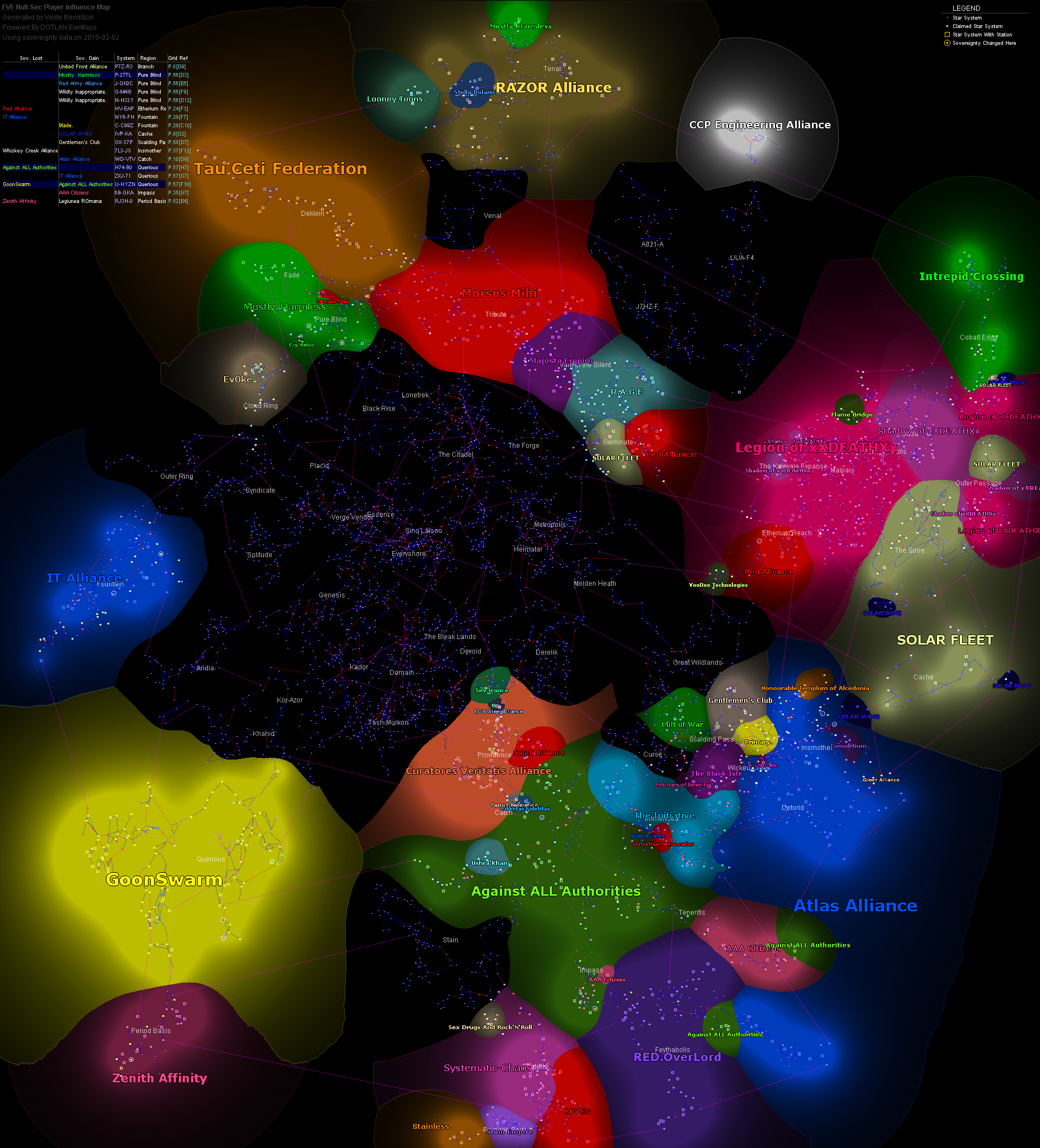 This is a snapshot of the Influence map about 45 seconds before the "Wallet Transfer Fail" that caused Goonswarm to lose Delve to IT Alliance, early February 2010.  That was 20 months ago, not long after release of Dominion.

And the best space in New Eden was Catch/Providence.

Hee.  No.  Not the most valuable space... the best space... for PvPing, that is.  At the time, Catch/Provi was pretty much worthless.  None of the big alliances wanted to hold it, so the bulk of it was held by Curatores Veritatis Alliance, an Amarr role-playing alliance.  Thanks to them, Catch/Provi was full of free ports, which was great.  But nobody needed to use them, which was better.

Take another look at that map, and let your eye roam around the area surrounding Catch/Provi.  You'll find that there are more than 30 alliances on that map within 20 jumps of Provi, from HTA and Consortium on the east to IT and GS in the west.  Not shown on the map are at least a dozen more alliances that lived in NPC space in Curse or the Great Wildlands, or pirate corps that lived in Derelik.  And all of them went to Catch/Provi every night.  A few jumps this or that way, and you'd find small gangs of 15 or 20 ships, fighting it out with other gangs about the same size.  If your scouts couldn't easily find you a fight, your FC could start a convo with other FCs in the area and you'd soon be in one.

When you got a significant portion of your fleet blown up, you'd make the 20 jumps for home, or alternately, the markets of Amarr and Rens were pretty close by.  Roams lasted about 2-3 hours.  If you were in a particularly good alliance, your early evening FC would take you out, you'd blow up some people, come home, reship (usually into something cheaper), and your late evening FC would take you out again.

I'm getting misty-eyed just thinking about it.  ;-)

But it was not to last: by that autumn, the Golden Age of Small-Gang Warfare in EVE was coming to an end.  What's happened since has been well-documented, by me and others.

Mittens is talking about creating a similar "thunderdome" in Delve.  The GSF advance down there is grinding along.  It might succeed.  It might not.  Historically, Goons have always been much better at destroying than creating, so I personally think their push is likely to fail as the Goon-on-the-street gets bored with the objectives there.  That will cause participation to drop and the offensive to stall.  And that's a shame.  I can think of a dozen good reasons why a new small-gang thunderdome is a good idea that should succeed.  I can only think of one reason why it's a bad idea that will fail.

Catch/Provi worked as a small-gang PvP meeting place because so many alliances lived within 15 or 20 jumps of there.  I've said again and again that if you're going to lead a PvP roam, you'd better get your fleet some fights within 15 or 20 jumps.  If GSF succeeds in pushing out the few current residents, hardly anyone is going to live within 15 jumps of Delve.  The region itself is ridiculously isolated.  It's one of the things that makes it so easy to defend.  But it makes Delve a horrid place to site a thunderdome.

Mittens would tell me that I'm an idiot and that the plan includes free ports so that people can live in Delve full time.  I'd respond in two ways.  First, I'm sure that people will be eager to live in a place that GSF members can lock them out of just for fun.  Goons would never stoop to scamming or griefing whole alliances, right?  Stop laughing.  ;-)  Second, even if you assume that people would live in NPC Delve instead, the closest market is still 30 or more jumps away.(1)  That's a bit far to go to the market for some new faction ammo.

So, even if GSF succeeds in sweeping through Delve, I don't think the thunderdome idea there is going to gain much traction.

EDIT (13/Oct/2011): Two really dumb typos in this article have been corrected.  First, I had "west" and "east" mixed up describing some geography.  And second, I talked about Catch/Provi small-gang PvPing happening before Dominion's release when I meant not long after.  *blush*

(1) To be fair, CCP themselves have hamstrung the entire southwest part of New Eden by failing to put more stations into Khanid.  A major market would have sprung up there naturally years ago... if there were someplace convenient to put it, and there were a decent number of manufacturing stations nearby.  Similar border regions elsewhere in New Eden have dozens of stations.
Posted by Jester at 10:49 AM