Quick one looking at Goonswarm Shrugged.

Logarithmic charts are useful for gauging short-term trends.  As long as you don't over-rely on them or try to read too much into them, they can be useful for determining if a short-term trend has "legs."  They operate by damping down differences and looking at orders of magnitude: if something is happening dozens of times a day, it'll show up as a "10" on a logarithmic chart; if it's happening a couple hundred times a day, it'll show up as a "100" and so on.  Large peaks and valleys are flattened, and you look for flat lines: they indicate a steady trend with long-term potential.

Sometimes, if you can find a causative factor in a trend, you can also use the "crossings" on a logarithmic chart.  For instance, when one factor within a trend crosses the curve of the trend as a whole, you can see if the trend will continue despite the loss of a causative factor.  This kind of analysis is useful for watching the decline of a stock during and after the company receives bad news that causes its stock price to fall, for instance.  Once the initial shock hits the stock, will the decline of the stock price continue, or will things bottom out, and if so, where?  This kind of analysis isn't very useful for long-term planning, but for a quick read of a short-term trend, it can be valuable.

With that in mind, here's the logarithmic chart looking at Goonswarm Shrugged ("Shrugged" hereafter): 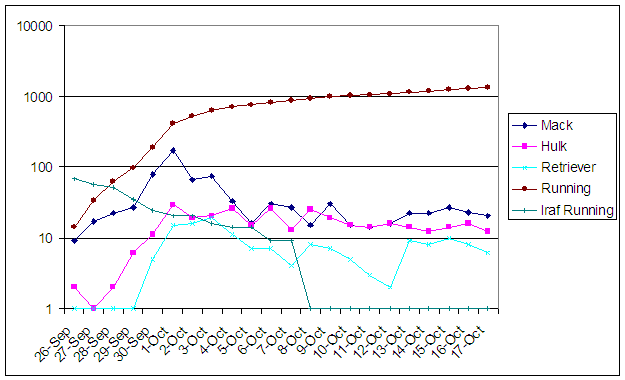 The brown "Running" line indicates the overall trend.  As you can see, things have flattened out nicely.  This indicates that Shrugged continues at a steady pace; overall, Goons are not getting bored with ganking ice miners.  Flat lines for Mack, Hulk, and Retriever kills indicate the same.  Though there was a massive spike of Mack kills around October 1 when the program started, that's settled down and we're seeing a very steady number of Macks die per day since.

Conclusion: Shrugged is looking very steady, with good prospects of becoming a long-term trend.  Anyone who was counting on this being over quickly: I'm sorry to disappoint you, but the data do not support that conclusion at this time.

For my own amusement, I've also included a line to track "Iraf Running".  Mittens has indicated that Iraf Thaiberd is an alt of his.  The Iraf Running line tracks whether Mittens himself is following the trend that he started.  As the data clearly shows, the answer is "no".  Mittens has stopped participating in his own program.  However, the crossing of the Iraf Running trend line with the overall Running trend line indicate that he was a major factor in starting the trend.  His line was actually above or near-equal with the overall trend line for the first four days of Shrugged.  After that, though, you can see he stops being a major factor as Shrugged took on a life of its own independent of Mittens's actions.

The unanswered question is still where oxytope prices are going to peak.  They seem to have stabilized for now at 1000 ISK per unit, a little over double what they were a month ago.  Whether they go higher is going to depend greatly on the sizes of strategic reserves that corps and individuals have stockpiled.  Unfortunately, there's no way to measure that available to the public, though someone in CCP's Statistics team could do it.  Someone there could easily get themselves a Master's Degree in Economics out of this if there's any interest in that direction among CCP's staff.

And of course, the long-term price of oxytopes will depend on Shrugged continuing to move from a short-term trend to a long-term one.  Whether that will happen is based on GSF future actions.  As I said, you can't over-rely on logarithmic charts.  They can't read a Goon's mind.  ;-)
Posted by Jester at 11:18 AM