Call of the wild

Full disclosure: the following blog post is written by someone who is in an alliance that has Rooks and Kings set red.  I don't think this unduly influences the opinions below, but I have disclosed the relationship.  Judge for yourself.


It's easy to say "bring more dictors" until you are the guy who needs to bring the dictor. The biggest change isn't the aggression mechanic -- I don't have a big problem with that -- it's the fact that you can no longer jump, then bubble. So basically, if the dictor drops a bubble on a gate and and the fight isn't already won, the dictor is going to die.

And since nobody really like dying, people are going to stop flying dictors.

Yep.  That's a factor, all right.  Which brings to mind the Clarion Call videos.

Let me say straight out: I am a big, big fan of Clarion Call 1 and Clarion Call 2.  Both videos are -- simply put -- masterpieces.  Not only are they gripping, cinematic stuff, highlighting EVE combat in many forms, they are both highly educational videos.  The tactics used are explained, justified, and demonstrated, and it's left to the viewer to come to their own conclusions as to how effective those tactics are.  Even moreso, the viewer is then invited to -- and shown how to! -- implement those tactics themselves.  Both movies are also tightly written and edited, with nary a wasted minute.

Compared to them, Clarion Call 3 is garbage.

Yes.  I said it.  Clarion Call 3 is garbage.  It is arrogant, windy, over-hyped, under-edited, over-narrated, hugely over-long, and other than nine minutes late in the proceedings that actually shows a fight, it is dull dull dull dull dull.  And that's before you get into its obvious rewriting of history, with everything from skipped losses to not accepting responsibility for bad tactics to its obvious, obvious over-dubbing of Teamspeak conversations during its few battles to make that Teamspeak chatter more dynamic and dramatic.

But really, there's an even worse sin than this going on.

Clarion Calls 1 and 2 had a fatal flaw in my view, in that they overly romanticized risk aversion.  When CC3 was advertised on EVE News 24 as being a video produced by one of "the best PVP corps in the game" and involving another, it was pretty late at night, and in an off-hand way, I posted a comment before I'd even watched it:

Uh... OK. All respect to R&K. Their videos are spectacular and well-produced, and they are utterly fantastic at what they do. But what they do is provide risk-averse EVE players with a godhead to worship.

Dear Heaven, did I catch a lot of flak for that comment.  ;-)  EN24 allows visitors to rate comments, and that comment's rating varied wildly between a high negative number and a low positive one.  One response asked me why I was hating on Rooks and Kings.  And I was stupid enough to actually answer:


It's not hate. I'd have to care more to hate. ;-) But you said it yourself: they pick their fights carefully, and plan how to win them with minimal or no losses. The converse is also true: if they aren't pretty sure they can win a fight, they won't take that fight. Hell, this video itself points out that the events in it span almost a year of planning.

I find it to be a rather stultifying way to play a game, that's all.

If I'm gonna play backgammon with a buddy, I don't take a month to watch how he plays backgammon, watch videos of him playing backgammon with others, learn his strategies and how to counter them, etc. I just get out the board. R&K operates differently, and if that's all it was, that'd be fine.

But they also have the unintended effect of convincing others that this is how everyone should play the game, with an eye toward planning and planning and planning to minimize loss and maximize victory chances. It's an effect on the game I could do without. EVE players are pretty risk-averse as it is without having that philosophy celebrated and championed.

And if my first comment drew a lot of flak, that second one generated a river of flame in my direction.  ;-)  It started out with a negative rating, and the more people that read it, the more negative the rating got.(1)

Go to the Rooks and Kings Youtube "channel", and you're going to find the background image (as of this morning) is this: 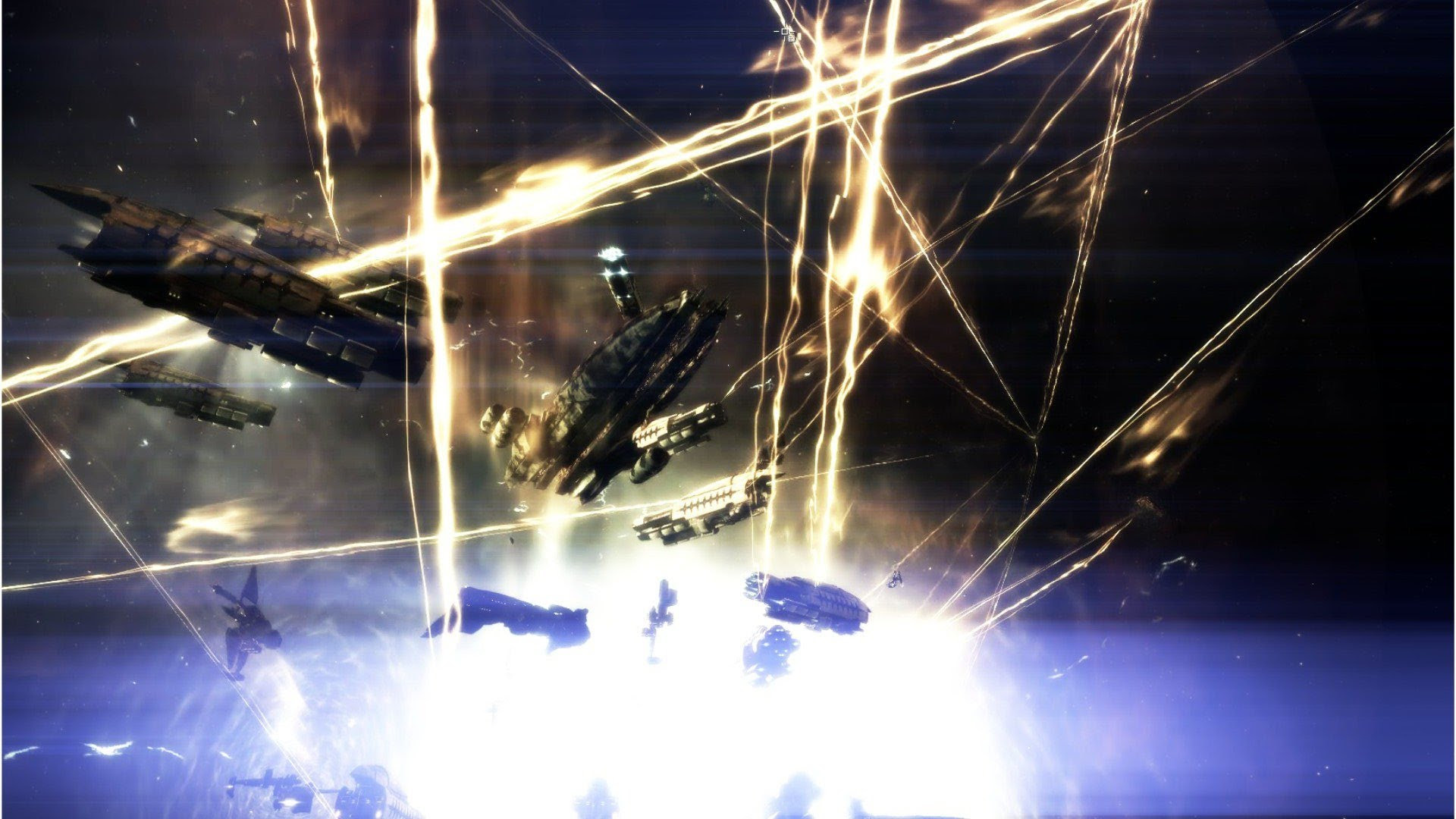 It's a lovely screen-cap from CC3 of a couple of dozen battleships in the midst of a POS bash.  You'll find the actual POS bash in the CC3 video at about the 14:25 mark(2).  But the predominant feature of the image is yellow lines criss-crossing the screen like mad both in the screen-cap and the video.  The source appears to me to be at least eight Guardians.

Guardians... at a POS bash... representing a significant portion of the fleet.  Granted, a lot of them appear to be capping up Abaddons(3), but you know, there are equally valid ways to bash POSs that don't involve Abaddons.  Given the choice between 18 Abaddons and 6 Guardians, or 24 cap-stable POS-bashing Apocs, give me the Apocs.  The job will get done faster.

But of course, using the Apocs will be riskier.

There's a difference, both in life and in EVE, between managing risk and being completely risk averse.  And in my view, far too many EVE players err on the latter side.  EVE players, as a group, are too risk averse and celebrate risk aversion.  An example will suffice.  In the most recent changes to the new player experience before Incarna, CCP added a PvP-focused "combat tutorial" where the intent of the tutorial would be that you would lose your ship to a superior opponent and would have to get used to the idea of losing a ship.

I'd say the intended message of that mission was lost during the strategy sessions.  ;-)

The other night, I was among a Rote Kapelle fleet that took on a much bigger Flatline. fleet.  We had no Logis and only one support ship.  Our opponents had multiple logis (not shown on the BR) and overwhelming support.  The only way this group would fight us was if we jumped into them.(4)  They already had an overwhelming numbers and support ship advantage, and wanted the field advantage, too.  We could have, and should have, walked away.  We had that option.

But what the hell kind of fun is that?

Despite a lack of Logis and support ships, we jumped in, took the fight, and thanks to superior FCing and superior skirmish tactics, we won the fight.  And I have to say, it was one of the most fun fights I've ever had in EVE.  My heart-rate just went up just reliving it.  Did we lose ships that night?  Sure!  But our losses were acceptable and replaceable.  And because we don't typically bring tons of support ships, other fleets will actually... you know... engage us.  So we actually get fights.  So we actually have fun.  Granted, not losing ships is nice, and planning is always a good thing, but I'd rather lose a ship or two and have fun then the alternative... which is not get a fight at all.

And even when it comes down to a fight, Logistics and Falcons are not the only way to win them.  Any PvE'er will tell you that you can beat a mission just as often by bringing lots of DPS and good tactics.  Enough DPS and enough good tactics, and you won't need to cycle that repper you brought along at all.  ;-)

You can manage risk without being risk averse.  The Clarion Call videos send a different message.

Sometimes, you have to answer a different sort of call... the call of the wild.


(1) One commenter told me "they'll stay and fight even if they might lose, you can hear it on their TS in the video!" completely missing or ignoring the rather obvious fact that a lot of the TS chatter in the video was over-dubbed later.

(2) No, POS bashes are not exciting even when they are in a Rooks and Kings video.

(3) Hell, to me, a couple of them appear to be 6x Large Energy Transfer fit, which is interesting.

(4) Which we would do only after we asked them nicely, multiple times, to back off the gate a little to give us at least somewhat of a fighting chance.  ;-)
Posted by Jester at 3:38 PM