Dance with the one that brung ya

There's a funny dichotomy about EVE players that strikes me from time to time.

My two nephews are brothers, of a similar age, and ultra-competitive with each other. They'll occasionally have very impressive physical or mental battles. But if an outsider attacks one of them, the two are instantly united against the outside aggressor. All differences between them are put aside. Thus it is with EVE players. In-game, we're often incredibly nasty to one another, and many are just as brutal if not moreso toward CCP. But there's also a group of these very same EVE players that will instantly oppose any sort of perceived nay-saying about their favorite past-time or the creator of it.

I'm catching the outside edges of the phenomenon lately, so I feel the need to further explain the "Patchwork" post from yesterday (among others). I find this comes up when something extraordinarily positive appears on EVE's horizon, I praise 47 aspects of it to the skies, but I also issue a caution about the two or three less positive items that also appear. Invariably, someone will comment that "Jester's being all bitter again."(1) Maybe it's the number of paragraphs I spend on the good versus the bad? It's hard to write at length about stuff that's clearly good. You people are pretty smart and don't need me to say why the good stuff is good, right? ;-)

As someone who enjoys word games, I assure you that I chose the name "Patchwork" for the post yesterday deliberately. A patchwork quilt is a blanket sewn from many disparate pieces of often mismatched fabric that nevertheless forms an aesthetic and pleasing whole. But I should have realized the word also has an undeserved negative connotation, and that connotation was not really intended. I find patchwork quilts quite beautiful.

But patchwork quilts aren't usually organized or structured like a more traditional block or tiled quilt.

Let me be completely clear here: I think the winter expansion is extraordinarily positive. I believe virtually everything in it is a positive change for EVE Online, and there's almost nothing in it this expansion that I think is a poor design or game change. If I hadn't already resubbed to EVE months ago, this expansion would have gotten me to resub.(2)  Is that clear enough? Do I have to write more paragraphs around this? I will if I have to. Don't make me get my good keyboard out. ;-)

Now, with that said, the issues facing EVE and CCP have not gone away. EVE still needs a larger subscriber base. The winter expansion isn't going to do very much to help that. Here's the current marketing website for the winter expansion, and granted, it's out of date and doesn't include a lot of the winter expansion's features. It also includes a few features that either definitely (AFs) or probably (FW) won't take the cut. Even after the list is complete, though, CCP's Marketing department is going to have a very tough time selling the Crucible to brand new EVE players. It's absoultely terrific for bringing back lapsed hard-core EVE players. That will help stabilize CCP's numbers.

But have a look at this chart from this year's Fanfest: 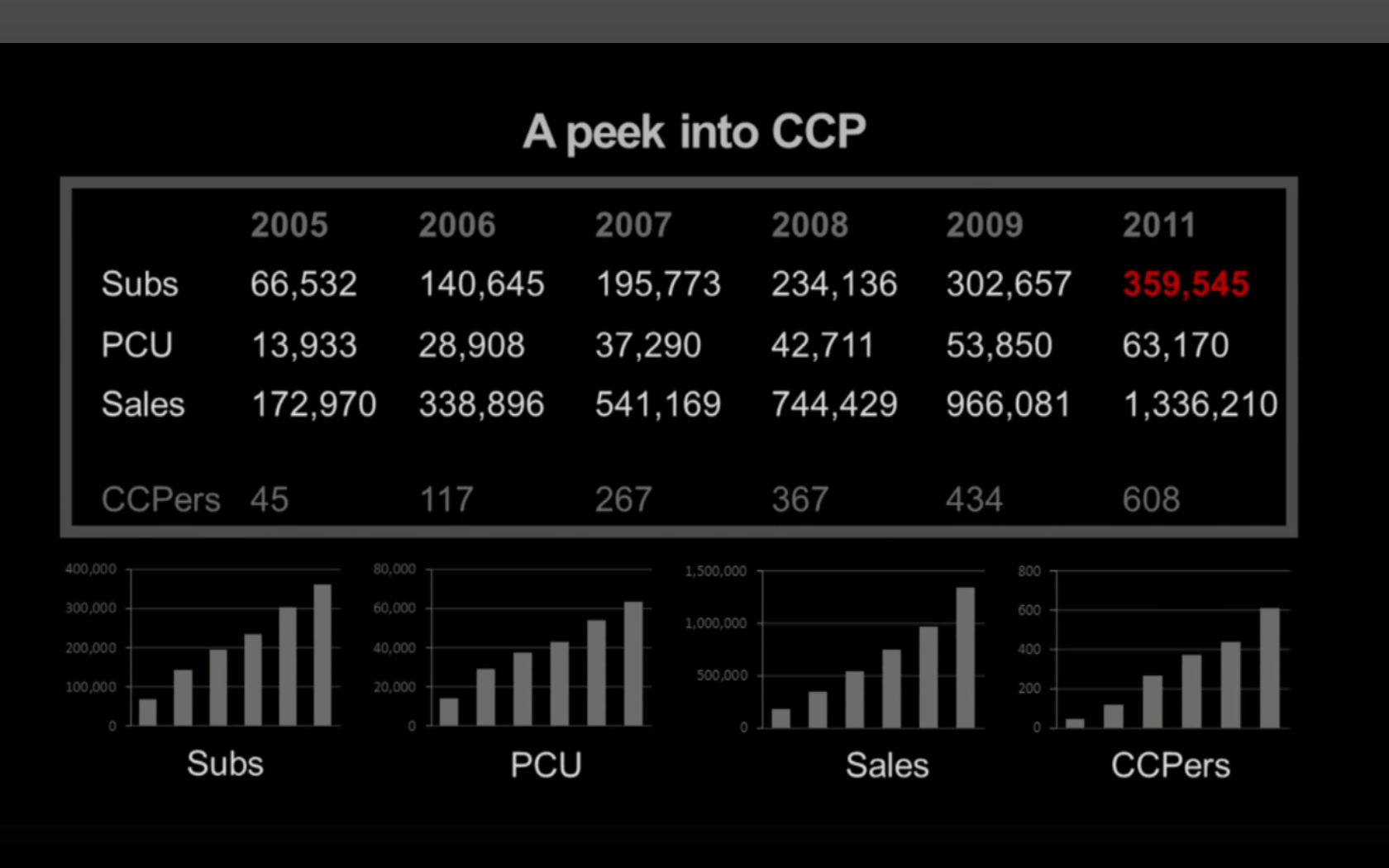 Think CCP is going to be content with "stable"? Think they should be?

With Incarna going on the far back-burner, the problem of building an "elevator pitch" for EVE also remains a major issue. EVE continues to be a hard product to package, market or sell, and again, Crucible does little to help. It's aimed squarely at people who already know what EVE is. Within that limited scope, it should be extraordinarily successful. But unless I miss my guess, it's not going to greatly expand EVE's base beyond where it's already been.  CCP definitely wants to find a solution to this problem.  There's no question about it.


(1) I do invite you to reread the introductory paragraph at the very top of this blog, though. ;-)

(2) Though as I said at the time, I resubbed in part because I wanted to push CCP in this direction and felt my blog would be a good way to do it. I wanted to be part of the fight for EVE's future.
Posted by Jester at 10:31 AM