Pic of the Week: TANSTAAFL

For some of you, though, all the resubs have a dark side, and here it is: 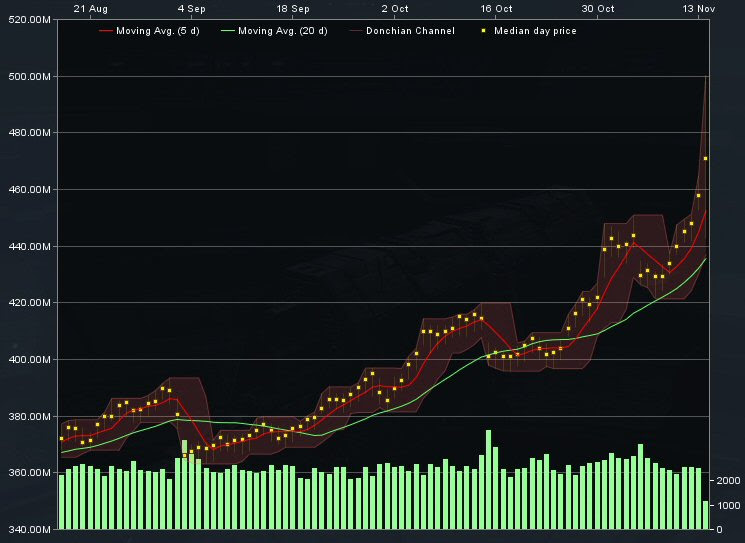 That's PLEX prices in Jita over the last 90 days.  As you can see, they'll almost certainly soon be spiking over 500 million ISK.  The smaller markets are having no trouble keeping pace.

Easy likely cause, too: some of those people that say they're resubscribing aren't.  They're using the bankrolls they amassed over five or six years of play to buy several PLEXes each.  Average volumes were slowly edging upward toward about 15% higher volumes... right up until the price increases started depressing the volume again about ten days ago.

The effect may or may not have been emphasized by speculators: the nearly double-size spike in volume a month ago is interesting.

The question is what impact this is going to have on the casual EVE players that rely on hand-to-mouth PLEXes in order to keep playing.  I've certainly seen more than one player saying they had "three days to grind up a PLEX" or like statements.  And there's a lot more of this type of player than there are resubbing bitter-vets.  If the market doesn't stabilize, EVE could lose more players than it gains.  This obviously isn't something that CCP wants, so I guarantee you they're looking at these numbers very closely.

DrEyjoG has said in the past that if need be, he would manipulate the PLEX market if CCP felt that PLEX prices were going out of bounds.  He hinted at one of the summits this year that this hadn't happened yet, but has also said that if it did happen, he wouldn't share that information.  It's probably low-risk, but it's something you'll probably want to keep in mind if you're looking to jump into the market yourself.

But of course, it means there's another way of looking at those spikes, one last month, one in September: the tin-foil hat way.  ;-)  Given that both of them quickly resulted in reduced PLEX prices, one could speculate that CCP has already engaged in market manipulation... and that it didn't work.