Today's a good day to visit the Singularity test server, if you haven't already.  Most of the changes that were put into the database, then leaked, are now up and running and ready to be played with.

Still, a good solid majority of the other changes are in.  You can now play with T2 probe launchers, T2 gang-links, T2 siege modules, T2 triage modules, and the like, if you have the appropriate skills to do so.  People are already plotting and planning the invention processes that will be needed to get those all-important first few mods onto the market as quickly as possible once the winter expansion goes live.

The first few fittings for newly-upgraded hybrid ships are also leaking out of various fora.  Right now, I think I'm most intrigued by the possibilities for sniper Rokhs.  Long-range Rokhs are considered so bad right now that the current best Rokh fitting out there is actually fit with 1400 arties, doing a 11k alpha or 500 DPS at 30+44km, or sniping to 112km with Tremor, doing a 6500 alpha or 300 DPS.  You can occasionally spot them with Alpha fleets, where they can match Maelstrom alpha while featuring a slightly stronger tank.  It's easy to say that the equivalent rail Rokh, which does more DPS but less alpha at those ranges, will only see a 10% bump in damage.  But that ignores the decreased grid needed for hybrids.  Virtually every Rokh fit uses RCUs, Ancillaries, or both to fit its weapons today.  Many other large hybrid boats do the same.  Once those low and rig slots are freed, who knows what kind of fits will come out of the woodwork?

So I think the reduced grid for hybrids is going to turn out to be the most important buff of all.

This won't help the medium rail boats very much.  Most are using fitting mods, true, but most are also using 2-3 Magnetic Field Stabilizers in addition already.  This will result in greater flexibility, but not much more damage.  Rail Feroxes, for instance, will have more tank after the expansion, but shouldn't be doing much more DPS, and Eagles (as I've already said) won't be helped in the slightest.  As for the T1s, rail Moas will continue to be unheard of.  I continue to hope that medium rails will get a larger damage buff than their counterparts of other sizes.  For now, the 10% on-paper damage buff will be it for medium rail boats, and it won't be enough for them to see any significant use.

Blaster boats will tell a very different story.  The Deimos will benefit the most; it's very very tough to wedge Neutron Blasters onto a Deimos today.  Once the winter expansion hits, it should be trivial.  We'll probably see some creative Thorax fits; right now the Thorax is CPU-constrained, not grid-constrained.  Still, since hybrid CPU requirements are also being lowered, I think it's quite likely we'll see Neutron Raxes become common as well.  Blaster Throns won't change that much, and will mostly benefit from increased tracking.  Fitting a blaster Thron today is actually pretty easy.  The Vindicator and Vigilant will go from being monstrous to being terrifying.  The best Vigilant fits require quite a bit of Yoga to wedge on a plate, Neutrons, and a MWD.  That math will also become trivial come winter.  Vigilant prices are skyrocketing as a result, approaching 300 million for a single hull.

There's also a second set of database changes on Sisi as of yesterday.  The bulk of them are a bug fix.  It was very clear from the start that CCP intended to buff the agility of hybrid boats, but instead, they accidentally nerfed them.  This is now corrected.  All ships that are primarily hybrid boats -- even the Falcon! -- are getting an agility buff.  The speed buffs in the previous update are also included.

Finally, there are three other sets of changes that are also important.

First, corporation bookmarks are included!  Tsubutai on Failheap was clever enough to catch this first, I believe. 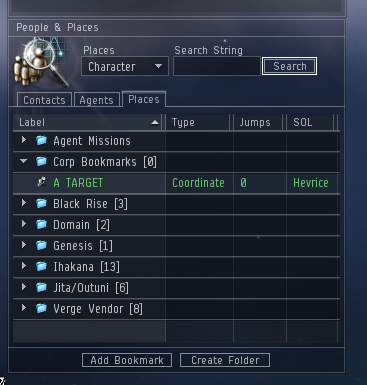 On Sisi, it apparently takes 5-10 minutes for bookmarks to propogate across a corporation.  It will be important to see if this is the same on Tranquility when the winter expansion hits.  In wormhole ops, for instance, once your scout returns with all of the bookmarks needed for PvE ops, the process today is to copy those BMs into a can and have each pilot on the op individually pull those BMs.  That takes more than 5-10 minutes today, and the idea of just propogating them as corp BMs is much, much superior.  Still, faster is going to be better on this one, so hopefully CCP makes that a priority.  And making the distribution of tactical BMs easier for PvP corporations, though less time-critical, will be just as important.  As someone who has been bitching for corp bookmarks for quite a while now, I'm thrilled to see my personal pet issue being implemented at last!  Well done, CCP!(1)

Second, I'm gonna go ahead and take credit for what's happening to the Oneiros.  ;-)  A couple of months ago, I posted a little thought experiment that featured a cap-stable Guardian fit that was better in the Oneiros's own role than the Oneiros itself.  I concluded in that post that the Oneiros needed 200 more grid and needed to trade a mid slot for an additional low slot.  And that's exactly what's happening.  Maybe some ship designer in CCP read my post and felt sorry for the Oni.  ;-)  Incursion-runners will probably be annoyed at having to refit expensive dual-ACR2 Onis, but it'll be worth it, I think.

Finally, all four of the new tier 3 BCs are getting significantly nerfed before they even get released.  All four are being reduced from Recon-quality tanks down to T1 cruiser-quality tanks.  More significantly, all four are also having their mass significantly increased; this should result in speed reductions of 250-300m/s across the board.  More significantly than that, all of them are also receiving large fitting nerfs.  The Naga is being hit the hardest, and is losing a low slot, two role bonuses, 40 grid, and 45 CPU.  It will be a "dual-bonused" ship for weapons, keeping the hybrid range bonus and the torpedo velocity bonus.  That drops it to the least impressive of the four.

The Talos is second-hardest hit, losing its drone bay and its 90% web, but gaining a tracking bonus and a speed increase.  CPU and grid are dropping by 40 and 50, respectively.  The Oracle is also being hit hard, losing its best-in-class tracking in favor of a cap usage bonus and seeing its range bonus traded for a damage bonus.  It's also losing 50 CPU.  It's easy to see where these three changes are coming from: someone clearly tried out flights of the newly-buffed destroyers on these three tier 3s... and the destroyers got themselves murdered.  That's clearly unacceptable, so every one of these nerfs affects the ability of these ships to track and destroy smaller targets.  If these ships are a rock aimed at the scissor of capital ships, CCP obviously wants to make sure that paper still covers rock.

The Tornado is least-affected of the four, only receiving a 30 CPU nerf, which will nevertheless make fitting it much harder.

Still, nerfing these ships was the right thing to do.  As I've said already, they were too scary in their initial form.

Whew!  Lots of stuff going on!  Again, if you haven't gotten on Sisi lately, I strongly encourage you to do so.  There's a terrific Sisi Launcher Tool that makes trying out Sisi trivial on Windows.  No Mac version of this yet, unfortunately, but the linked page includes instructions for manually configuring a Mac Sisi client.