Week in the Life: Heavy fuel

Here's a week (well, ten days) in the life of the least regarded of the ice products, Heavy Water: 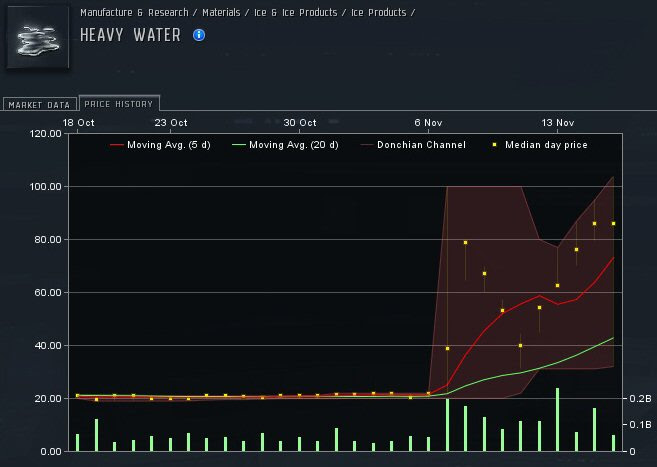 Market speculation, in my EVE?  What's going on?  Well, you can blame the starbase changes that were announced on 7 November.  In that devblog, CCP Greyscale announced that the five POS fuel PI products and three ice products would be converted into "fuel blocks".  Those fuel blocks would consume:
I blogged about it the day that it happened.  The one thing I didn't blog about that day was the distribution of fuel, because I wanted to see to my own strategic reserve first.  ;-)  Anyone smart who maintains a capital ship or POS keeps a strategic reserve of fuel on hand to shield themselves from fluctuations in the EVE market (and to potentially profit from such market fluctuations).  I am no exception.  As I said in that blog post, I have a medium faction POS, and I had a year's worth of fuel for it in reserve.

Turned out on the 7th, I didn't have a year any more.  I had varying quantities that might or might not equal out to a year, and I wanted to make sure that I bought additional stocks of the missing bits as needed to get my strategic reserve back up.

My POS was used for research.  Fitting a POS is like fitting a ship or a PI colony.  There are POS modules that eat grid or CPU just like your ship fittings do.  Weapons tend to eat grid.  EWAR tends to eat CPU.  POS shield hardeners eat both.  Research POSs use Mobile Laboratories, which eat CPU... a lot of CPU.  POSs consume all types of fuel in equal measure, except for Heavy Water and Liquid Ozone.  The more grid your POS uses, the more LO it consumes.  The more CPU your POS uses, the more Heavy Water.  With me so far?

However, my research POS is not the typical example.  There are lots more armed POSes out there than there are research POSs, and most or all of those POSs didn't require all that much Heavy Water.  That's why that commodity has been stuck at 20 ISK/unit for months or years, whereas most ice products are worth more.  But now, there were going to be a lot of alliance and corp POS managers that were going to have to greatly increase their Heavy Water stocks.

Before and after this change, my medium faction POS consumed fuel in the following quantities, per month:


As you can see, things changed quite a bit.  My PI products were generally in line.  I needed a few more of some things for my reserve (like Oxygen), and less of others (Mechanical Parts, Robotics).  But I was going to build up my ice products some.  I'd need a small additional quantity of Heavy Water.  But my strategic reserve of Liquid Ozone for my POS was about 100,000 units.  After Crucible, I'll need almost 500,000 units: five times as much!

But for most POS operators, the opposite was true: they need four or five times as much Heavy Water.

And that's why you're seeing the spike in Heavy Water prices the last ten days or so.  It's impacting Liquid Ozone too, but not nearly as much, since LO is used for other activities as well (notably, lighting cynosural fields).  On the flipside, as the impact of this change starts to spread, you'll probably see Robotics prices fall a bit, since they won't be as universally useful.

Every time patch changes are announced, you see this sort of market speculation.  And it's no different from Wall Street once it's announced: those that respond quickly make ISK, while those that miss the implications get the shaft...
Posted by Jester at 8:02 AM