It's time for another short history lesson, where Jester Makes History Fun.  Are you seated comfortably?  Then I'll begin.

In 1812, the Governor of Massachusetts was a man named Elbridge Gerry.  Gerry was a mover-and-shaker in early U.S. politics: he was one of the first anti-British politicians in the Colonies, was a signer of the Declaration of Independence, and was one of the lesser-known "founding fathers" who attended the U.S. Constitutional Convention in 1787.  He refused to sign the Constitution until it included a Bill of Rights, and was one of three men that really pushed for that addition to the document.  Once that was done, he became a staunch supporter of the new Federal government, served in the newborn U.S. Congress, was an important U.S. diplomat, was Governor of Massachusetts and later, Vice President of the United States.  This is an important, if forgotten, guy in American history.

In early spring of 1812, as governor of Massachusetts, Elbridge Gerry signed a bill into law that redrew the district lines of the state after the census a couple of years prior.  Gerry was a member of the "Democratic-Republican" party, who were in close contention in Massachusetts with the "Federalist" party. 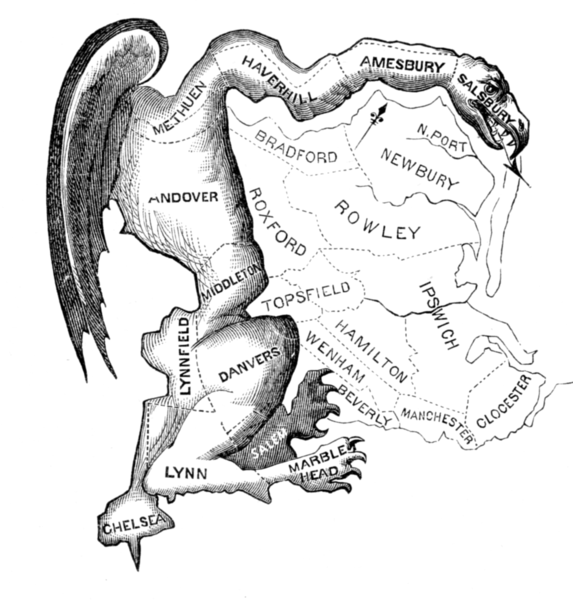 In an attempt to reduce the influence of the Federalists, Gerry drew the district borders in Massachusetts such that all the regions that Federalists tended to live were encompassed within this one voting district, while the Democratic-Republicans controlled several of the surrounding and surrounded districts.

The resulting Federalist district was a contorted, crooked mess.  A political cartoonist at the time redrew the district to resemble a winged and clawed serpent.

That serpent was quickly dubbed a "Gerrymander".  And from that day to this in the U.S., "gerrymandering" describes changing electoral law or redistricting to benefit an incumbent party in office in the next election.

Warning: I believe virtually none of what follows in the rest of this blog post.  But it was fun to think about, and fun to write.  Tin foil hats, ON.  ;-)

The CSM December Summit is now over, and seems to have been a complete success, much more relaxed than the last several summits.  I'm looking forward to reading the minutes, but it's a good bet that they'll be mostly bereft of drama.  However, on the first day of the summit, one of the sessions was "Future of the CSM", the promised relook at how the CSM is selected and its purpose.  True to form, CSM6 has been pretty quiet overall about what went on at the summit as a whole so far, save for one blog post written by Trebor.  Trebor also wrote very short posts on the EVE-O forums about what happened each day.  About the Future of the CSM summit, he only says this:


Future of the CSM: Discussed possible changes to the makeup of the CSM and the election process, with the goal of making the CSM as representative of the community as possible.

Which says some intriguing things while at the same time saying nothing at all by virtue of these "changes" being "possible."

And of course, this session wasn't the whole story.  CSM6 has had months to discuss this topic, since it first came up in the Eurogamer interview that Hilmar gave, which I've talked about here already.  And there's good reason to believe that the topic had been discussed a fair bit before that interview, too.

If you were a member of CSM6 that was looking to get reelected to CSM7, the fact that you now have a good handle on how CCP intends to make the CSM more "representative of the community as possible" would be quite an advantage, wouldn't it?  And it's an advantage that will only be available to non-CSM members when the minutes are published, whenever that happens to be.

As I said a few paragraphs ago, I don't believe this is actually happening.  For one thing, I think it's pretty likely that several of the current CSM6 members either won't run for CSM7 or wouldn't be reelected if they did, no matter what they do.  Others are assured of reelection if they will but run.  Still, like I said, it was fun to think about over the weekend.  ;-)

In the meantime, thank you to CSM6 for your work at the December Summit, and I look forward to reading the minutes!
Posted by Jester at 9:59 AM