The land and the people are one

Despite being an occasional and closet role-player (I was raised on old-school D&D, like I suspect many of you were), I've never really been able to get into EVE's setting.  Sure, I know the basic histories of all the races, and I know most of the recent political "history" and even some of the more distant history.  I know the difference between a Guristas pirate and a Sanshas pirate, I know why the Genesis region is called that, and I know why drones sometimes go rogue.  I have a copy of, and have read most of "The Book" that turnschuh produced.

But I've still never really cared much about EVE's setting, and I've never once been tempted to role-play as one of my characters.  I think I can safely guarantee right now that you'll never read a IC story here written from Ripard Teg's perspective.  ;-)

Building a historical under-carriage of a created world has always been a weakness in sci-fi and fantasy settings.  J.R.R. Tolkien is credited with supposedly doing a lot of background work for The Lord of the Rings, but if you dig more than two inches beneath the top-soil, you'll find there isn't much there for a budding archaeologist, much less a paleontologist.  Compare and contrast created sci-fi and fantasy with even the most basic historical novel such as Ken Follett's The Pillars of the Earth or Edward Rutherfurd's Sarum and you'll quickly discover how pale and shallow the historical under-carriage of all of our much-loved classics are.

And The Lord of the Rings is a master-work of historical pre-work compared to most modern sci-fi and fantasy.  I laugh and laugh every time I think about all the pre-work David and Leigh Eddings supposedly put into The Belgariad series of books.  Don't get me wrong: these are lovely books, and a terrific way to introduce your kids to the broader works of fantasy after they outgrow Harry Potter.  But to imply that they are somehow connected to thousands of years of recorded history is laughable, and this is drawn in sharp relief when you try to slog through the painful, wretched experiences of the two "prequel" novels that take place fully within the pre-work history. 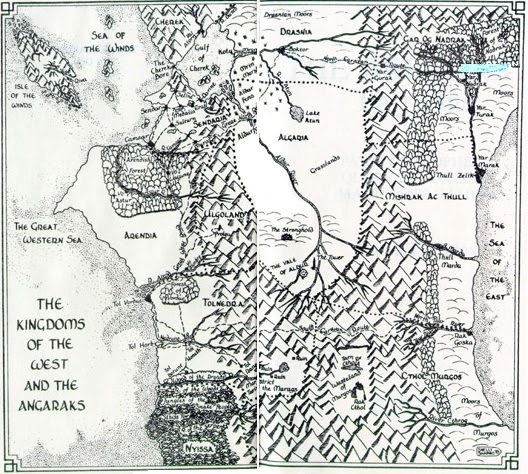 Nowhere was this more apparent than in the maps included with the original books, a tiny continent bordered on one side by The Great Western Sea and on the other by The Sea of the East (natch).  In what was supposedly the southwestern corner of this continent lay the nation of Nyissa, a place of jungles, drug addicts, and snake worshipers.  Why were they drug-addicted snake worshipers?  Because they lived in a jungle filled with snakes and narcotic plants, of course.  Circular logic much?  The border of this jungle was a river set on the north border of the Wood of the Dryads (guess why it's called that), and this forest was bordered by the river.

Because trees only like the south sides of rivers, not the north side, that's why.

Needless to say, this map was the subject of much retro-continuity both while the book series and the ones that followed it was being written, and in the years since.  Later maps made it clear that the actual world was much bigger than the one originally shown (and that trees usually like both sides of rivers, too).  But that didn't stop the people of Nyissa from being drug-addicted snake worshipers for thousands of years, from the first pages of the first prequel novel to the last pages of the 12th novel in the eventual series.

Some properties are better at building and developing their back-stories over time.  The Belgariad?  Not so much.  Compare and contrast here with The Elder Scrolls series of video games.  I might not agree with all of the cultural changes the ES games throw into the mix, but you can't deny that they've done a pretty good job of building and then developing their back-story and culture over the hundreds of years the games span.  The first time I heard an NPC in Skyrim swear "By the Eight", I literally stopped, turned around to look at him, and said at the screen "What did you just say?"  (The ES games have had nine major gods since the beginning.)  I then stopped what I was doing and went out of my way to find out why, exactly, that NPC had said that.  ;-)  And yes, there was an answer to that question, and yes, that answer turned out to be a good one, and satisfying.

But even the ES games still trip over this problem, in the way that all Nords come from Skyrim and all Dark Elves come from Morrowind and all Bretons come from High Rock, yadda yadda yadda.  The ES games at least attempt to justify this by isolating the homelands of the races by way of broad oceans and high mountains, but it doesn't help you escape the conclusion that all Nyissans are drug-addicted snake worshipers, and have been so for thousands of years.  The land and the people are one.

Which brings us back to EVE Online.

Not long after the new nebulae became public on SiSi, The Interstellar Privateer blog did an absolutely marvelous piece showing off the new nebulae, with screen shots of virtually every region.  He even managed to snap a picture of a Jove region nebula.  And just the fact that there were "Jove region" nebulae got me thinking about this topic.  I'm a Falcon and Rook pilot from way back, and it's always been a point of order that you use red jammers against Minmatar ships with their red backgrounds, and yellow jammers against Amarr ships with their yellow backgrounds.

And isn't it great that the galaxy knew that, and made allowances for it when the galaxy was created?  ;-)

After all, when all of these nebulae were presumably created millions of years ago, there were no humans living in these regions yet.  The New Eden Gate had not yet been opened.  So isn't it convenient that Minmatar space had red nebulae, as if the galaxy knew that there would be a people living there someday that would be oppressed, and then would eventually as a race escape their captivity and develop their own culture, and would all end up living under these red nebulae.  And isn't it equally nice that the galaxy knew that one day, the Caldari people would break away from the Gallente Federation, taking for themselves only those systems that had friendly-looking blue-grey nebulae and leaving behind all those systems where the nebulae were green?

Quite convenient, don't you think?  ;-)  The land and the people are one.

Of course if there's something else going on, for instance that New Eden is somehow alive and the nebula change based on the actions of the people, I withdraw my objection.  Maybe.
Posted by Jester at 1:49 PM