Back when I was writing a lot about Perpetuum Online, and comparing it to EVE, I made a list of eleven things that I thought Perpetuum got really, really right.(1)  #4 was:

Nowhere is this more apparent than in the meta system for Tech 1 modules.  Now first, before I get bitched at, I get why there are meta modules, and I even get why there are four of them most of the time.  Each meta module represents an improvement made to the module by one of the major four races for their own use.  I even get that sometimes, it's the Caldari improvement that's the meta 4, and sometimes it's the Amarr, or the Gallente, or the Minmatar improvement.  Get that.  Hell, I even get that there are naming conventions for each race and sometimes, I can even tell you which meta mod was supposedly developed by each race.(2)

But this does not make the meta mods any less annoying, obnoxious, or pointlessly complicated.

Every few weeks, someone starts a thread on the EVE-O forums about why this or that meta module is better or worse than this or that equivalent Tech 2 module.  Kirith Kodachi wrote what I feel is the definitive guide to how to choose between the "best" meta item and the tech 2 item in each category.  And if someone who notices the thread is on the ball, they are pointed to that guide or one like it.

Now, don't get me wrong: I'm not arguing against the existence of meta mods... just their needless complexity.  The meta mods add not only flavor to the game, but they add an interesting choice for PvPers and missioners that recognize the differences: do you go with the less expensive manufactured T2 mod, or do you go with the meta 4 mod that's just as good, has a lower fitting requirement... but costs four times as much?  Poetic Stanziel, over on her blog, made an argument for renaming the meta mods en masse and I'm not sure I agree with that, either.  If you rename them, aren't we just doing the old D&D thing, replacing a "Longsword +1" with a "Longsword +2"?

Still, there's no question that the meta mod naming and how they're handled in game is making things needlessly complex for beginners.  If you doubt it, ask yourself this: when you go to fit a meta mod, do you look in-game for the one you want?  Or do you load up EFT and look for the mod that's just above the T2 mod and only then search the market for that one? 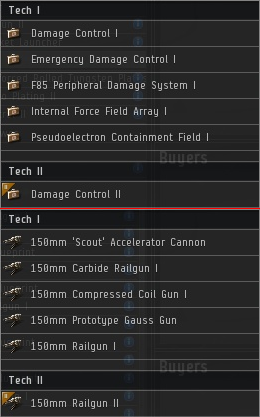 It's tempting to just say "CCP, this is overly complex!  Fit it!"  As I've mentioned once or twice on this blog, sometimes CCP just prefers that you point out the game's issues and let them come up with ways to fix them.  However, I'm going to take it two steps farther this time.  First, take a look at the pic to the left.  It's one that Poetic came up with for her own blog entry.  You'll note that the Tech 1 items are sorted in alphabetical order.  This.  Is.  Dumb.  For two reasons.

First, on the Damage Controls, the Damage Control I (meta 0) happens to be on the top of the list because nobody came up with a "A", "B", or "C" for a meta Damage Control mod.  ;-)  But for the Railguns, the meta 0 version is on the bottom of the list.  I happen to know that the IFFA is the meta 4 Damage Control mod, but the order the DCs are shown implies that the Pseudoelectron version (meta 3) is better, which it is not.  The Railguns are in what is essentially random order from top to bottom.  That's needlessly complicated and extremely easy to fix.  So, suggestion one:

When displaying the mods list on the Info dialogue, CCP, please display them in meta order, not in alphabetical order.

This should be a very easy UI fix that one of your UI experts can take care of with minimal effort.  Second, it's virtually always the meta 4 mod that's the most valuable to EVE players.  As I've already noted, meta 4 mods are often more valuable than Tech 2 mods.  At meta levels of 5 and higher, there is a special symbol attached to the upper left corner of the mod to designate its special status.  Meta 5 (Tech 2) mods get a "II" symbol.  Higher metas -- representing faction, dead-space, and officer mods -- get their own special symbols as the meta level increases beyond 5 into the double-digits.  A mod with a little white circle or a white star on a green or purple background demands immediate attention.  Here's a thought: let's take this down one notch!

Give meta 4 mods a symbol in the upper left corner of the mod to designate their special status.  I suggest a small black "4" on a white triangular background.

That will make the meta 4 items in loot easy to spot, and make it clear to newbies that the mod they just picked up off a rat is in some way special and worthy of attention.  And again, it should be a very easy fix for a CCP UI effort.

What do you think?