I am occasionally asked to provide what my screen layout looks like for running logistics for incursions, and always forget to provide it.  Here it is: 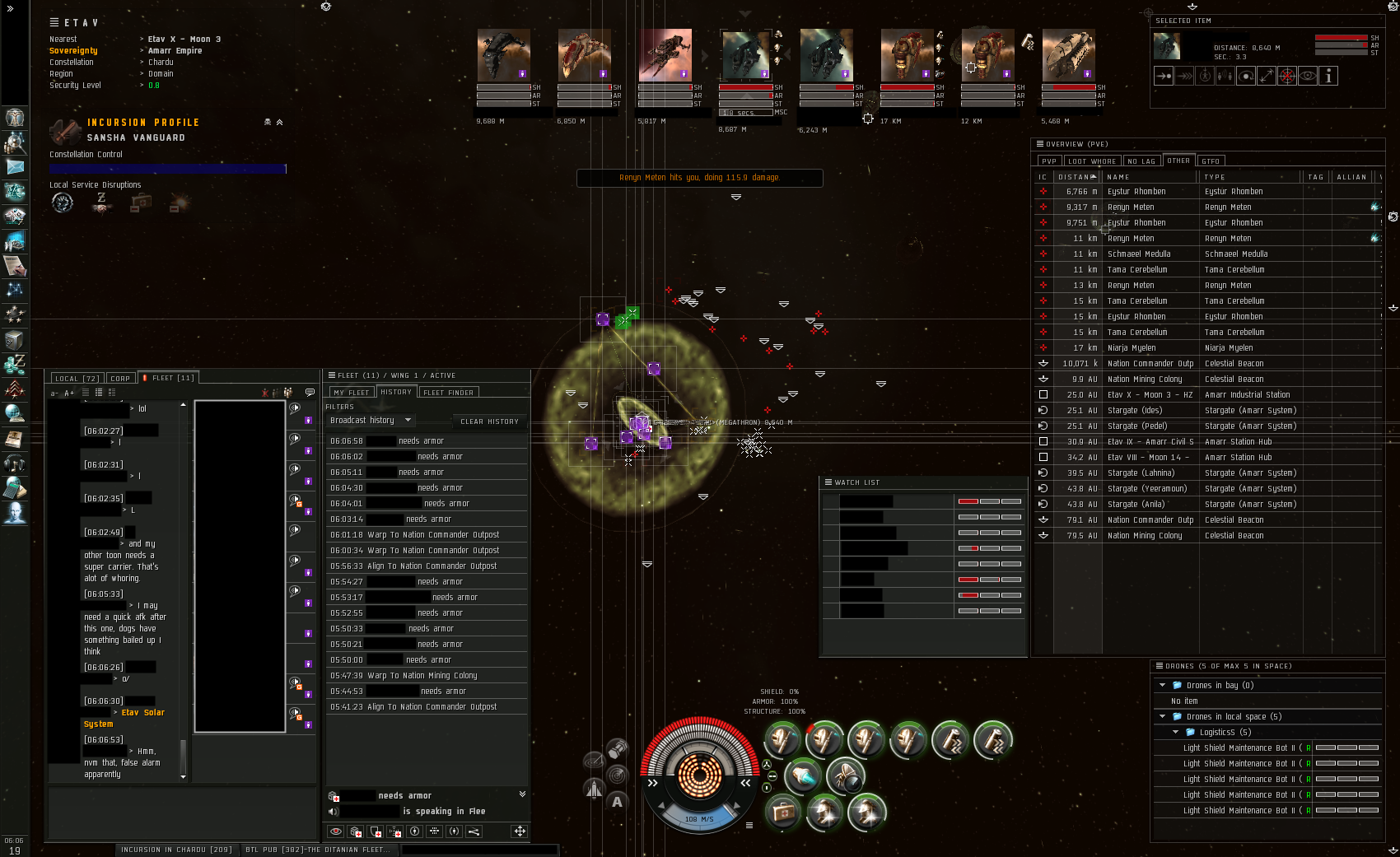 I can't think of anything I do particularly special for incursion logi versus any other type of logi in terms of screen layout.  Only the fit of the ship changes, and who's on the watch list.  ;-)  This particular screen shot is of an NCO a couple of months ago.  I've obscured the names of the pilots to protect them from gankers.  This was a 10-man Vanguard fleet, down one DPS at the time I took the screen shot.

The particularly sharp-eyed will notice that I'm using shield bots in what is clearly an armor fleet.  That's a quirk that I and other adept armor logis share.  The purpose to using shield bots in a VG fleet is to give the logis a visual indicator of who is under attack and who isn't.  Note the Abaddon on the far right.  That was our anchor for this particular fleet.  I used the shield bots to rep up his shields after he anchored.  Once you see a sliver of shields build up, you know you can pull the armor reps off him and move them on to someone else.  The red flash on the watch list provides a backup indicator.

I watch the fleet comms on the lower left, and even in VGs, I keep the broadcast history front and center.  Part of that is probably habit from flying PvP logi, a habit that is far more important to me than my incursion logi habit.  ;-)  I keep the rats visible on the Overview because I use that to determine if I'm the primary.  My high slots are sorted with energy transfers in between armor transfers, but once I undock, I always set the energy transfers to F5 and F6. You'll also notice that my reps are counter-cycled.  I'm a little anal about that.

When I fly armor logi, I generally prefer to fly the Onieros for VGs in "Abso Legion fleets": fleets made up entirely or almost entirely of Absolutions and Legions.  This particular fleet was running late in the USTZ night, where you don't always get the option of picking your exact desired fleet composition...

Anyway, for those that are interested, there you go.
Posted by Jester at 12:21 AM