It's been almost a week since Crucible dropped, and those who have any idea how the EVE economy works could predict how things would shake out with the T3 battle cruiser hulls.  Of course the prices would start out ridiculously high, and then fall like meteors.  But that's a tough and expensive market to make money in.

When the Goons made it clear that they were going to go with an Alpha Maelstrom fleet doctrine 18 months or so back, a somewhat unpredictable market effect occurred: it doubled and tripled the prices of 1400mm Howitzer Artillery guns.  And it affected not only the T2 guns, but the Meta 3 and 4 guns as well (and to a lesser extent, the Meta 2s as well).  In retrospect, it was entirely predictable: thousands of pilots would need between eight and 32 guns each.  Of course the prices were going to go a little nuts while the Goons and their allies bought and fit out the first few waves of ships.  But until it actually happened, I don't think anyone realized in advance what was going to happen.

So, your humble narrator, when he learned that each tier 3 battle cruiser was going to need eight large guns, decided to invest in large numbers of meta and T2 large guns of various types.  Let's see how that investment is playing out, shall we?

Let's start with the Tornado.  I guessed that most pilots would want 1400mm Howitzers and 800mm Repeating Artillery: 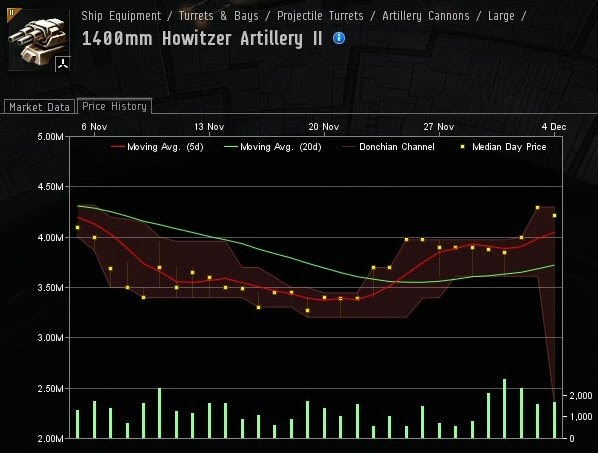 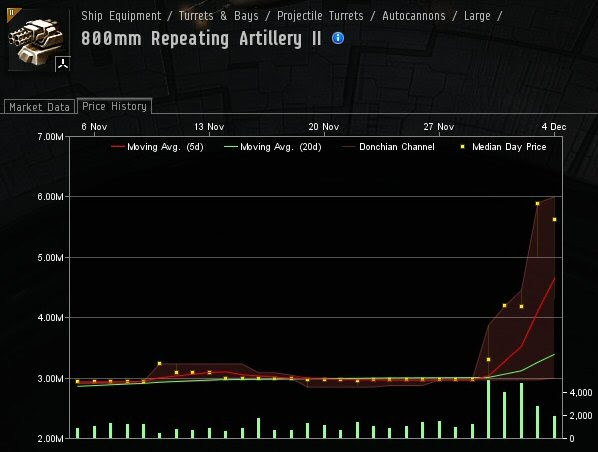 No to the first, big big yes to the second.  Kind of unsurprising, I guess.  I predicted to myself that a lot of Tornadoes would be used for alpha gank platforms and while I still think that'll happen, looks like it's happening with auto-cannons for now.  But I'm doubling my money on the 800s I bought, which makes me happy.  The curves for the Meta 3 and 4 guns track with their T2 counter-parts.  This caught me by surprise, though: 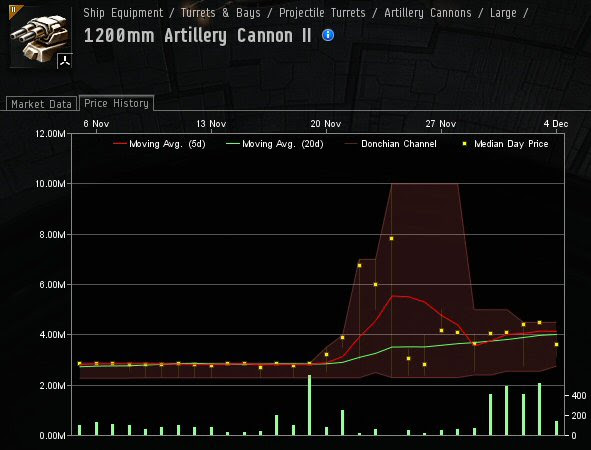 The more I looked at 1200 fits, the less they made sense to me. So I didn't buy any 1200s in advance of Crucible. But it seems there are enough people out there (maybe having fitting issues with the 1400s?) going this route to affect their prices.

Next up, the Oracle.  I invested big in Mega Pulse Lasers.  It was far and away my biggest buy. 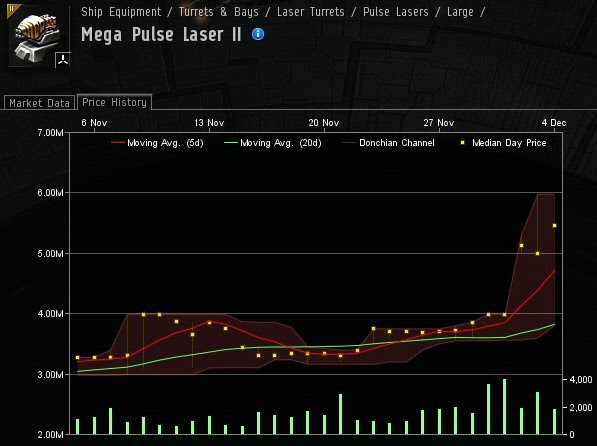 And it's an investment that's paying off handsomely, I'm happy to say.  Given how awesome Scorch crystals are, this one was pretty easy to predict.  As people figure out what a great platform the Oracle is with pulses fitted, I suspect these numbers are going to go up a bit more, so I'm only letting my stock of these out slowly for now.  I also thought Tachyon Beam Lasers would be very big on the Oracle, given that you can pretty easily hit things at 190km with them: 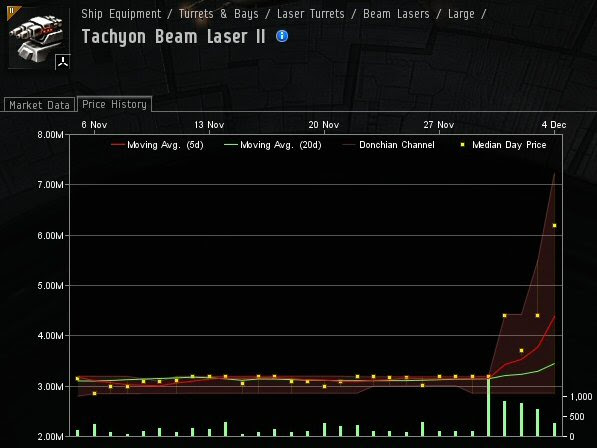 And again, I wasn't disappointed, though the track on this curve is a bit slower.  Ah well.  I didn't buy nearly as many TBLs as I did Mega Pulses.

Finally, for the Talos and Naga, my third biggest buy was Neutron Blasters: 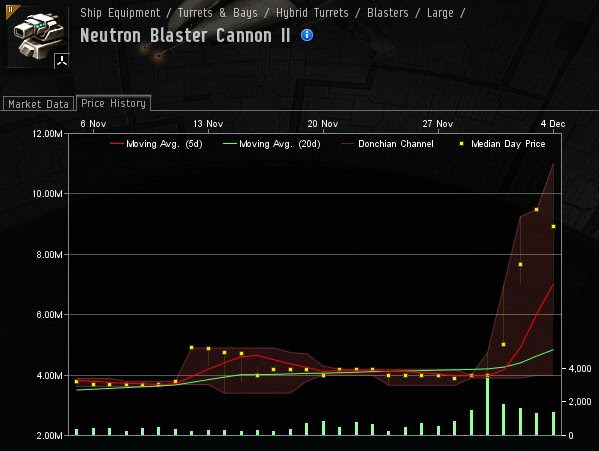 And that investment is turning out to be a loser, to my very great surprise, not because of prices (which have been great), but because of volumes, which are a bit lower than the others.  The Talos does absolutely horrifying damage up close with these guns, and while the Naga can't match Talos damage, it far outstrips the Gallente boat in blaster range.  And the +20% tracking on blasters is doing absolutely nifty things for blaster boats of all sizes.(1)  Still, the "blasters suck" meta is going to be tough for people to get over, I guess.  I can't decide if I should dump my stock and reinvest, or be patient and hold on to my stock for a while longer.

Which brings me to the biggest surprise among the tier 3 gun choices.  I didn't buy any 425mm Railguns. 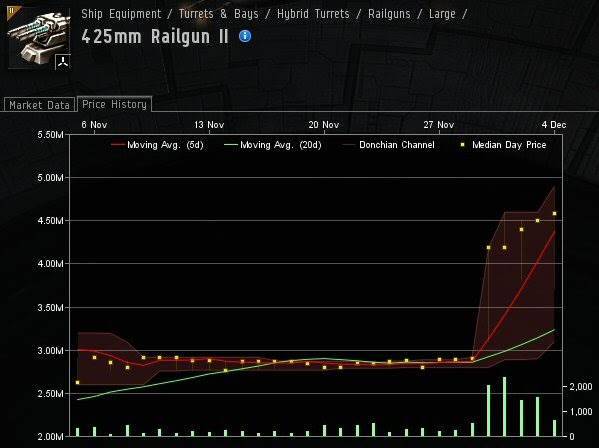 But I could have made some money had I done so.  So, watch out for sniping Nagas, I guess.  ;-)

Overall, I'm very happy with the investments that I made.  Despite not having a huge amount of experience with "market PvP", I'm getting better at predicting how EVE expansions will affect the market and then taking advantage of those predictions.  I didn't make an earth-shattering amount of money on my investments, but I easily made enough that I'll be spending some of the profits on a stable of tier 3s for myself.  ;-)

I also invested in large stocks of tech 1 gang-links, since I knew that people would need them to build the tech 2 versions.  And that investment is also paying off hugely, I'm happy to report.

Anybody else out there make some ISKies on Crucible?