Some games -- particularly RPGs -- have a mid-game problem.  Our example game for this exercise will be Skyrim.  Skyrim has a terrible mid-game problem.  Don't worry, EVE players.  I'm going to be relating this to EVE, so stay with me.

Skyrim is a skills-based RPG where level progression is determined based on advancement of those skills.  The game does not care which skills you advance.  Advancing a certain number of skills allows you to level up.  Leveling up grants increased stats and perks, but not increased skills.  But leveling up also increases game difficulty since the game levels your adversaries partially based on your own level.  Skyrim's mid-game problem comes about for two reasons:
Let's talk about both in turn.

Many of Skyrim's skills, notably the use of one- and two-handed weapons, using bows, blocking with shields, and Destruction magic, are 100% combat-oriented.  Advancement of these skills requires an opponent on which to use them and raising these skills increases their effectiveness.  However, many others, notably Smithing, Alchemy, Enchanting, and Illusion, Conjuration, and Alteration magic, are partially or wholly non-combat-related.  It is quite possible to greatly advance all of these skills, rapidly raising the character's level, without ever leaving the game's protected strong-holds.  At the point where such a character finally does leave one of these strong-holds, they can find themselves at level 5 or 6... but with combat skills of a level 1 character facing multiple level 5 and 6 adversaries.  Swift, frequent, and frustrating death is the result.

Almost as bad is the problem of enchantments and magic within the game.  Unlike Skyrim's predecessors, learning enchantments to use on magic items happens through the destruction of existing magic items either found or purchased by the player.  A similar mechanic exists for the purchase of magic spells for use in combat.  They must be either found as loot or purchased from vendors.  As a result, a great deal of luck enters early Skyrim play.  If you intend to frequently battle dragons, you will need magic items conferring fire or frost resistance.  Therefore, you must hope to either luck into receiving appropriate items as loot, or you must hope that the (randomly-generated) items up for sale by merchants will have these enchantments.  You then have to hope that if you end up purchasing items to destroy to learn their enchantments, that those items won't break your wallet.

This nearly immediately becomes difficult because magic items for purchase are rare until you reach the mid-game.  By the time you start to see them, the items you're forced into destroying to learn needed enchantments can be expensive.

This introduces several competing mid-game problems: do you spend your money on the spells and enchantments you need, or do you go off on many side-quests to try to luck into them, or perform those side-quests to gain the money you need to buy the items when they do become available?  And while you're doing so, how do you balance skills as you level?  If you forget and create a pile of potions or armor to sell and inadvertently level yourself with your non-combat skills faster than your combat skills in the process, you can find yourself facing a different sort of mid-game problem: the side-quests will become too difficult for you.

So, there's a very tricky balance involved in early Skyrim play to try to avoid these two mid-game problems.  You have to balance the advancement of combat and non-combat skills as you level.  If you're smart, you'll hoard much of your early gold, recognizing that it will be needed when you reach the mid-game, to fill in the inevitable holes in your enchanting ability or spell books left by unlucky loot drops.  This problem is not unique to Skyrim, of course.  As I said, many RPGs have this mid-game problem to one extent or another.  Most people who play RPGs for any length of time recognize the balance that has to be struck to be successful.

EVE Online also has a matched pair of mid-game problems.

A little over a year ago, strictly for my own amusement, I produced the following "chart": 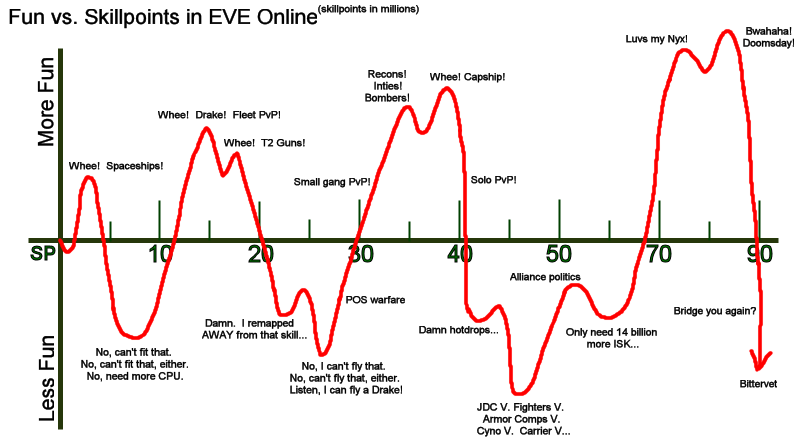 I posted it on FHC, and it got some laughs.  Some people wanted to nit-pick about where I had put this or that item, but I was mostly trying to convey the overall experience of EVE Online as a long-term player.  Whether you start PvPing in Drakes at five million SP or 12 million, whether you start solo PvPing at one million SP or 40 million, almost nobody can deny that one's enjoyment of EVE waxes and wanes with one's skill point totals...

And that causes frustration, impatience, and the strong desire to start playing a game where it doesn't take three years to get to the end-game goals.

That's one of EVE's mid-game problems.  We're told in the CSM December Summit minutes CCP has determined that "if a user has been subscribed to EVE for three years or more, that user is very unlikely to leave EVE."  Figuring one million SP every 21 days, that's about 50 million skill-points.  I have three characters past that point now, and for all three of them within their specialties, there's very few things they cannot do or fly were I to put my mind to it.

The quote came from a session with CCP regarding customer loyalty, and it's great that they recognize this problem.  And part of the problem is solved: at least we don't have to spend months training Learning skills any more.  But on today's modern EVE PvP battlefield, where pilots are expected to be able to field a wide variety of ships -- most of them T2 -- encouraging a new player to start that three-year climb is going to become increasingly difficult.  Goons -- Goons, mind -- in addition to fielding sizable battleship fleets are now fielding sizable super-capital fleets!  The days of the Goon Rifter fleet are long gone, except as a way to get a few laughs.  Lots of people will get to that dip in their fun at the seven or eight million SP mark ("no, can't fit that; no, can't fit that, either; no, can't fly that") and quit out of frustration right there.  Once you've trained all those fitting skills, you quickly forget how long they all took, but when you're doing it... oi.

How to fix it?  I haven't a clue.  Current players will be loath to change anything.  As I've said a lot, they'll say "I had to fight my way up the learning cliff, and it was hard.  You have to, too, newbie.  No short-cuts."  Maybe whatever loyalty program that eventually emerges from CCP will help.

I sure wish I had that updated PCU data.  It feels like EVE is out of immediate danger of crashing, but the niche that Incarna was supposed to break EVE out of still remains, and I don't think Crucible helped much.  Loyal EVE players might hustle over to mmorpg.com to vote it Player's Choice Game of the Year and that's terrific, but with both RIFT and TOR rocketing past EVE here, there's still some work to be done.  Remember, when mmorpg.com's editors chose, they didn't choose EVE.

What's EVE's other mid-game problem?  It's related, but I'll get to that in a day or two.
Posted by Jester at 4:50 PM