Plans for the weekend

If you don't follow incursion news in EVE, you might not be aware of this, but CSM alternate Darius III and the rest of BricK sQuAD. have made it their mission lately to close high-sec incursions as quickly as the mom spawns.  There's currently a 27-page threadnaught about it on the EVE Online forums... in the Crime and Punishment section, naturally.

Since my own connection to the incursion community is known, I haven't covered this to avoid the appearance of bias.  It's tempting, for instance, to rack this up as yet another veteran EVE player interdiction of new-player resources, except obviously with incursions it's nowhere near that simple since a lot of PvP vets like myself also participate in them.  It's equally tempting to rack this up as sour grapes on Darius's part, but it's not that simple either since Darius could hardly do this on his own.

So, I'm going to limit my coverage of the issue to this: whether you want to call this an interdiction or not, it's certainly been effective!  For the last couple of weeks, incursion bears have been very hard-pressed to find sites or build up any momentum.  As soon as they get settled into a new incursion, a fleet comes along and "prematurely" kills the mom, sending the "caravan of the heavens" on its way again.  There have been a few patches where an incursion has lasted a day or two past the "Mobilizing" phase, but not many!

And the issue seems to be coming to a head this weekend.

Twenty hours ago as I write this, there were three high-sec Incursions.  Right now, just as the weekend kicks off in Europe, there are zero.  Call this the picture of the week: 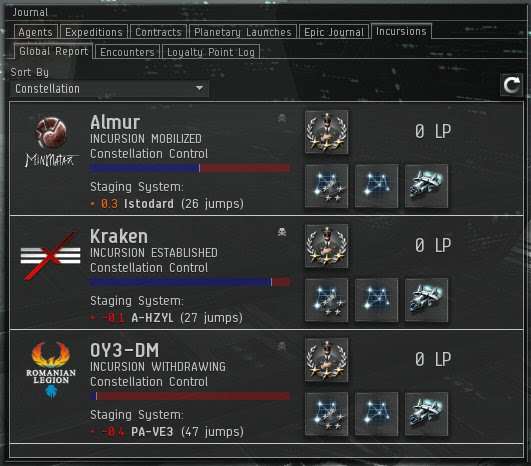 The rage in the public incursion channels is fairly epic.  I think it's just possible that someone might do something rash.

Oh, and I'll just leave this here (name deleted to protect the guilty):