Quote of the Week: Ownership

Quote of the week this week comes from Batolemaeus on Failheap, which sums up one of the big problems with EVE Online sovereignty:


The problem is that actually living in a certain part of space should result in sov. But that's not the case.  On tq, actually living in space you own is completely optional. You gain dominance by superblob, not by staying in the area.

The funny/sad thing about sov is that in npc 0.0, sov works better. The ones who defeat their opposition in day-to-day operations will own a station because they've driven everyone else away. It's simple and rewards active organizations making a difference over large ones, and since permanent presence matters, picking up the batphone is quite a bit harder.

Yep.  And I'd say that Batolemaeus didn't take this far enough.

I've now "lived" for significant amounts of time in high-sec, low-sec, sov 0.0, and NPC 0.0.  And the quote above really describes how "sovereignty" in EVE should work.  "Ownership" of space in Syndicate is a good demonstration of this.  I've lived in Syndicate three times in my EVE career, most recently now with Rote Kapelle.  Nobody holds sov in Syndicate.  But you can't live in Syndicate for more than a few days before you learn that certain systems are owned by certain alliances. 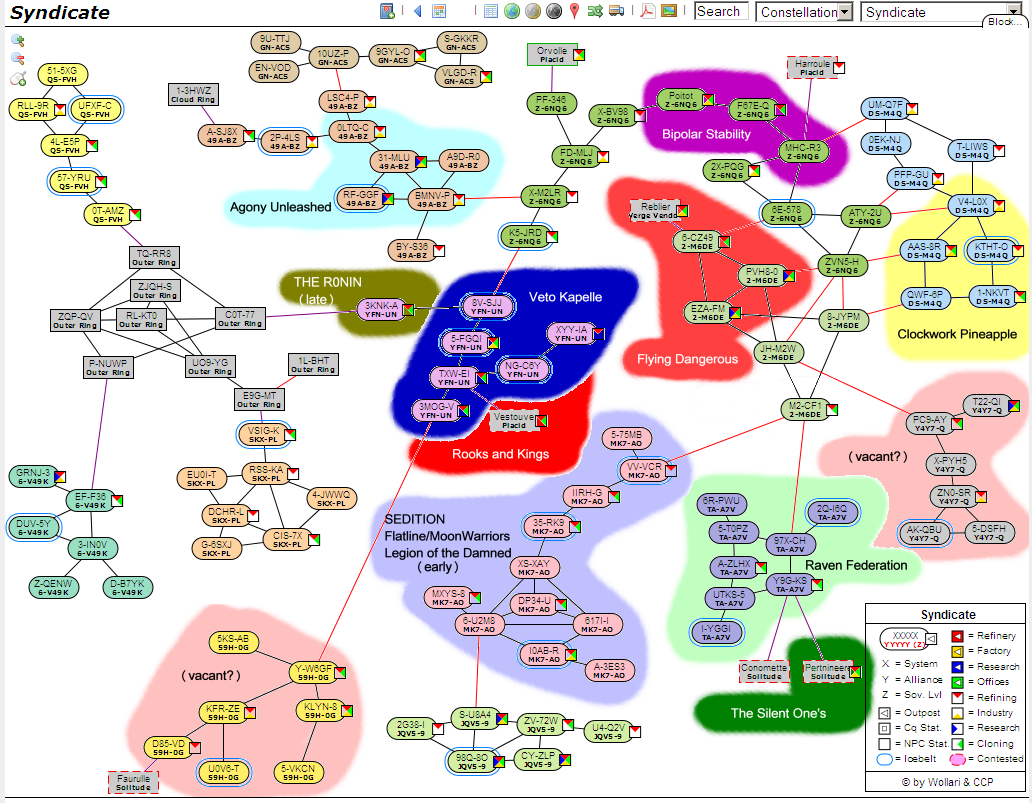 For my own use, I made up a little map of the people I've run into in my TZ over the last four months or so and the areas where they tend to congregate.  It even looks sorta like a little sov map.  And the people that "hold" those constellations hold them far more forcefully than any sov-holding alliance I've been associated with, with the possible exception of Goons.(1)  Anyone who tries to move into Vestouve is going to find out really fast what a dim view Rooks and Kings holds of that idea, and God help you if you try to move into TXW with Rote.  ;-)  And this applied just as much -- maybe even moreso -- when I was in low-sec faction warfare.  There were definitely "home systems" for the corps involved in that.

These days, the only thing preventing people from moving into half of null is the fact that the owning corps and alliances can prevent it through the station ownership mechanic.  But those stations are so routinely cheap for purchase now that many of them -- maybe even most of them -- are devoid of life.  And in a lot of regions, far more people live in the NPC 0.0 stations in those regions than the owned ones.

I feel more and more that CCP should take a hard look at Perpetuum Online's "tug of war" sovereignty mechanic and adapt it for EVE.


(1) The Goons are really the only group that has the numbers to really populate the space they hold.
Posted by Jester at 5:57 PM