Bicyclist on the roadside

The following post has absolutely nothing to do with EVE.  Nothing at all. 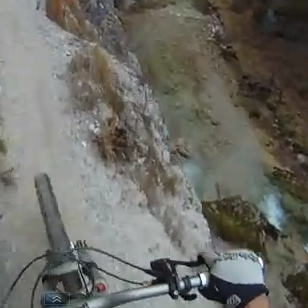 Hypothetical situation: driving uphill on a lonely two-lane mountain road, you come upon a bicyclist going in your direction at the edge of the road.  Just off the edge of the road is a steep embankment, then a cliff.  The bicyclist is struggling to climb this mountain road.  Maybe he's just getting some exercise or perhaps training for a competitive event... or perhaps that bicycle is how he gets around.  The next closest human is miles away.  It would only take the very slightest nudge of your steering wheel to send the bicyclist careening off the edge of the road, down the embankment to serious injury and probably death.  What do you do?

Chances are pretty good you recoiled a bit at my last two sentences, because you'd already started to picture yourself going wide into the other lane to give the bicyclist plenty of room as you passed, hadn't you?

What if the bicyclist were your worst enemy?  What if you were assured that you'd never be caught?  Same answer?  Yeah, probably.  It might be fun in the latter case to picture yourself sending the bicyclist enemy to almost certain doom, but you wouldn't actually do it.  In the 21st century, we're all moral people to whom murder is anathema.

But the first laws against murder actually started out as purely practical things, about 4500 years ago.  Morality had nothing to do with it.  Human civilization at the time had advanced beyond the point where someone would murder you for the goat leg you had just cooked, but not by much.  No, in a time when savagery, rape, slavery, and early death were commonplace, morality was the last thing on the mind of humankind.  The first laws against murder were instituted by the very early religions.  When humans commit murder, they tend to kill people they know: acquaintences, associates, friends, family.  This was as true then as it is now.  Those people tended to be of the same religion as the murderer, and the murder resulted in the net loss of worshippers.  Worshippers represented power and money, so the earliest religions frowned on that sort of thing.  Kings and states soon saw the practical value of this -- a citizen represented work, taxes or tribute, and a potential soldier for the army -- so they instituted laws against murder as well.

Murdering someone of a different religion, or from a different kingdom or state was perfectly all right.  As a matter of fact, until pretty recently, priests would tell you that God not only condoned such murders, He celebrated them.

Hush.  This has nothing to do with EVE.

Because the answer to my hypothetical situation in EVE is that you'd murder that bicyclist on the spot, wouldn't you?  If EVE had bicycles and cars, roadsides and cliffs, that'd be one dead bicyclist.  You'd probably do it, and then stop your car, get out, and shout "LOL noob bicycles sux0rs pwned u pubbie!" down the embankment at him.  And in the process, you might find yourself murdering a member of our own religion, our own state, because not all of those hypothetical bicyclists who can't afford or don't have the skills for a car come back to EVE after being murdered, do they?

It's got me really wondering about the people who rage-quit EVE when this sort of thing happens.

The past few days, I've been cheerfully engaging in a little bit of EVE "class warfare", only the "upper class" this time is people who've been playing EVE for five or more years.  These people, quite naturally, know way more about EVE than I ever ever will, even if I play EVE for 15 years.  Just ask them.

Because even if I play EVE for 15 years, they'll have been playing for 20.

In an MMO that wasn't such a niche product, this wouldn't be a big deal.  I'll bet there are more EVE players with e-fame than there are WoW players with e-fame, just because the niche is smaller and more crowded, on a single shard, where everyone runs into everyone else sooner or later.  Sooner or later, you're gonna get yourself punched in the mouth, or told that you're never going to be as good at this game or know as much about this game as someone who's been playing for two more years.  Don't like it?  HTFU or GTFO.  "EVE isn't a game for wusses" as the CSM so succinctly put it in the December Summit minutes.

Now, of course, if EVE players could murder WoW players instead, we'd do that instead in a second.  That's why lots and lots of people are getting so excited about even the potential of raining fire down on DUST 514 players from orbit.  God doesn't condemn such murders, he celebrates them!  Because that isn't our religion and it isn't our state.

Don't get me wrong!  I'm not advocating the end of ritual murder of younger EVE players by eight-year-old EVE players.(1)  Far, far from it.  Morality?  In my EVE?  No way.  But it's sure got me wondering how many of EVE's problems as a niche market MMO are created by its own players, particularly its older players.

I have outside reasons for being on this kick lately, by the way.  More about that tomorrow, including a long bit of reading material for all of you.  I'll try to post it early so you can go back and forth to it during your respective work days.  ;-)