Step on it while the lights are on

As I understand the story, here's what happened (but if you know more details, please feel free to fill them in in comments).

A pair of The Bastards., a well-known smaller piracy alliance were out haunting low-sec for targets when on directional, they spotted a Cockroach.  A CCP employee was similarly spotted in Local.  What's a Cockroach?  You can see the smaller picture in the kill-mail.  Here's a bigger one: 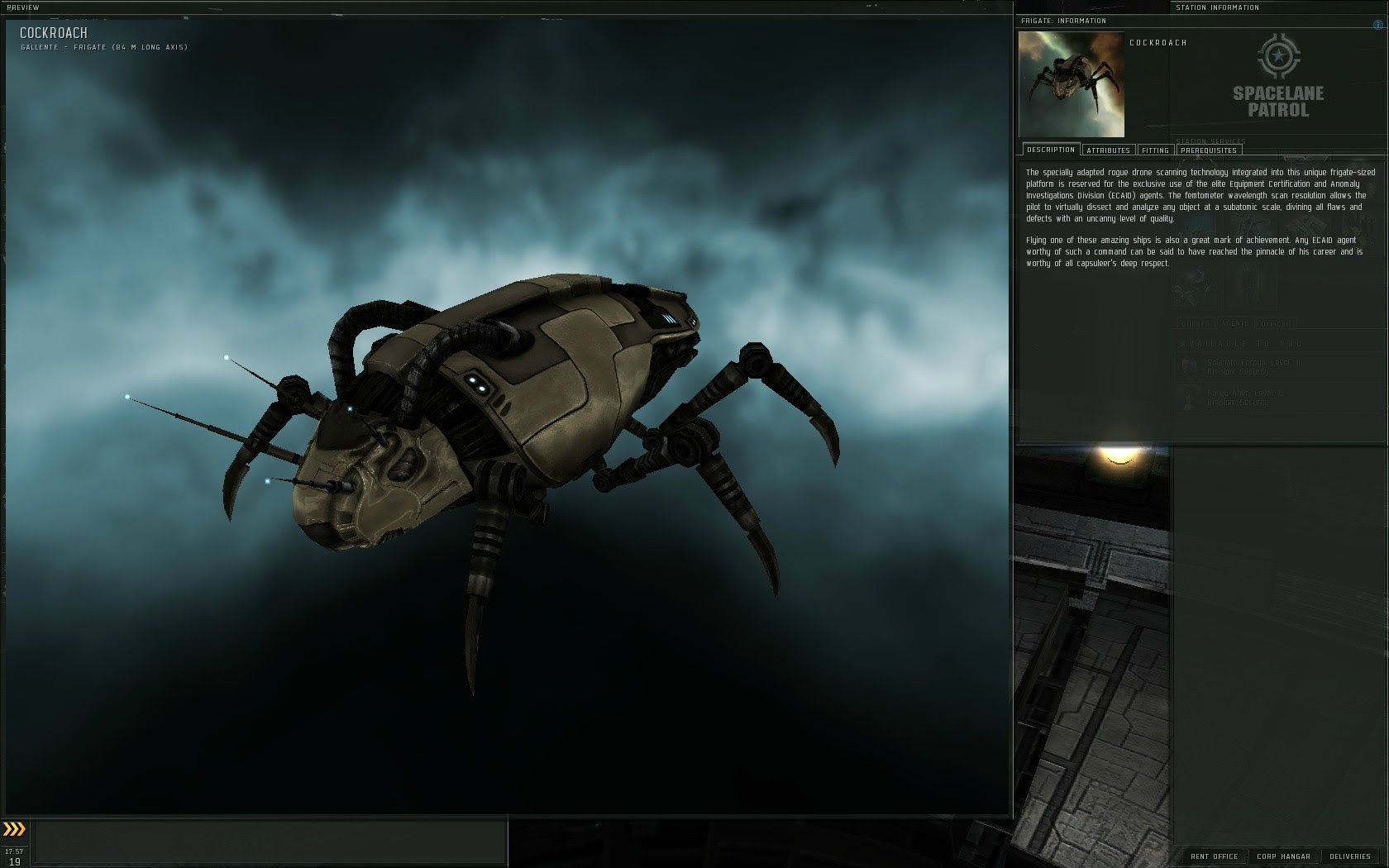 Word around the campfire is that CCP is looking for additional help with bug-hunting and are going to solve the problem in the time-honored EVE tradition of throwing money at it.  Or at least throwing ships at it.  That's right: rumor is that if you meet certain conditions on the bug-hunter team, you get one of these for your very own.  Here's the database entry that's been spotted for this vessel.  Short version: it's basically a hopped-up Gallente Incursus with a fun look and a cruiser-strength shield tank, but extremely thin resists.  So, a hangar queen, but a hangar queen with potential for getting some fun kill-mails.  Assuming they give it its gun turrets back.  Right now, it has none.

In the meantime, though, one of the GMs seems to have temporarily given the ship a huge cargo bay and a huge drone bay.  One supposes the model and art are being tested right now, and the extra cargo space is useful for moving lots of Cockroaches around.

Back to The Bastards., who upon spotting this unique ship, decide the logical thing to do is scan it down, which they do successfully.  Combat ships are dispatched, a scram is applied.  Then, if the story is to be believed, they followed low-sec piracy tradition and tried to ransom the CCP pilot!  Sadly, the dev in question seems to have been AFK, so the two pilots took the next logical step: pew the ship, followed by pew the pod.  +2 kill-mails.

Examination of the Cockroach wreck cargo then reveals an Enigma!

For those not aware, the Enigma is a Jove frigate that you can occasionally see CCP devs flying around Tranquility.  Don't expect to see a kill-mail for one of those any time soon, though, because they're invariably fitted with all sorts of unique GM mods that make the ships nigh-unkillable.

This one was packaged and ready for pick-up, which the pilots in due course apparently did.  Sadly, they could not fly the ship, as sitting in an Enigma requires the Jove Frigate skill... the skillbook for which does not (to my knowledge) exist on TQ.  The fun of potentially selling this gloriously priceless trophy to a collector was similarly short-lived.  The pilots involved were contacted by a GM, congratulated on their kill, and then found the Enigma was despawned and replaced with a pair of PLEXes.

Hee.  Not a bad day's work!  So moral of the story, if catch a Cockroach while the lights are on, step on it.
Posted by Jester at 7:09 PM