I was looking over the new missile launcher turret models and admiring how nicely consistent they are, both internally and externally, when it reminded me how ridiculous I feel some of the gun turret models are.

Now, don't get me wrong, I think the art team -- overall -- did some great work on the gun turret models when they were introduced last year.  They look nice, the animations are a treat, and they show off how far ahead EVE is when compared to competitors, particularly Star Trek Online.  I might also bitch about turret placement on some of the ships (particularly the Ferox), but the turrets remain one of EVE's graphical strengths.  They really help make EVE ships look more dynamic and consistent.

I fly a lot of Minmatar ships, and one of the things that really impresses me about the Minmatar turret models is their internal consistency.  You can tell that the same person worked on all of the models, or at least the same couple of people, and they talked to each other, showed each other their work, and collaborated.  Take the 425mm AutoCannons.  On the left is the single 425mm AC used by cruisers and battle cruisers.  On the right, the dual 425mm AC used by battleships. 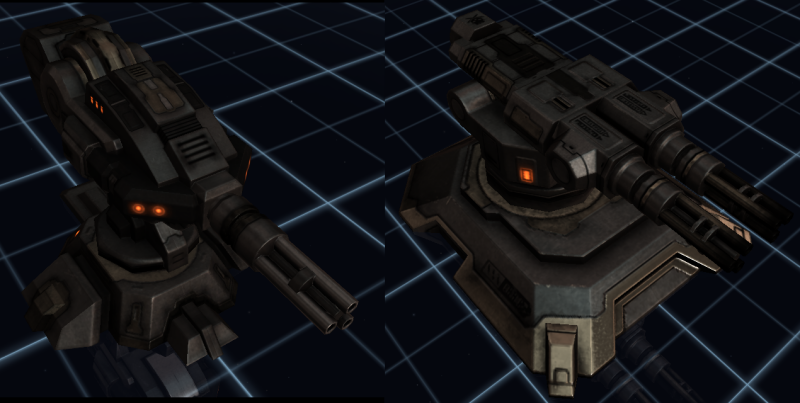 There's no question about the family relationship.  The two guns could have come out of the same factory.

Even Minmatar guns that could otherwise safely claim to be completely unrelated share design cues.  On the left, the cruiser-sized 650mm Artillery Cannon.  On the right, the battleship sized 650mm Repeating Artillery (which is actually an AutoCannon):

Again, nice clean lines, nice symmetry, and nice internal consistency between the two, even though one is a long-range weapon and one is a shorter-ranged one.  You can tell that either the same person worked on them, or the team that worked on them talked.  That's not to say all the Minmatar weapons are perfect in this regard, of course.  The 1200mm Artillery and 1400mm Artillery cannons look nothing like each other, nor do the 125mm and 150mm AutoCannons, two things I always find amusing.  But overall, the Minmatar guns are great in this regard: really good internal consistency.

Compare and contrast to the railguns. 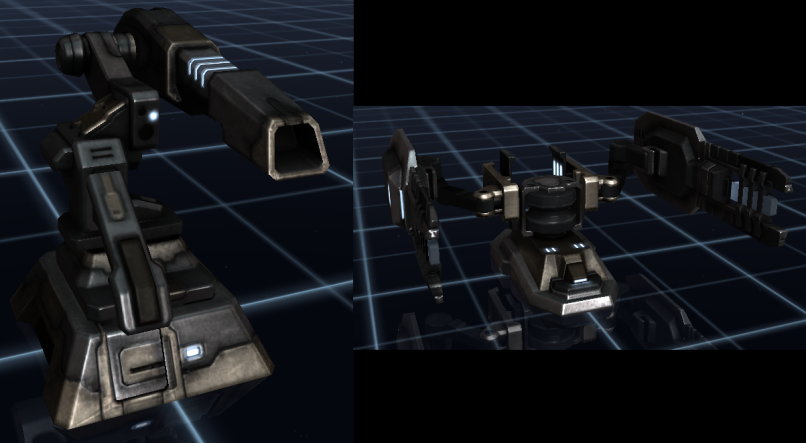 You would be forgiven for thinking these two weapons, ostensibly directly related, were in different games, much less on different size ships.  They look absolutely nothing like each other and share no design cues whatsoever.  It would have been the easiest thing in the world for the guy working on the frigate model to just copy-paste one of the two cruiser gun models, downsize it a bit, and fit it on his emplacement.  Not only did he not do that, he didn't even wander over to look at the sketches given to the guy working the cruiser model.

The gun the next size up isn't much better.  On the left, the cruiser-sized 250mm Railgun.  On the right, the battleship-sized Dual 250mm Railgun:

Not only do they look almost nothing alike, they don't even share design cues with their smaller cousins.  You see this right across the railgun line.  At least three people were involved in the art, and none of the three of them even close to talked.  Look at the 125mm Railgun, the 250mm Railgun, and the 150mm Railgun.  Three totally different design aesthetics at work with few or no commonalities between them.  The people that worked on the blasters did a much better job, nearly as good as the work done on the Minmatar guns; the only thing I'd change about the blasters is to make them more visually interesting.  They're kind of dull. 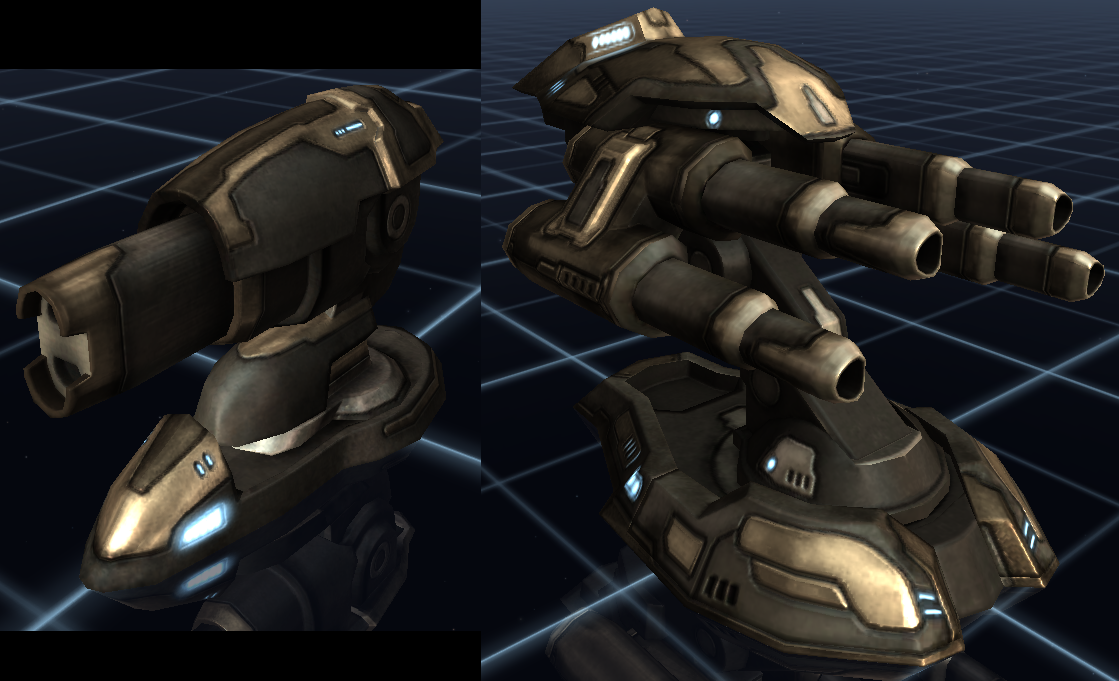 Again, other than the color scheme, you would be forgiven for thinking that these are two completely different weapons.  First, I realize that there is some question about whether lasers will produce recoil.  And honestly, I don't care how the artists decide on this question.  But please, decide that question first for all of your lasers, one way or the other.  ;-)  Because it seems clear that again, at least three people were involved in the laser design and the three of them all had different ideas on this question.

In particular, one of the artists really wished he had been working on the Minmatar guns and so produced Minmatar lasers instead.  ;-)  His work was good enough to be showcased in the Incarna log-in art, so good on him there, but if that was going to be how lasers were going to look and work, I wish the decision had been consistent.  Instead, we've got some guns that keep their workings internal while others have these ridiculous-looking siege gun style barrels.

The cruiser-sized weapon says "laser" to me.  The battleship weapon says "World War I" to me.  ;-)  At least the same person that worked on the one battleship-sized pulse laser worked on the other (the Mega Pulse) as well.  Still, it would have been nice had this person talked to the two people that were working on the cruiser-sized weapons.  And we know it was two different people because all we have to do to confirm that is compare the Heavy Pulse Laser to the Focused Medium Pulse Laser (which itself looks almost nothing like the frigate-class Medium Pulse Laser).

But the internal consistency of the pulse lasers is fantastic compared to the beam lasers.  Oi.  On the left, the cruiser-sized Heavy Beam Laser.  On the right, the battleship-sized Dual Heavy Beam Laser: 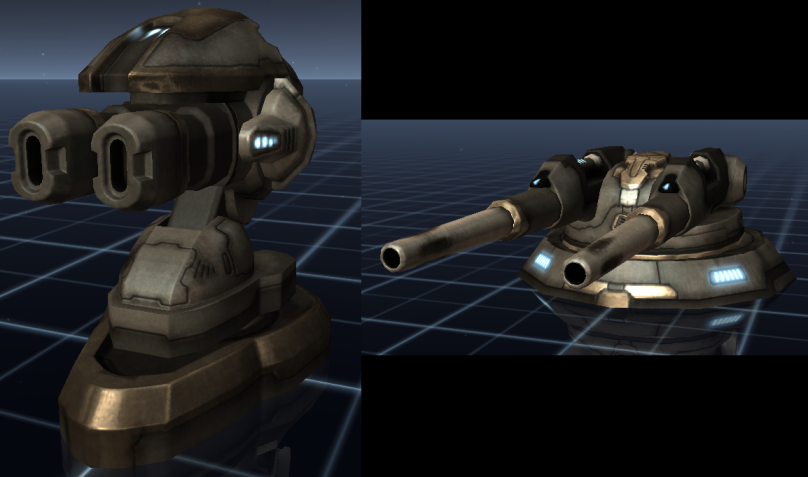 Do I even have to talk about this one?  I guess I don't.  The barrels on the latter spin.  They spin.  And the battleship-sized beam lasers only become more grotesque and ridiculous as they get bigger.  ;-)

Anyway, it's a great argument for getting your people to talk to each other from time to time.  If you ever need proof that CCP sometimes has a communication problem, you have visual proof right in the game.  That's why it was really nice to see how internally consistent and well-done the missile turrets are.  I really look forward to seeing more finished versions, presumably at Fanfest.
Posted by Jester at 8:17 AM