Like a tackler approaching a dangerous target, I'm going to spiral in on a topic.  Maybe I'll catch it, maybe it'll warp off.  Let's see.

Iteration (n), definition 2: a problem-solving or computational method in which a succession of approximations, each building on the one preceding, is used to achieve a desired degree of accuracy.

Take a small handful of pennies: a dozen or so will do to start.  Toss them on a large flat surface, like your dining room table.  Spread them out a bit, but not too far.  A dozen pennies in a square about a third of a meter on a side is good.  Now take a single dime and put it in the middle of the formation of pennies.  Now then, your job is to move the dime outside of the square that includes all the pennies.  But you have to move the dime so that at no point is it moving directly toward or directly away from any of the pennies.  Try it.  See if you can do it.

You've now just simulated the difficulty of a dictor pilot trying to tackle a group of Titans.  Even if you somehow survive to get in among the Titans (let's say you've got a warp in), chances are you're not getting back out.  One of those Titans is going to blap you.  They are carefully watching your radial velocity on their Overview and when that number drops below their gun tracking (which I assure you they have memorized), F1... boom.  You're dead.

This harkens back to what I posted the other day about guns having a 100% chance to hit a target if tracking is taken out of the equation, and the fact that they'll do at least 50% of base damage.  Base volley damage on an Avatar is 13,000+ HP... better than a alpha-fit Maelstrom.

Remember, the to-hit calculations are all chance-based.  "Titans are getting their tracking cut in half," you remind me, and yes, that's true.  When I play table-top war-games, I like to specialize in a skill that I think of as "double tap".  The best "to hit bonus" in the world is not as good as taking two dice rolls instead of one to hit the target.  I'd rather have two dice rolls than one high-bonus dice roll.  And Titans have six dice rolls, not two.  And twelve Titans have 72 dice rolls.  Even if you cut their "to hit" chance in half, someone's going to get lucky.

Next, remember what I said about proliferation.  Titans are becoming so common-place in the alliances that rely on them that we've got people dual-boxing Titans.  They're spreading like mad.  The problem with Titans isn't the one Titan you have tackled, it's the fact that this is going to come and try to rescue the Titan you have tackled: 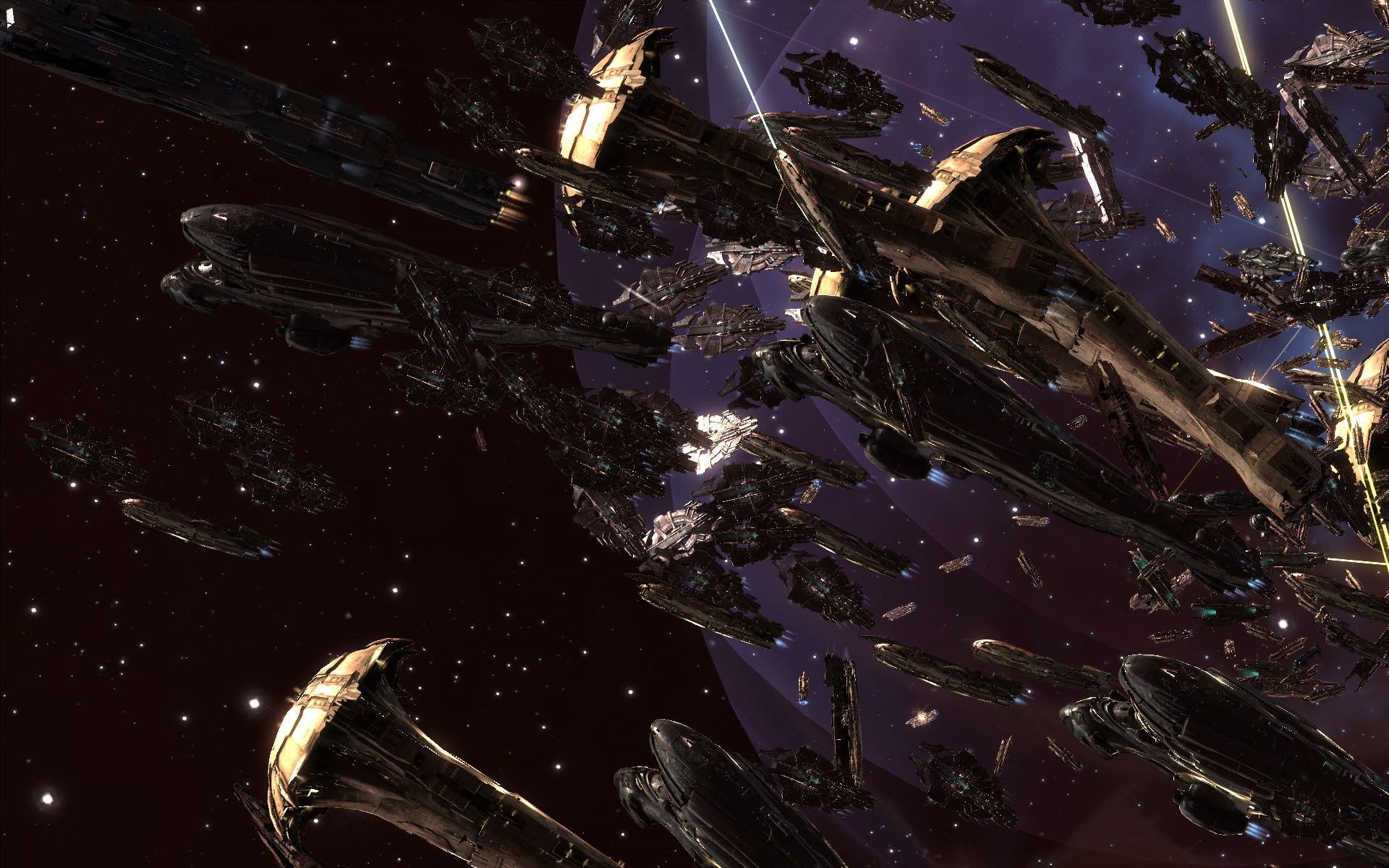 CCP had to do something to combat this, and the solution they chose was to greatly reduce the scan resolution of Titans, to a 5mm base.  You can simulate this yourself in EFT if you like using a Phoenix dreadnought, a Tech 2 Siege Module, and two 'Halcyon' Warp Core Stabilizers.  If you do not assign a pilot, you'll find this "Titan lock-time simulator" has a 5mm scan res, just like Titans will have soon(tm).  Now fit a pair of officer sensor boosters with scan res scripts to our simulator, and put in a Quafe Zero.  You'll find that scan res increases to between 15 and 16mm.  That's sufficient to lock a carrier in 30 seconds, or a super carrier or Titan in 20-25 seconds.

Seleene describes this as a "troll" by CCP.  I describe it as "my Revelation", which locks targets of this size only a few seconds faster.

Is this the scan res nerf the perfect solution?  Maybe.  Maybe not.  Seleene, champion of iterations, describes it as "kicking the can down the road."  I describe it as an "iteration", but what do I know.  Perhaps when the Dominion sov system was being put into EVE, it shouldn't have been pushed out to Tranquility until every designed sov enhancement associated with it, such as treaties, were implemented all at the same time.  If the fact that "short term fixes have a nasty habit of turning into long term fixes", all I can say is you knew this when you put down your 60 or 70 billion for your "big toy".

Iteration, by definition, includes making changes, checking to see if they do anything approaching what was expected, and making changes again until you like the results.  You don't get to be the champion of only the iterations that you personally like.

But in my opinion, the high money tears aren't even about that, not really.  The simple fact is that Titans will now have to wait 100 seconds to lock up a dictor, or 80 seconds to lock up a hictor.  Therefore, they're going to have to rely on strong sub-cap support in order to attack those ships, and can't just blap them themselves.  They soon won't be able to just jump their super cap fleet into a fleet of sub-caps with impunity any more.  And this appears to terrify every Titan pilot in the game.

I find myself unsympathetic to say the least.

I'll have more to say about the cost side of the equation later in the week.  That deserves its own post.  But here's a hint: "expensive" and "invulnerable" have different definitions in the dictionary, I assure you.
Posted by Jester at 12:41 PM