Notice: The following post, and all of its supporting data, were written and generated without assistance of any kind from any current or former CCP employees or management.

Last summer, I made a bit of a name for myself with a pair of posts that looked at data focusing on how many people are logged into EVE Online at any given time.  I called the posts "Not all curves are pretty" and "Some curves aren't".  And aside from my various player guides, the second post is the most-read thing I've ever written on this blog.  The two posts were statistical analyses of EVE's logged-in player counts over a period of about five years.  I looked at EVE log-in data primarily because that's the data that's most interesting to me.  While other MMOs concentrate on subscription numbers, EVE's "content" is really primarily the players.  The more people playing EVE, the better the game is and the richer the experience is.

It's my understanding that "Curves" created quite a stir within CCP.  Certainly, it probably represented the first example of an EVE player taking CCP business data, normalizing and collating it using modern techniques, and producing an analysis freely available to the player base.  The data for the first post was provided from publicly-available PCU data.  The data for the second post was provided to me by a pair of anonymous sources; since their data matched both each other and the previously publicly available data, I ran with it.

The center-piece of the second "Curves" post was this chart: 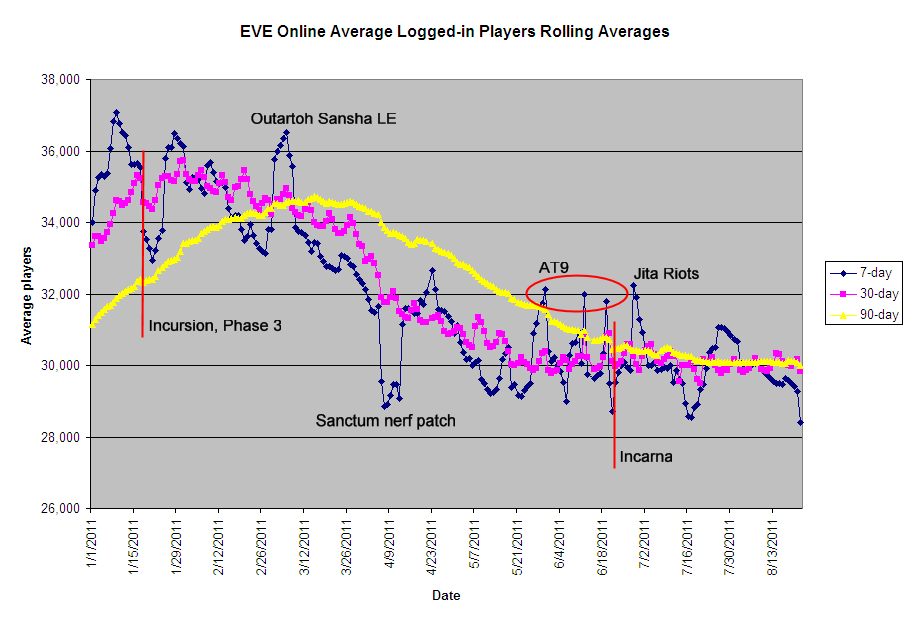 It showed a massive decrease in logged-in players following the release of Incursion and a completely stagnant log-in curve after the release of Incarna.  As a result, it provided both players and CSM6 with a lot of political capital to show CCP conclusive proof that from a business stand-point, Incarna was not succeeding in its stated goals.

CCP was apparently surprised and unhappy to be dictated to in this manner.  At the end of "Curves", I promised that as long as I was provided relevant data, I would keep the players abreast of any changes in these numbers.  But I also made it clear that I was dependent on the data.  I guess I shouldn't have been surprised when the data flow dried up.  The public data source I'd used for the first post itself went off-line, and I didn't hear from my two sources again.  Between this and Fearless, CCP became rather manic about plugging "leaks" of information.  Whether this mania contributed to the death of the QENs around the same time, I can't say.

And for months, the data that I needed to generate an update for "Curves" was unavailable to me.  It left me with a bit of a problem: if I wanted to continue tracking this curve, how could I do it?

I'm happy to report that I've found a way.  This time, I'm keeping the "how" to myself to hopefully prevent my data being shut off.  But you can rest assured that the data source is publicly available, and I now have the capability to independently pull that data and generate analyses of EVE logged-in player counts whenever I care to.  The core of my ability to do this is a pair of self-written computer programs that I collectively call "Snapcount", after an American football term.  A week ago, every element of Snapcount ran successfully for the first time, producing its first report.  I linked the new data to my previous data, and here we are.

Now that I have a good source for this data, I'm keen to do some other analyses as well.  For instance, I have a hunch that the so-called "summer slump" is a myth and I'll be interested to see if the data bears this hunch out.  Watch this space.

In the meantime, this post represents the long-promised update to "Curves".  Let's start with the full-year 2011 chart, the update to the chart above: 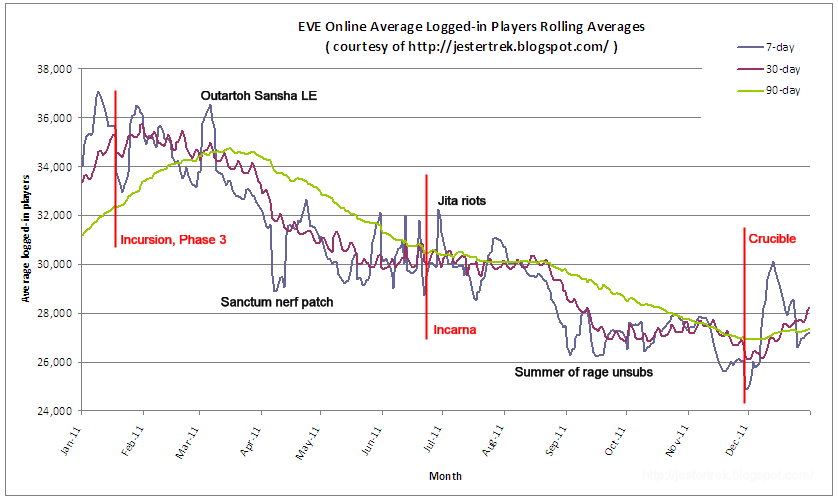 As you can see, after the end of the previous chart -- the data for which ended on 22 August -- things did not improve in terms of numbers of players logged into the game.  21 August was a Sunday, traditionally the busiest day in the EVE week, and represented a good number of players logged into the game.  28 August saw this number drop by about 5%.  It continued dropping all through the remainder of the summer into autumn.  By mid-October, the decline was almost 10% total.  This almost certainly represents player unsubs.  The 30-day delay after the Jita riots of mid-July reflects that a large portion of these unsubs were likely players using GTCs or PLEXes to fund their play.

By October, the green 90-day rolling average line is essentially in free-fall, finally leveling off in a new normal of about 27,500 players logged in average, per day.

In the first post last July, I included a chart that displayed the relative success of each EVE expansion based on the number of players +30 days after the expansion was released, +60 days after the expansion was released, and a week prior to the release of the next expansion, a date I called "+Next".  I can now fill this table in and include the Incarna numbers.  Those numbers are remarkably grim:

The record is clear: in terms of attracting new players and retaining old ones to play the game, Incarna ranks as the least successful expansion in modern EVE history.

So much for bad news.  Let's turn to the good, and it starts with the new line at the end of that table.  As you can see, in its first 60 days of release, Crucible has gone a long way toward repairing the damage!  So far, it ranks with Dominion and Apocrypha as a solid success.  Here's the updated chart showing average logged-in players for the last six months: 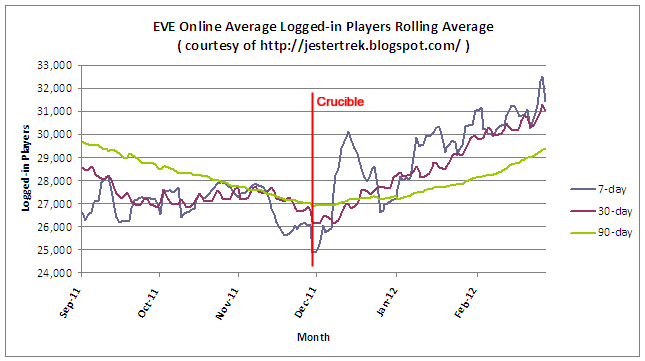 This time, concentrate on the maroon 30-day rolling average line.  After free-falling to its new normal of around 27,500 players logged in per day, Crucible was released on 29 November 2011.  And as you can see, the improvement was almost immediate!  After a dip caused by expansion-related downtime, things are heading back upward right up to the present day.

26 February was a Sunday, the last Sunday shown on this chart.  And if Snapcount is to be believed, 26 February was the most successful Sunday EVE Online has had since early June 2011, eight months ago.  Out of the woods yet?  Nope, not hardly.  The Incursion expansion set new records for numbers of logged-in players.  With the bleeding stopped, the current counts have recovered from the 10.7% dip inflicted by Incarna.  Things are back to where they were just prior to the release of that expansion.  Prior to Incarna, looked at in the long term, EVE's logged-in player 90-day rolling average was stagnated at 30,000.  Right now, we're just below that.

But there's certainly cause for hope!

And thanks to Snapcount, I'll be able to keep you updated on it into 2012 and hopefully beyond.
Posted by Jester at 2:33 PM