So, the CSM7 results are in.  Congratulations to the winners!  How did I do with my predictions?

All in all, pretty well!  I correctly predicted 12 out of the winning 14 CSM7 members.  I didn't predict Issler Dainze in my 14, nor did I predict Darius III.  My predictions were riverini (who came in 16th) and Prometheus Exenthal (who came in 20th).  I predicted five of the top seven CSM7 members would be bloc candidates; in actuality, four are in the top seven are (I do include Seleene in that category this year).

Things I got right: The Mittani would be Chair.  Duh, easy.  Two Step, Greene Lee, and Seleene would join him.  Alekseyev Karrde's good campaign would allow him to sneak in as an alternate.  Meissa Anunthiel would be an alternate.  Kelduum Revaan's position would be a little unpredictable.

Things I got really, really right: I predicted the vote tally would come in around 61,000 total votes.  The actual total was 59,109, so I was within 3%.  I said that about 41,000 of those votes would be cast for winning candidates.  Actual total for winning candidates: 44,296.  A bit of the difference here can be racked up to Mittens's voters gaming the system; I'll have more to say about that in a second.  I also said that it would take 2675 votes to get a top seven seat this year.  That, I got exactly right: every candidate with more than that got a top seven seat; every candidate with fewer didn't.

Things I got wrong: I predicted Hans Jagerblitzen would make a very strong showing.  Didn't happen.  The FW corps did not vote their best interests this year, and they're going to pay for it at the May Summit.  Likewise, I predicted Dovinian would get a top seven seat.  The fact that he didn't can only be regarded as a massive failure on TEST's part.  I don't know where they screwed up, but they've clearly got some work to do if they want to be represented in the top seven next year.  It sends the message that Mittens carried White Tree last year.

I predicted Elise Randolph would be in the bottom seven, but Mittens himself set me straight on this one: Elise ran as a NC Reloaded sponsored candidate, and that worked just fine for him.  I didn't realize he'd have such strong bloc representation behind him.  And I predicted that Mittens would fall short of his 10,000 vote goal, which obviously didn't happen.

Overall though, I'm very happy with my predictions!  I did much better this year than I did last year.

There were two big surprises for me this year.  First one was Darius III making a CSM7 seat over riverini and Korvin.  This has a very amusing parallel for me compared to last year.  Darius III bragged on FHC that he had used scamming EVE players to beat better candidates.  He did it again this year.  Will CSM7 even let him get involved?  At all?  Smart money says "no": he'll continue to be frozen out of the process.  Given that there are six alternates ahead of him this time instead of four, the likelihood that he'll be able to parley the alternate slot into another trip to Iceland is also roughly zero.  So, if you voted for Darius, that was a true wasted vote.  Shame on you.

Second biggest surprise for me was this graphic: 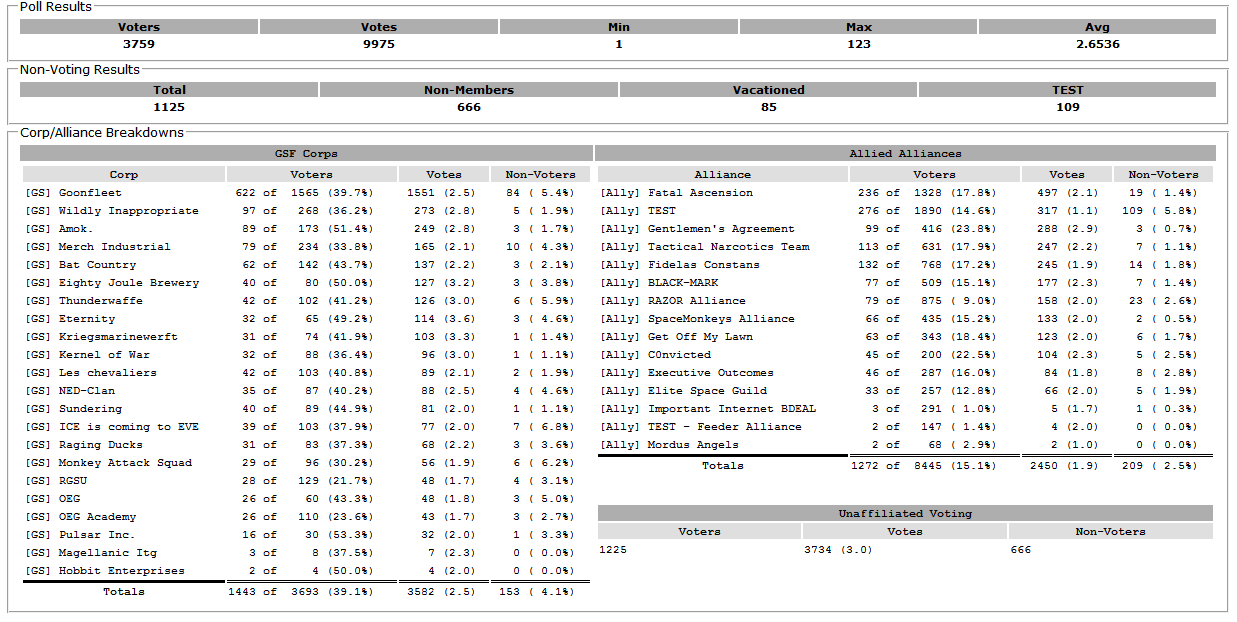 I had a reason to visit the Goonswarm website during the election.(1)  When I did, I was bounced to an interstitial that asked me how I had voted in the CSM election, and what corp and alliance I was part of.  Needless to say, I smiled and ignored it.  Still, it was kind of funny to run into the Goon "exit polling."  One of the most frustrating things about running for CSM is that you have no freaking idea how you're doing until the results appear.  You could be getting a few hundred votes, you could be getting a few thousand votes.  You just don't know.

This graphic comes from the EVE News 24 article predicting the results of the elections.(2)  So there's no way to know if this graphic was an accurate representation of the information coming off the Goon exit polling... or simply an attempt by the Goons to troll EN24.

Either way, though, we know that Goons have conducted exit polls of their members the last two elections.  It's a remarkably organized approach to the elections, and it wouldn't surprise me at all if some of the other power blocs started to emulate it just to take the uncertainty out of the process.  The interesting thing is how these exit polls could be used to game the system: Mittens probably knew all through the election how close he was to hitting his 10,000 vote goal.  For that reason, I think this image is legit.  I think it might have even been used to encourage Goon voters to get him there.  "3000 votes to go!", et cetera.

Anyway, congratulations again to all the members of CSM7!  You guys have your work cut out for you this year, I think.  Last year, I envied the CSM6 members their seats a little bit.  This year?  Not at all.  Not even a little bit.  From what I've seen of the Fanfest presentations, this is going to be a "be careful what you wish for" year for EVE players.  There are about three dozen minefields that the CSM is going to have to help navigate CCP through this year, and far more ways to do it wrong than ways to do it right.  Seriously, they've got their work cut out for them.

More on that over the next week or so.


(1) I wanted to see if Goonswarm Shrugged was still running during the election.  It wasn't.
(2) I beat riverini's predictions pretty handily, hee.
Posted by Jester at 12:02 AM