So, call this the picture of the week: 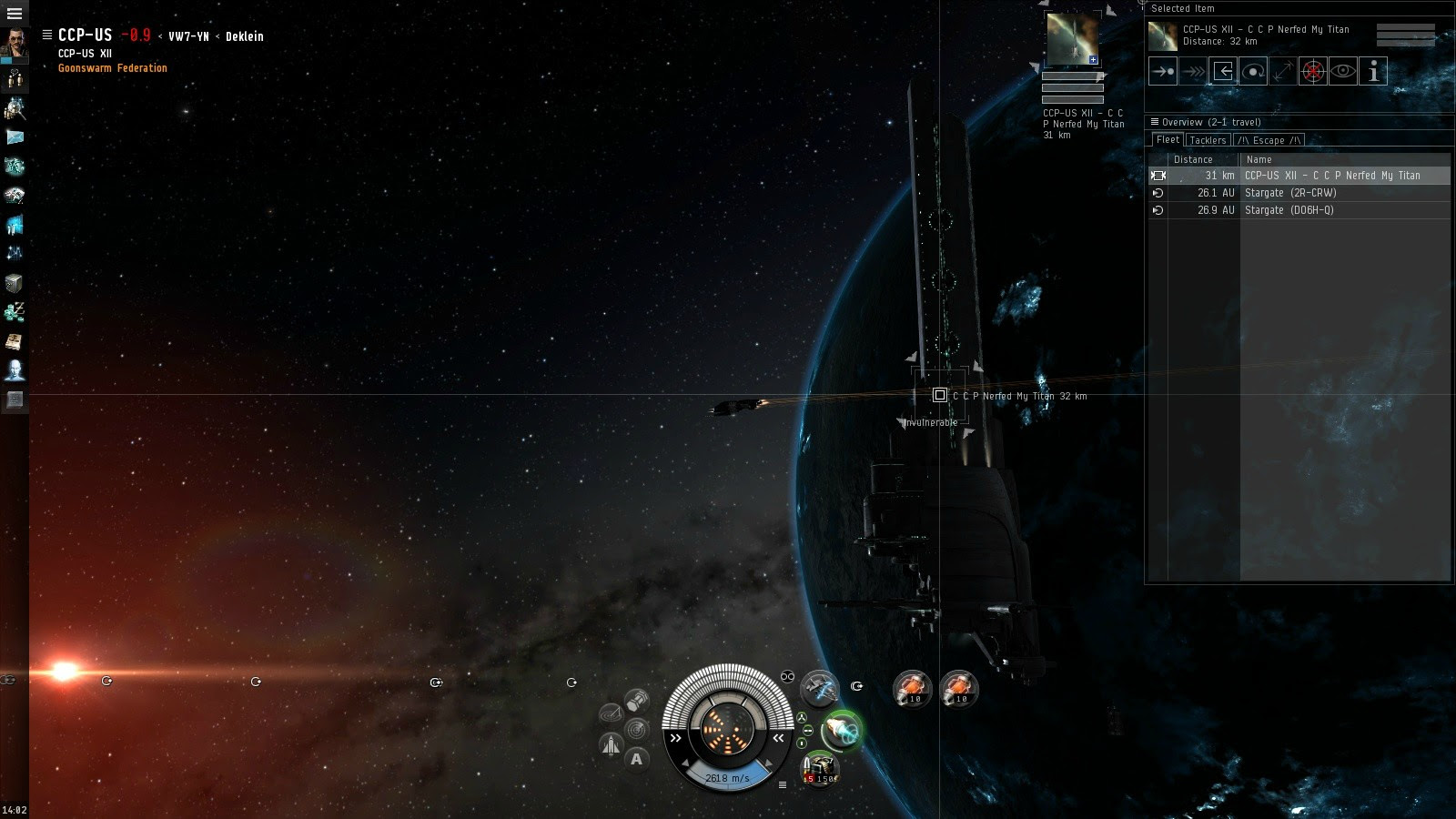 Why are the Goons so smug this morning?  Because right after DT, CCP Greyscale wrote a post in the Ships and Modules section of the EVE-O forums, which I reproduce here in full(1):

We're not happy with the effectiveness of large groups of titans against subcapital ships, so we're making some adjustments to titans and to XL turrets.

This is a quick, surgical adjustment to solve a specific issue we have identified. It's not a general titan balance pass, and we don't consider titans "done" after this change. Titans will require significant further changes, and probably an overall adjustment in role, before they're in a place where we're really happy with them. This will require a reasonably significant amount of work, which we unfortunately don't have the spare resources for right now. In a similar vein, we're not making more extensive balance changes (or addressing this issue in a more technically complex way) because we're allocating the minimum resources needed to resolve the specific issue (titans performing excessively well against subcaps in certain circumstances) satisfactorily. If you have any further questions about this paragraph, please ask away Smile

For the immediate future and until such time as we have the resources available to do a comprehensive overhaul, we want to ensure that titans perform decently against other capitals, but do not represent a serious threat to subcaps. We want titans to have clear vulnerabilities, and as much as possible to have them acting in support of the main capital/subcap fleet rather than the other way round. We've already prevented doomsdays from being fired at subcaps, and this adjustment should continue that trend.

We have talked to the CSM about this, and we're comfortable going forward with these changes in light of that discussion. I'm not going to put words in their mouths, though.


Specific changes being made:

This should generally make titan performance against small targets significantly worse, without seriously impacting their effectiveness against larger targets, or negatively impacting dreadnaughts in their common use-case (ie, in siege mode).

Titans reduced to 3 maximum locked targets, and base scan resolution reduced to 5

This should make trying to engage smaller targets very inefficient, due to long lock-times and an inability to queue many targets at once. This reinforces the titan's MO as a slow-acting but hard-hitting platform (in line with the doomsday's huge damage and 10 minute RoF). The scan res number is balanced around multiple Cormack's sensor boosters, on the assumption that money is not a limiting factor for titan pilots, and therefore that people will shell out for officer SBs if that lets them continue do this kind of thing. Our understanding is that this isn't standard practice right now, but we have to balance for expected behavior after the change, and for worst-case scenarios.

Expected release schedule for these changes

These changes should hit TQ some time in April. If there is a sizable release in April then expect them to turn up then; if not then we'll announce deployment dates for these changes closer to the time.

(I'm expecting at least three people to not read the word "discarded" and make angry posts about something in this section. C'est la vie.)

Titans can't lock subcaps at all

Guaranteed effective solution, but we considered it too hacky and restrictive.

Adding a "minimum sig radius" attribute to turrets, below which damage would fall off regardless of tracking

Too big a change and more technical work than we actually needed to solve the problem.

As it is, the lock time formula doesn't really scale in a nice way between battleships and capitals (the kink in the curve always happens around cruisers regardless of the scan res and sig radius), but again we decided we could solve the issue without resorting to this sort of technical work.

While in a strictly regimented world we ought in principle to nerf XL missiles and remove the penalties from the siege module for them too, in practice they're not actually a problem due to the way missile damage scales against small targets. Leaving them unchanged also serves to differentiate missiles further from turrets, which might make them more useful on capitals under certain circumstances.

Do I need to say how I feel about this change?  I guess I don't.  But I'm going to anyway: I'm 100% in favor of these changes from start to finish.  Further, I don't think the changes go far enough, and it's great that CCP recognizes this.  The ability of Titans in large groups to alpha particularly dangerous sub-caps off the field is merely reduced somewhat, not eliminated.  This still means that a large enough fleet of Titans, spread widely enough, will still be able to alpha sub-caps: at least one of them will still get the killing shot in.  And make no mistake about it: Titans still exist in fleet-size quantities.  We're still going to see examples of it being done.  But this change is a good start.

Let's talk a few specifics, too.  First specific: base Titan scan res right now is 45, so that's a nine-fold reduction in lock time.  Titans can currently lock eight targets; that's reduced to three.  My assumption here is that someone in CCP warped a Titan to a sanctum on Sisi and started blapping battleships while they calculated the amount of time needed to blap three battleships vis a vis locking more of them.  The net result, I suspect, is that Titans can kill rat battleships far faster than they can lock them now, setting a hard (and presumably low) upper limit on ISK/hour that can be made Titan ratting.  A ton of Titans in this game currently make back their own costs in a few months of Titan ratting.  That's one reason supers were becoming so ubiquitous in large sov-holding alliances.  I was hearing more and more stories about dual-boxing Titans!  It seems reasonably clear that the days of the ratting Titan will be ending not long after this change goes live.

On the one hand, this is a good thing.  On the other, though, this now represents a pretty clear dividing line in EVE's history.  "Don't fly what you can't afford to lose" is EVE law.  A lot of Titan pilots spend their spare time ratting in Titans so that they can follow that law: they want the ISK to replace their Titan should something happen to it.  There's now a flock of Titan pilots out there that can do that.  Given the low loss-rate on Titans, as a result, it's quite literally going to take years for this change to shake itself out.  A lot of Titans need to get blown up before the harm inflicted by ratting Titans is repaired.

Third thing: "money is not a limiting factor for titan pilots".  See above.  But just as interesting, expect the market for officer and faction Sebos to skyrocket now.  We've seen this happen with officer and faction Tracking Computers already.  Ironically, this might effectively represent a buff for Rags, given their seven mid slots.  I don't think people will be going out of their way to train for Rags to take advantage of this, though.  ;-)

Finally, what's most interesting to me of all is that CCP is apparently actually looking at the base code that drives this whole game.  We could see an inkling of that in the ship types dev-blog (which I'll be writing about this week).  When people first start playing this game, they tend to be a little bit dismissive of the tracking/sig radius calculations, thinking "Well, that's really complex, and I'll let tracking take care of itself.  I'll just get into range and hope I hit most of the time."  Later, you realize how critical these calculations can be.  The difference between an advanced PvPer in this game and a master PvPer is a fundamental, ingrained understanding of tracking, sig, and transversal (I'm not there yet).

So to hear a CCP dev talking about looking at and tweaking some of these calculations is interesting to say the least.  God knows that there are problems -- giant ones -- with the current math.  I won't scary math(tm) you in this post, but I'll give you one example and take my word for it: if you take tracking out of the equation, any firing platform at 0 speed will hit any defending platform that's in range 100% of the time.  Put another way, a stationary dreadnought has a 100% chance of hitting a pod either at 0 speed, or moving directly toward or directly away from the dreadnought, as long as the pod is in range.  Further, the math states that this dreadnought will do at least 50% of its base damage to that pod before sig radius is taken into effect.  That's 100% chance to hit, for at least 50% damage.  So yeah, there are definitely problems with the calculations.

As I said, hearing that CCP is considering looking at changing those calculations -- changing the bedrock principles upon which EVE rests -- is interesting to say the least!

Whew, this post went on a lot longer than I intended.  But yeah, overall, feeling very happy about this one.  CCP made the right move.

EDIT (13/Mar/2012): One final thought: I wonder how many Signal Amplifiers and Auto Targeters we're going to see fitted to Titans now in an attempt to side-step the limitation on number of targets?  A lot, I'm guessing.