Week in the Life: Red vs Blue

A week ago today, the EVE log-in ad was this:

Red vs. Blue is a pair of linked PvP alliances formed a few years back.  About a year ago now, they really sat down and formalized their structure and codified a short rule-set.  The structure was a pair of alliances: RvB - RED Federation and RvB - BLUE Republic, perpetually at war.  The short rule-set was "No podding allowed" and "No mid-slot jammers allowed."  And since then, the two alliances have been following an extremely "no shits were given" EVE play-style.  They undock in cheap ships (Rifters are favored) and fling those ships at each other en masse.

But there's three other funny things going on while they do it:

The result has been slow but steady growth thanks to a combination of newer players looking to try out cheap PvP and disgruntled EVE bitter-vets tired of the sovereignty slog and the need to fit their ships just so.  It's definitely not for everyone.  But if you're looking for the ultimate casual PvP corps in New Eden, these are they.

Anyway, as I said a week ago, the EVE log-in screen included an ad for RvB.  After it appeared, I myself joked on Twitter that "Jester's Trek scientists have determined that there is 2.5% more BLUE in the ad image than RED."  Mittens revealed that he'd joined RED Federation with an alt and was addicted.  "Riftering all day long and I can't stop," he said.  And damn if that log-in ad wasn't quite the little recruiting tool.  It does everything a good ad should: it's easy to understand, includes the benefits right out front, and is dynamic without being busy.  Whomever put it together did an excellent job! 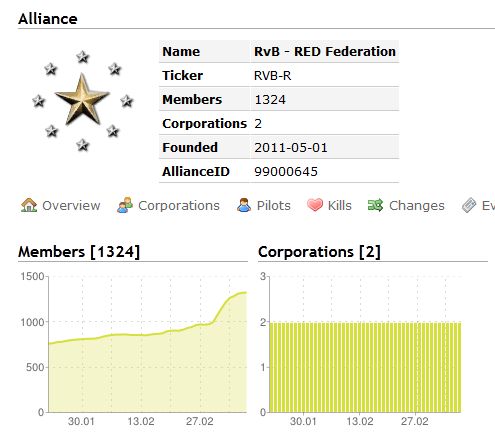 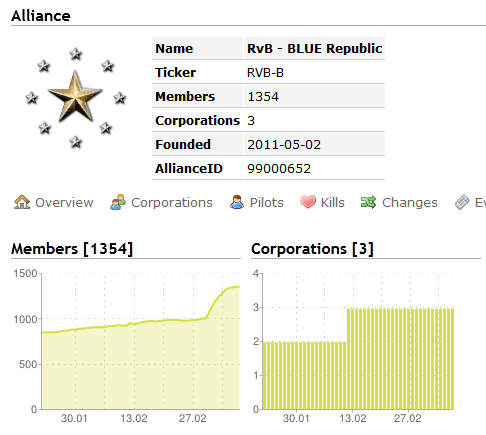 Both corps are up 30%.  Each.  In one week.  Yow!  Anyway, much fun is being had.  If you want to be a part of it, your journey starts at their recruiting thread on the EVE Online forums.  Keep up the good work, RvB!
Posted by Jester at 7:04 AM