The price is right

There's a business phrase that's applicable for me right now: "Don't get wrapped around the axle." 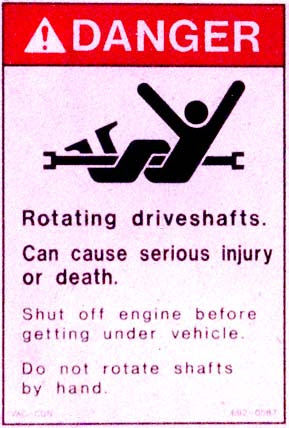 Invoking the image to the left and roughly defined, it means "don't get so wrapped up in the details of a problem that you get tangled up in those, and stop any forward momentum working the actual problem."  What's often needed when you're in danger of getting wrapped around the axle on a problem is a way to step outside the box and look at the problem from a new angle.  The problem right now?  A few months after April 24, when minerals stabilize at whatever their "new normal" is going to be, what are ships in EVE Online going to cost?

Trying to answer that question is turning out to be nearly impossible: there are too many variables right now.  The biggest variable of all is how common mining is going to be after the drone regions are stripped of drone alloys.  Right now, mining is not common.

The major problem with mining, of course, is that you have pilots stuck in helpless, defenseless mining barges and exhumers.  They can't tank, they can't fight, and if they're not pre-aligned when the attack comes, they can't run.  As a result, a mining op generally only lasts as long as there isn't a single neutral in Local.  The moment the single neutral appears, the mining op at least temporarily ends and the miners all warp back to POSes and wait for Local to clear out again.

"You pussies, defend your mining ops," some small-gang PvPers say, which is completely laughable.

Say you land on a heavily-defended mining op.  It contains a Rorqual, ten Hulks, but also thirty cruisers, BCs, and tacklers.  You have ten ships.  Are you going to attack the defense fleet?  Of course not!  You're going to point up those ten Hulks and kill as many of them as you can before you collectively die in a fire.  The math doesn't change if you have five ships, or thirty ships, or fifty ships: the Hulks die first.  They're helpless, tank-less, and expensive.  If you have thirty ships, you're definitely going to kill the Hulks first, then keep the Rorq pointed while you try to drive off the others.  And if you take a lot of losses while killing those ships that can't fight back, you'll accept those losses happily because each Hulk costs far more than your attacking ships.  You win the ISK war in spades.

This is unsustainable for the corp or alliance that intends to do any mining.  So of course they're not going to "defend their mining ops," and it would be stupid for them to even try to do so.  If they smell even a hint of danger to the mining op, the mining op is going to end.

Hint: this is why EVE Online needs a much tougher mining ship, something that can actually take some punches so that it lives long enough to call for help, receive reps, or Heaven forbid, actually be defensible.  None of the current mining ships even close to qualify.

So we can probably safely assume that -- at least initially -- mining may not be any more common than it is today.  Corps will try to start large-scale mining ops only to have those ops interrupted.  What corps, particularly null-sec corps, do to start up and protect mining ops is something that we're going to have to wait and see.  So we can't predict right now what's going to happen to mineral values.

So there's no point getting wrapped around the axle thinking about it just yet.  But still, the problem remains: how much are ships going to cost in this game in a few months?  Which is why it might be fun to think about this problem from another angle.  Let's go completely outside the box.

Instead of asking "How much are ships going to cost?" maybe the right question to ask is "How much should ships cost?"

In one way to gather the needed minerals, we'll need 600 units of arkonor, 1000 units of crokite, 10k units of hed, 8k hemor, 50k jaspet, 333k pyro, 400k scord, and 233k trit.  That will give us everything we need for a 50 million ISK Drake, plus about 37 million ISK in other minerals (almost all of it nocxium) left over.  It works out to 293k cubic meters of ore.  That's about 140 minutes of labor for a skilled but unbonused Hulk pilot, or about 102 minutes of labor if he's receiving full bonuses.  He'll make 87 million ISK in that time, or between 38 and 50 million ISK per hour if he could mine that uninterrupted, depending on whether he has bonuses or not.

But it also assumes one important factor: it assumes that the miner will be uninterrupted during that time.  That's definitely not the case today!  It definitely won't be the case tomorrow!  If a miner can only spend half his time mining (and the other half at POSs waiting for Local to clear out), then that's between 17 and 25 million ISK per hour from mining.

Which means he's likely to spend his time doing something else instead.

That means he's not going to mine until either the mining ops are better protected from interruptions or... until mineral prices (and therefore, ship prices) go higher than their current values.  Probably, a lot higher.  Large-scale mining might not start in earnest until mineral prices are double what they are today.  That makes mining ops worth the trouble even if they are constantly interrupted.  But it also means that ships will cost double what they do today.