Return to the source

In 2008, Batolemaeus on the old Scrapheap Challenge forum produced the following area chart based on some information in an EVE-O forum post made at that time. 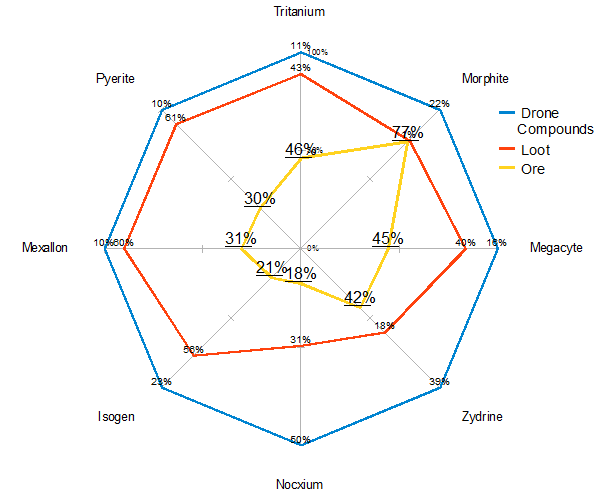 You read this chart by picking a mineral from the outside edge.  Then follow the black line in to the center to learn the sources of that mineral.  Take Isogen.  According to this chart, 23% of Isogen came from drone alloys, 56% came from reprocessing mods, and 21% came from mining.  The larger numbers surrounded by yellow represent the minerals gained from mining.  As you can see, they range from 18% (for Nocxium) to 77% (for Morphite, which you cannot reprocess from T1 modules).

This chart shows the source of minerals in EVE Online in 2008, not today!  Note that this is before the mission loot drop change and the drone alloys change in 2010, so these figures are not accurate now.  This is particularly true for Nocxium.  The fact that 60% of noc came from drone alloys at that time was a major reason that noc spiked so high when this change was made.  I blogged about it not long after starting this blog.  If you're interested in the history, you should read that.  The mission loot change also resulted in fewer reprocessable meta 0 mods, resulting in fewer minerals from that source.

Several people have asked "if no meta 0 mods drop, won't the increase in meta1-4 mods make up the difference?"  The answer is no, for two reasons:

It'd be very interesting to see a version of this chart for today, but we don't have that.  We can surmise very strongly that the yellow numbers have gone up, but we can only guess by how much.  What seems very clear is that today, less than 50% of minerals -- particularly low-end minerals -- come from mining.  In a few days, that's going to be the only significant source for minerals. 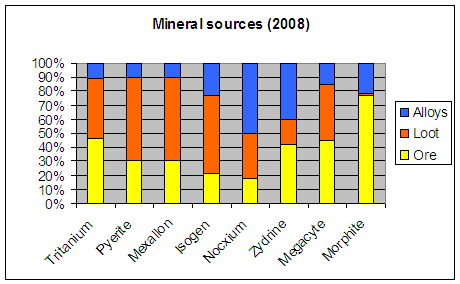