In a couple of weeks, CCP is going to do something so sweeping, so breath-taking, that I'm still having a hard time wrapping my head around it.  It's potentially the biggest change to the game since I started playing the game.  Yet it's proceeding very quietly.  I haven't thought through all of the implications yet -- not by half! -- but it's time to start talking about it.

At the Fanfest presentations, we got to see this chart a lot: 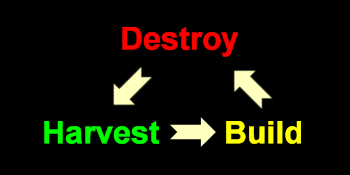 It's the typical three-legged stool of MMO economies, and of RTS economies, for that matter.  You harvest resources.  You use them to build stuff (or craft stuff, if you prefer).  You use that stuff to destroy people or things, either in PvP or PvE.  That creates a need for you or someone else to go back to harvesting, even if it's for something as simple as ammunition.  And the cycle repeats itself.  Theoretically, all of the elements have to be in balance for you to have a stable game.  And yet EVE's balance has always looked a hell of a lot more like this: 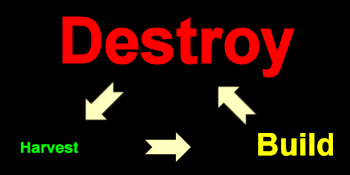 The build element is in balance, but the "destroy" part of EVE is definitely in the driver's seat.  Why is this?  Why doesn't EVE collapse in on itself despite the fact that there are damned few "harvesters" out there?

The hidden element of EVE's economy has always been the fact that there are three sources for the basic minerals that make up almost every item in New Eden.  Mining is one source, certainly.  The other two are drone alloys and reprocessing of mission and rat loot.  The latter two sources have always overwhelmed the miners.  And they come from destroying things.  Sure, an industrialist character has to reprocess the alloys or the mission loot sooner or later.  But that's a relatively minor thing; the source is the destruction of rats, not true harvesting.

And despite how imbalanced this has always looked, the EVE economy has functioned like this for years, and it's been very stable.

This means that drones will no longer produce minerals.  This means that the mineral source from missions and ratting will also dry up to nearly nothing.  That means that to build things, someone is gonna have to go out and mine asteroids all day long.

Needless to say, mineral speculation is completely out of control in the markets.  Most of the minerals have doubled in price, and the ones that haven't doubled have tripled.  Nocxium, my favorite whipping boy, has essentially doubled in value since I last talked about it in February.(1)  And it seems potentially poised to continue to rise in the next month or so.  And you can forget the old T1 ship prices.  You used to be able to buy an Armageddon for 50 million ISK.  That price has also doubled, as have most of the other T1 ship prices.  In the goofy way that cause follows effect in the EVE markets, this is suddenly threatening to make mining -- mining! -- the most valuable profession of all.

It's the high-end minerals that are spiking the most right now.  Crokite is back to being the third most valuable mineral, after falling to number six in February.  And it's very much within the realm of possibility that you'll be able to make 100 million ISK per hour mining Arkonor before the month is out.  It's passing 50 million per hour as I type this.  Look for a second round of bitching about w-space ABC mining from certain members of the CSM.  But hell, Pyroxeres mining is worth more than 20 million per hour right now, and I don't see any reason why it won't hit 35 before long.  The other high-sec ores will follow suit as the Tritanium and Pyerite from module reprocessing dries up.

Like pretty much any large-scale change to the game, it's the richest oldest players that are going to benefit the most.  But they're benefiting in a really odd way: they've got lots and lots of T1 hulls out there.  These are the players that buy their PvP ships by the dozen, after all.  I'm quite sure there are stacks of dozens of Hurricanes, Armageddons, Tempests, Ruptures, Drakes... the list goes on.  And of course there are corps and alliances sitting on millions of cubic meters of "worthless" meta 0 mods.  Suddenly, these items are quite literally money in the bank.  Watch for the economic engine of EVE to grind its gears backward in a month or so when the mineral values peak and all these reprocessed minerals are dumped into the marketplace.

But after that's gone... yeah... someone's gonna have to sit in a Hulk.

Again, I'm still thinking through the implications of all of this, but here's five big ones.

First, CCP Sreegs is going to suddenly find himself under intense pressure.  A lot of the mining that goes on out there is done via botting, and I don't get the impression that this has been all that high on his team's radar to date.  I suspect they've been a lot more focused on missioning and ratting bots.  This is going to have to change in a big damn hurry.  Mining bots are the easiest thing in the world to run and if players have to compete with them in this new gold rush, they're gonna be pissed.

Second, Hulkageddon is coming.  I can't even imagine the freak-out that's going to cause.  It's not outside the realm of possibility that production in New Eden could grind to a halt entirely from lack of materials, causing a second huge spike in T1 ship prices.  That might cause the economy of New Eden to stall entirely.  As ship prices spike, the already risk-averse EVE players are going to do everything they can to avoid loss.  Fights which were previously hard to find may become impossible to find as those ships stay docked up.  Without ships being destroyed, there may not be ships being bought.  That very lack of demand might just reinforce the stall and make it worse.

Third, if you're a US time zone miner, get ready to warm up your angry.  I think it's pretty likely you're going to log into the game to find the belts stripped clean before you can even start mining.  This is a huge buff to EUTZ players, a segment of the EVE population that didn't exactly need a buff.  They've already pretty much got the market cornered on static and dynamic complexes.  And they've already had the mining market cornered if they cared before... and they're definitely going to care now.  USTZ miners might be left with nothing but Omber and Gneiss.

Fourth, since mission rats will be dropping meta1 through meta4 items from now on, expect a huge crash in the price of some of the more expensive high-meta items.  If you're sitting on large stcks of them, now's probably an excellent time to sell them to anyone who's willing to buy.  I'm reminded of what happened to meta MicroWarpdrive prices after the drop rate for them was tweaked...  All those LOL-T1 roams are going to have to become LOL-meta1 roams.  Assuming you can afford the T1 ships themselves.

Fifth and finally, let's go back to those risk-averse PvPers again for a second.  Yeah.  Insurance values for ships are running at between half and two-thirds of ship selling prices right now.  We can expect that gap to increase as ship stocks get bought out and prices continue to rise.  These PvPers, by and large, make a lot of their income from ratting, missioning, and incursions.  All three income pools are being nerfed.(2)  This is going to create a situation where prices double while wages are reduced.  There's a technical name for this phenomenon...


And again, these are just the immediate implications that occur to me.  I'm sure as I think about it some more, more are going to occur to me.

CCP, I have faith in you, but I sure hope you know what you're doing!  This is a massive change to the game's underlying economy and things are going to be very scary for the next few months.


(1) There's a funny story about noc, too, that I'll get to later today.
(2) In addition to losing ISK from reprocessing mods, CCP Soundwave has also hinted very loudly that he wants to do an across-the-board reduction in the value of rat bounties, which are going to depress wages even more.
Posted by Jester at 12:08 AM