Week in the Life: Bottleneck

So, over the last few weeks, we've been seeing Technetium do this. 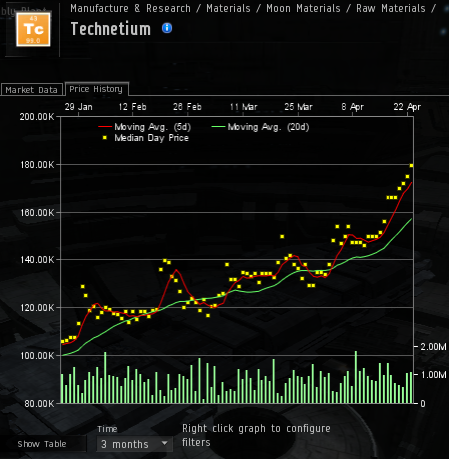 That's five days ago.  Today, the Tech buy price in Jita is over 200,000 per unit.  And "OTEC", the Organization of Technetium Exporting Corporations has apparently gone from "troll" to "reality".  OTEC apparently started as a troll by Mittens to see if he could drive the price of Technetium up in the market.  But then he actually started chatting with the alliances that control this stuff, and after that... Goons gotta Goon.  I've already written about that.

The question came into my head because Wilhelm Arcturus wrote a piece at The Ancient Gaming Noob focusing on this stuff, but in that piece, he said:


I recently saw an estimate that Technetium makes up something like 40% of the sale price of a Hulk.

And that struck me as a really low estimate.  So it set me to wondering, on a value basis, how much Technetium actually goes into a Hulk?  It quickly became one of those questions that, had I known the amount of work that it would take to answer the question, I never would have asked it.  ;-)  But below, you'll find the answer.

I apologize in advance: scary math ahead.  Matter of fact, if you're not into the industry side of EVE, you might want to skip the entire table that's coming up and just rejoin me at the very bottom.  I've only included the table so that the industrialists out there can check my figures.  Ready?  Here we go.

On a raw material value basis, Technetium makes up 70% of a Hulk.

And I suspect if I ran the numbers for most other Tech 2 ships and modules, the answer would be the same.  And it's only going to go up if "OTEC" decides to restrict the supply of Tech.  By the way, don't get the impression that it costs 170 million to build a Hulk.  It does not.  I haven't included the invention process, which is expensive.  One of these days, I need to write a blog post about that.  But yeah, in terms of the actual materials that go into a Hulk, Tech is 70%.

Kinda puts an interesting spin on the biggest Tech-holder in the game trying to blow up a lot of Hulks, doesn't it?

Still think Goons aren't looking to grief them some high-sec players?
Posted by Jester at 3:44 PM