Let's talk about a different sort of PvE, shall we?  A little bit of market PvE.  I call it PvE and not PvP because I wasn't fighting another player.  I was fighting a bot.  Here's the battle report.

We'll start with this:

At the time this screenshot was taken, I was attempting to buy Oxides.  Oxides are a PI product which is one of the things I don't produce enough of to run my PI factory planet.  It's a raw material.  Since I don't have enough of it, I place market orders in the smaller markets to pick up the amounts that I need.  Without these sorts of raw materials, I can't turn the raw materials into products that I want to sell.  Without that, no ISK for PvP ships for me.  So it's something that I have to worry about.

At the time this screenshot was taken, Oxides were costing me 5100 ISK to buy per unit.  You can see my buy order receiving sales at 0046 on April 8 and 0008 on April 11.  In the intermediate time, though, I notice that I'm always, always second-highest buy order.  It doesn't matter how early I get up and change the order, how long I babysit it, or how late I'm up.  Within a few minutes, the buy order I set to the highest price is behind a much larger order at 0.01 ISK higher.  That's a sure sign that you're dealing with a market bot.

Clients with red numbers represent people selling me Oxides.  Clients with green numbers represent me selling Oxides.  I've hidden the client names, but note the four red client boxes.  In each case, I buy one unit of Oxides from the lowest Sell order and then immediately sell it.  On two occasions in this screen-shot, the person I bought it from and the person I sold it to were the same person... the bot.  This is a mistake right here.  Most market bots are smart enough to at least use two different EVE clients for their buy and sell orders.  This guy, not so much.  First, I use the new reporting system to report him as a bot.

Then, I decide to have a little fun with him. 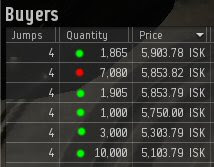 I call this technique "laddering", by the way.  A human would never fall for it, but bots always do.  I make the bot climb the ladder.  Meanwhile, I'm using some of my stockpile of Oxides to also drive the Sell price down.  I beat his Sell price by a couple hundred, wait for him to beat it, then create a second Sell order a couple of hundred below that, which he also beats.  Using the exact same technique, I can get the bot to reduce its Sell price closer and closer to its Buy price. 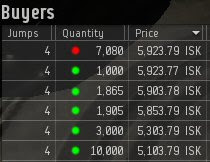 Here's a critical bit.  I now move my smallest Buy order, 1000 units at 5750 ISK per unit, a bit higher than the bot.  The bot beats it again, going to 5923.79.  A trick I like to use when laddering is that once I have the bot buying product for the price I want it to buy for, I'm going to "remove the lower rungs of the ladder".  But critically, I'll leave the "top rung" in place to keep the bot's Buy price high.  In this case, I've driven the bot's Buy price from 5100 to 5923 on a 7000 unit order.  I've cost the bot-running player an additional six million ISK.  That's a pittance, of course, but this is just a demonstration.

Meanwhile, as I said, using the same techniques I've pulled the bot's Sell order to 5999.88 ISK per unit.  The bot is now making a "profit" of 76 ISK per unit, down from the original profit of 1200 ISK per unit.  I toy for a while with trying to get the bot to buy Oxides from itself by closing this gap to 0.01 ISK, but the bot doesn't bite.  I close the gap to about 25 ISK successfully, though.

Here's the fun bit.  I cancel my Buy orders for 1865, 1905, 3000, and 10000 Oxides, leaving only the single buy order for 1000 Oxides right below the bot's order.  The "top rung of the ladder" is in place and keeping the bot from lowering his Buy price.  I don't need all those Oxides; the purpose to all of those lower rungs of the ladder was to keep the bot climbing upward.  At this point, it's time for me to go to work, so I don't get to see the thrilling conclusion.  But by the time I get home, I have 1000 Oxides in my Deliveries hangar and the Buy price of Oxides is back down to 5100 per unit, so I can safely assume the bot bought all the Oxides it "wanted."

Total cost to me of this little endeavor: 850,000 ISK.  That's 1000 units of Oxides at the difference between 5923 ISK per unit and the 5103 that I wanted to pay, plus a few market taxes.  But I've inflicted six million ISK of damage on my opponent.

Anyway, I'm making jokes about all of this, but the annoying fact of life is that bots are competing for the raw materials for industry and then immediately reselling them on the market instead of using them.  As a result, players who actually want to build things with those raw materials are getting cut out of the loop or have to accept markedly higher prices for the raw materials.  Or they have to set up market bots themselves in order to compete.  This is one of the reasons why the prices of everything are a little nuts right now.  Bots aren't only impacting mining and PvE, they're affecting everything that you buy on the market.

Sooner or later, the industrialists are gonna get fed up chasing shadows and give up.
Posted by Jester at 11:45 PM