Fair warning: this will probably the last post around here that talks about Global Agenda.  After putting out a well-received update to the game last fall, HiRez seems content to let the game go into maintenance mode from here on out.  I haven't heard about any further updates expected, though of course HiRez will be more than happy to take your money if you want to play it.  No, their energy and effort is pretty clearly going into the new Tribes: Ascend F2P MMO.

The fact that the Tribes forum has almost three times as many posts as the GA forum seems to both reinforce that decision and confirm the wisdom of it.  Tribes: Ascend utterly failed to hook me, though, so I myself will be looking for another casual play MMO.

In the meantime, I'd like to briefly chat about a very smart move on HiRez's part, and how I think that smart move may be adapted into EVE Online.  Let's start with the latter.

As EVE players know, the last of the major v3 graphical releases was completed this week.  As part of that update, the Minmatar and Minnie-based ships have now been updated.  After some mild complaints from players, the textures for the ships for the other three major races have also been lightened somewhat.  That said, they are still very dark.  As an example, here's what the Amarr Guardian used to look like: 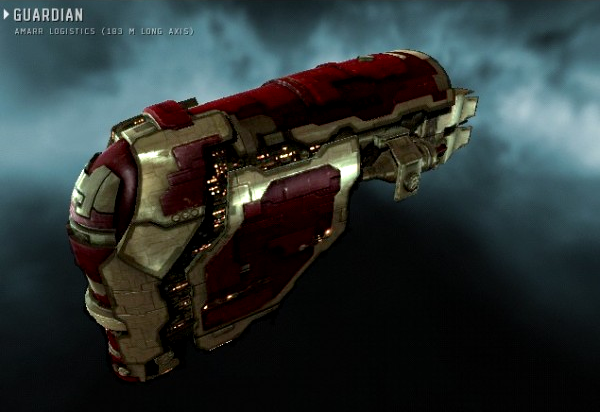 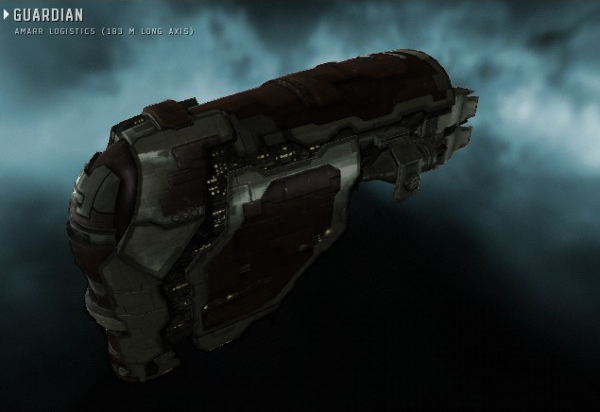 Yes, I'm being facetious.  ;-)  The new Guardian is actually somewhat darker than that.

Nearly without exception, the new textures are dark, dark, dark.  Even ships that have previously reveled in their colors such as the Apoc (known for the longest time as the "golden banana" and still referred to as being "golden" in its text description) have been toned far down.  The Apoc can now only barely boast of being bronze.  Gold is a thing of the past.

As I've mentioned here before, EVE is a dark universe, blah blah blah.  Get that.  But these changes seem to take things to too-literal extremes.  The new Broadsword texture, as an example, isn't dark.  It's black.  Virtually the entire ship is unrelieved black from stem to stern, with only a bit of grey to break up the monotony.  It's like a flying charcoal briquette.  One imagines the manufacturing process:


Minmatar One: OK, construction of Broadsword 1135 is complete.  What's next?
Minmatar Two: Now we spray on this brown ablative paste the eggheads came up with.  It's an advanced Nomex-Technetium composite that mitigates heat damage and under laser fire, ablates into crystalline clouds surrounding the ship to dissipate and deflect EM damage.
Minmatar One: As my grandfather used to say, "cool".  What after that?
Minmatar Two: Then we take the ship out and set it on fire for at least twenty minutes.  The manual recommends either an unshielded entry into an oxygen atmosphere planet or a close approach to a G5 type star.
Minmatar One: What?  That don't make no kinda sense.
Minmatar Two: Shut up and do it.
Minmatar One: I thought slavery was a thing of the past.

At which point, violence ensues.

Even more than simply darkening the textures, though, the ship texture colors are also being desaturated.  Any bright colors are being washed out and dimmed, with the result that what color is present is made less vibrant.

And that is what has been bringing Global Agenda to mind recently.  In GA, you play a pretty standard armored space marine.  You are initially given a default armor, which can be replaced with new types.  It also has "dye slots."  There are five tiers of dye available for those slots which can be used to dye three different parts of the armor or weapon textures: base color, details, "glow", and so forth.  The default (free) dyes are very unsaturated blues and greys.  The tier 1 dyes are available in many colors, but color saturation and gloss is greatly reduced.  A tier 1 black, for instance, is not really much more than medium grey.  Tier 2 is satin black, tier 3 is deep flat black, tier 4 is deep gloss black.  The other colors work the same way.  A tier 4 red dye is far more vibrant than a tier 1 red.

At tier 5, additional effects are added: tiger stripes, polka dots, background images, and so forth.  And tier 5 dyes are always, always eye-popping and highly individual.

And each dye tier, of course, is correspondingly more expensive in either in-game money or MT money.  Some tier 5 dyes are only available through micro-transactions.  The custom armors operate in a similar structure, with expensive custom armors showing off the high-tier dyes to their best effect and less expensive armors offering only simple surfaces.  So naturally, as you progress through the game, most players will choose to express their individuality with interesting color and armor choices.

But none of it has any in-game impact whatsoever.  You get absolutely no benefit from using highly vibrant custom dyes.  In fact, doing so is a disadvantage on some PvP maps because you become more visible.  A lot of GA players would keep two dye sets: their public out-of-battle or PvE dye set of highly vibrant tier 4 and 5 colors, and a much more muted camouflage PvP set based around drab tier 1 and 2 dyes.  But again, the game didn't care if you used the default armor in the default colors; your weapons, defenses, and abilities worked just the same.

It kind of makes me wonder if CCP is going the same direction for EVE.

We all know that customizable ship skins are coming sooner or later.  And it's a pretty damn good bet that when they do hit, Aurum will be a factor.  I don't think it's any coincidence that additional clothing was added in the latest Inferno release, nor do I think the price points for some of those items are a coincidence.  I'll have more to say about that later.  But with the v3 ship skins in place and the fact that guns now pick up ship colors, it doesn't seem like much of a step to add player-selectable skins available for purchase next.

And if those skins happen to offer more vibrant colors than what's currently available, will players have any basis for complaint?  After all, you won't have to use them and they won't confer in-game advantage.  And you did say that you didn't mind CCP adding micro-transactions for EVE as long as they were for cosmetic changes only...

But if you don't, you'll be flying a desaturated Guardian that has lost its cheerful bright red-and-gold color scheme, or a charcoal briquette Broadsword that you can barely see when you zoom in.  In short, I could be completely wrong.  But it sure seems like CCP is skewing the odds to their favor that once customizable skins are available, you'll want to use them.
Posted by Jester at 2:14 PM