Welcome to the junk drawer, part of a series of monthly posts in which I dump all the stuff that I couldn't develop into full blog posts this path month...

After being available in "archive mode" for quite a while, Mynxee's blog Life in Low Sec is now down.  I was asked not to make a big deal of this, but to remind any of you out there linking to LILS to go ahead and remove those links (as I have).

I would be remiss if I didn't mention that if you like my blog, you can thank Mynxee for telling me I should start one.  The rest is history, etc. etc.

I'm not sure I agree with the conclusions in this forum post:
http://www.lostineve.net/forums/viewtopic.php?f=2&t=93

They strike me as pretty alarmist.  But remember the conspiracy theory about how the war-dec allies system was "really" being nerfed to benefit large null-sec alliances at the expense of smaller high-sec corps who were supposed to be griefed by them?  Listen to the pod-cast this forum post points you toward and you get an unlikely source of evidence: CSM member Two step.

Does Two step really say the things that this forum post says he does?  In my opinion... no.  But it's an interesting listen nonetheless, and worth your time if you're following this topic.  The relevant section of the pod-cast starts 45 minutes in, so download the MP3.

Black Frog Logistics, who I've raved about before (usually when mentioning their parent corp Red Frog Freight), has come up with an interesting variation on their business.  They've started negotiating with sov holders for docking rights to stations deep in sov space.

This isn't a new idea, of course.  One of the richest people I know in EVE was doing this at least two or three years ago.  But he was doing it on a pretty small scale.  Even so, on that small scale he made tens (and possibly hundreds) of billions of ISK seeding deep null-sec markets with unusual items.  And he specialized in seeding items that were of particular relevance to the null-sec miner.

Now that null-sec mining is coming back in a big way, Black Frog seems to have had the same idea.

As I said, one player doing this made a fortune.  It's kind of interesting to me to wonder -- with the organization of Black, Blue, and Red Frog combining for this -- how many ISK will be made this time.  And of course, if for some reason your null-sec alliance is having trouble with large-scale logistics but yet you've still managed to (rent) take over a station, negotiating with Black Frog might be in your best interests...

Been hearing interesting rumors about CCP's efforts to deal with mining bots.  One of the more inventive ones I've heard about is alternating ship cargo bays between showing how much free space is available and how much space has been taken up.  This hurts mining bots because they have a harder time telling if the cargo bay is full or not.  Kinda clever.

I love this and this.  But I have no idea of the source.  Someone just sent me the links to the images themselves.  Can anyone clue me into the source?  I'd love to give full credit where it's due to some stellar work. 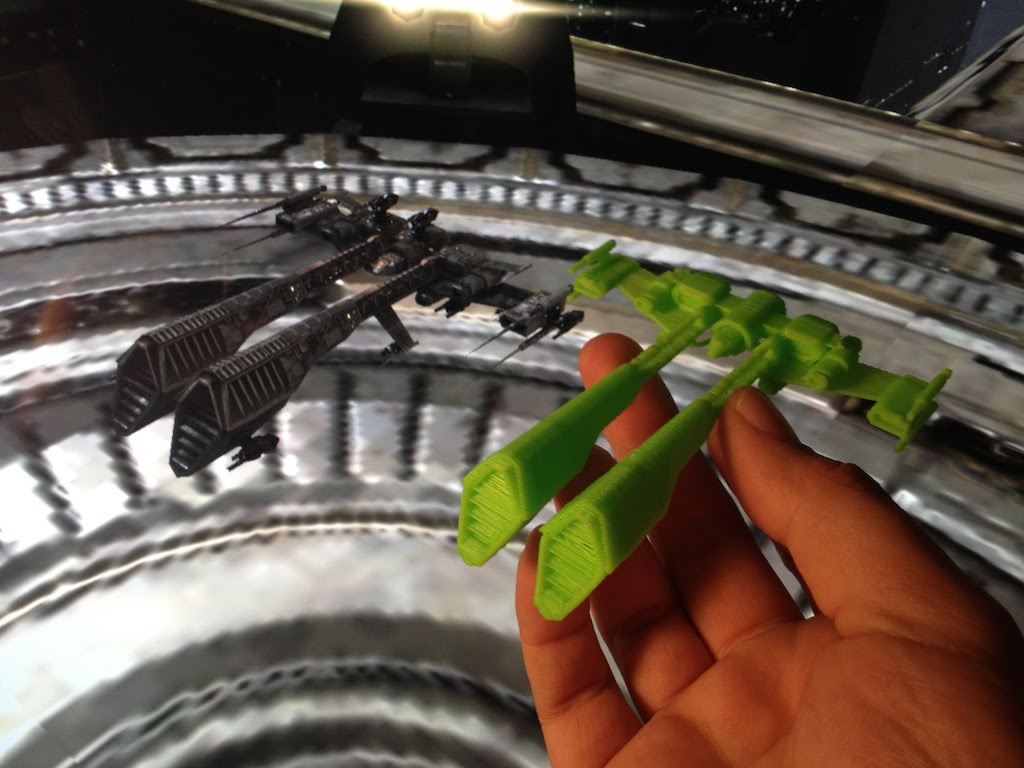 Probably just a personal quirk: I find that from about May 15 to about June 15, my enthusiasm for EVE drops.  It seems to happen every year too, or at least the last three years.  Maybe that's when I burn out on the game.  Or maybe that's when the nice weather convinces me to get outside the house and not play any games.  EVE of course has the famed summer slump.  Guess that's just how it impacts me.  Anyone else notice the same thing?

I'm a really big fan of the v3 art on the Minmatar T1 ships.  Whomever did the art for them should really feel proud of themselves.

In particular, two things about it really impress me.  First, the use of light colors along the outer flat edges, dark colors underneath, and mid-tones in between really give the Minnie ships an appearance of depth that they lacked before.  Nowhere is this more visible than on the Hel model, for instance.  The Minnie super-carrier feels a lot more hefty and present to me than it ever did before.  But the effect has been replicated nicely on the sub-caps as well, notably the Hurricane, Maelstrom, Tempest, and (surprisingly) the Vigil.

No, I still don't like the T2 graphical work.  It's either charcoal briquette or overdone space camo.  But the T1 art is really, really well done.

The second thing that I like just as much or more are the texture of the Minnie sails, such as on the Tempest.  Look through them, and you'll find that they are translucent and you can see solid objects through them.  However, pan around your ship so that you try to look at the local sun through sails and you'll find that you can't.  The sails soak up starlight but are otherwise translucent.  And the texture on them is just lovely.  Bravo to whomever did the work!

Know what I saw in EVEmon today?  Blueprints for Capital class rigs, that's what.  They cost about seven times as much as the corresponding Large rigs, in both their tech 2 variations.  Put another way, if these get implemented and you have T2 Large Trimark Armor Pumps on your Aeon already, your Aeon is going to appreciate approximately six billion ISK in value.

Prepare to witness a lot of really smug super-capital pilots when and if this gets implemented.  The impact on T1 rigs for carriers and dreads is no less significant, and is going to dramatically increase the cost of buying a capital ship.

As a side effect, watch as the gap between EVE's rich and EVE's poor grows even wider.  EVE is real.

And that's it.  Junk drawer is empty again.  Lots of stuff this month!
Posted by Jester at 10:20 PM