So, there's a new dev-blog out today, by a new EVE game designer, CCP Fozzie.  First, let me express my amusement that poor Fozzie got -- as his very first dev-blog! -- the third rail of EVE economics, technetium.  One imagines CCP Greyscale hiding inside an empty cardboard box on the loading dock somewhere when he heard that a dev-blog would have to be written about this topic.  Or maybe CCP Soundwave or CCP Unifex put all the devs in a line, asked the volunteer for this dev-blog to step forward, and Fozzie was the only person who didn't step back.  Twice.  ;-) 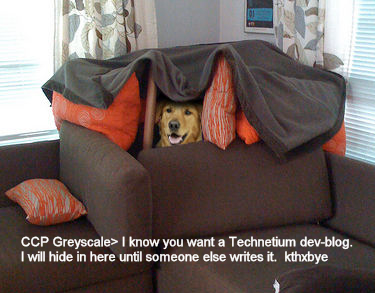 Anyway, I've of course written about "OTEC" before.  This troll-become-reality has entered the EVE lexicon with surprising speed.  I was also amused that OTEC has essentially been making fun of CCP right on EVE TV during the Alliance Tournament!  The "commercial" for "OTEC brand technetium" even uses my stat about what percentage of a Hulk is made from tech (70%).  gg OTEC; plus one internet from me.


So we -- and I include OTEC in that "we" -- have been waiting months for the other shoe to drop.  And now that it has dropped, it proves to be a ballet slipper: alchemy.  A strong response, this is not.  As a matter of fact, this is a remarkably weak response, so weak that I'm kind of surprised that CCP bothered.  When I read a statement like "So we are going to kick Technetium in the balls," I expect something much more sweeping.

Now before I go on, let me say that I fully recognize that this is a first step.  There's a whole paragraph devoted to the fact that there will be "multiple releases" devoted to this problem.  Eventually, the entire T2 production chain will have to be reworked, and eventually the gathering of the raw materials for this production will be done through "group game play and risk taking."  That's all to the good.  But I assume "multiple releases" means we'll see expanded alchemy in winter 2012, the first steps toward resource gathering next summer, and a new production chain in winter 2013.

Which means this dev-blog and the "pressure valve" that it describes is what we're stuck with for about the next :18 months:.(1)

For those not familiar with alchemy in EVE, there's a pretty decent guide to it that was published by Ten Ton Hammer a few years ago.  It covers the basics.  The short version: you need a low-sec, null-sec, or wormhole POS connecting silos containing the input products to an alchemy reactor that produces the "unrefined" product that you want.  You then haul the unrefined product to a station and use a blueprint to complete a manufacturing process, minus the appropriate taxes for use of station services.

Now CCP's idea here is that when the cost of this or that intermediate material -- such as platinum technite -- rises too high, people will set up these POSs and therefore put an upper limit on the costs of these materials.  In theory, there is nothing wrong with that idea.  In actual practice, there are two problems with it.

First, the profits from such an enterprise are obviously going to be extremely variable at best.  At worst, you'll lose money -- and a lot of it! -- attempting alchemy.  The risks involved for the casual player are pretty significant.  The average player does not set up a lot of low-sec POSs, for instance, because of the risk of losing them to a much bigger corp or alliance.  In the middle, you'll lose only a small amount of ISK as fluctuations in the market make this or that alchemy reaction less profitable.  This one is why the alchemy reactions that exist today aren't used that often, by the way: there are more consistent ways of making ISK with the same risk.  One of them is simply buying platinum and technetium and making platinum technite yourself using reactions.  If you have the means to buy the initial raw materials, the potential exists to make a large amount of ISK this way.

In short, only if things stay consistent on the market for a couple of months at a time are you going to make any ISK doing this, and only if you don't have any bad luck along the way.

Second, you're opening yourself up to tremendous market griefing opportunities.  Running a POS can be expensive and if you don't have all the raw materials you need for your reactions right when you need them, you could be stuck pouring fuel into a POS that isn't producing anything.  One of the two materials needed for the platinum technite alchemy is cobalt, what was until yesterday an extremely cheap material.  Needless to say, the price for every scrap of cobalt in the game has now inflated hugely, going from an average price of 600 ISK per unit to 6500 ISK per unit or so.(2)

Think the richest organizations in the game are going to casually let you cut in on their livelihoods?  Or do you think they'll simply have you paying for your tech in a new way?  Let's go to the forums:


We'll be backstroking through our 9 trillion isk that we've made off our moons while you all try to figure out whats the next best thing to do (that we'll already be well on our way to controlling).

Well.  That answers that question, then.  ;-)  Seriously, to buy every scrap of cobalt currently on the market in Jita would cost about 40 billion ISK... about the cost of one well-fit super-carrier.  On the scale of the ISK being made on tech, this is a rounding error.  The CFC can grief every alchemist in the game comfortably every few weeks or so, completely disrupting the alchemy supply.  That will leave anyone who tries to get into this market with either no raw materials to put into their alchemy or hugely expensive raw materials.

Perhaps you have an idea to stake a claim on your own cobalt moon.  That's fair.  It's only a Rarity 8 material, so moons should be pretty common.  And sure, there's cobalt moons scattered hither and yon around the galaxy.  But guess where the highest concentration of known cobalt moons is.  Go ahead.  Guess.  No, guess again.  Yeah, now you got it.  The southwest corner of the galaxy.  Places like Aridia, Khanid, Provi, Catch, Querious, and Period Basis are lousy with known cobalt moons.  Delve probably has lots of them too, but there's never been an attempt to publicly document what's available in Delve.  But I know the Goons maintain a monthly budget for moon scanning.

Oh, and the other platinum technite alchemy material, platinum?  Someone bought about 20 million units of that today and then relisted it on the market for twice the price it was yesterday.  Hope those of you doing platinum technite reactions today have a reserve stocked up.

In the "Bottleneck" post I wrote a couple of months ago, I listed the exact materials needed to build one Hulk in terms of raw materials.  That's where that 70% number that OTEC used in their commercial came from.  But I didn't explicitly list the materials for the complex reactions.  In point of fact, it takes 1174 units of platinum technite to make one Hulk.  Moon goo from tech moons go into reactions.  The current platinum technite reaction is a simple reaction generating 200 units per one hour cycle.  Therefore, 1174 units is six hours from one platinum technite reactor, meaning that one such reactor can produce the materials for four Hulks per day.

Because otherwise, OTEC is shaking in their boots, I'm sure.

As I said, this first response from CCP to the tech problem is pretty freakin' weak and I hope we'll see something stronger before the winter expansion.


(1) See what I did there?  I'll have more to say about this eventually.
(2) "If you dump all your isk into speculation around this blog and lose it all because we changed something again, you have only yourself to blame," says the dev-blog about this.  One hopes they'll change the magic mineral to chromium or something before release.
Posted by Jester at 12:13 AM