The middle way is none at all

It was nearly impossible for me to listen to the CSM7 Town Hall without thinking about CSM6... and CSM5, for that matter.  And contrasting what we have today with what we had last year, and the year before. 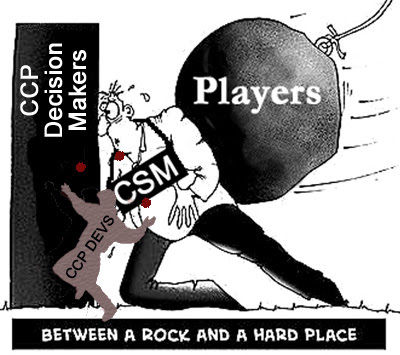 From an external observer's perspective, being on the CSM has always been a tricky balancing act best exemplified by the old graphic to the left.  I've only been a particularly diligent CSM watcher since CSM5.  Before that, I was vaguely aware there was a CSM but it didn't strike me as particularly important.  It really reminded me of nothing so much as a student council.  I guess I wasn't unique in that view.  ;-)


CSM5 changed that in a lot of ways but probably one of the big ones was that they started to become part of that "players rock" instead of getting crushed by it.  This fostered a relationship with CCP that turned out to be a little more adversarial than CCP probably expected.  It's certainly not every CSM that's been referred to as "terrorists" as CSM5 infamously was when they posted their Open Letter regarding Incarna.  I said at the time that I thought the Open Letter was a mistake, even if a lot of what was in it has over time proved true.

That was probably the first time that I ticked off some CSM members.  It certainly won't be the last.  ;-)

So, even if you believe that CCP went a ways toward freezing out that CSM, you could argue that CSM5 leaned a little too aggressive in their dealings with CCP.  The danger there is that if you're being frozen out of the process and you complain about it, you create a vicious circle where you're even more frozen out.  Take it far enough and the players ignore you except as a source of entertaining drama.  You certainly can't influence game development!

Not long after that, CSM6 came on board.  At the time, I wrote a little open letter of my own directed to the CSM's new Chair, advising him as one of his first tasks to work on that relationship.  And he didn't need my advice in that regard; it was clearly part of his plan from the beginning to leverage the relationships he'd already built in the company.  Still, to a certain extent it meant that he'd be throwing off the sense that the CSM was on the player's side.  The Mittani had to pivot to CCP's side in order to be effective.  As a result, CSM6 was accused -- quite often! -- of being little more than a CCP mouthpiece and not really caring what the players wanted or thought.

By taking the side of the devs and decision makers, the danger there is that the player base regards the CSM as a worthless publicity stunt.  The player-elected body has a chance of being lumped in with the rest of CCP's Public Relations machinery... part of the wall that the players are banging against.  Take it far enough, and the players start to ignore you as a walking, talking CCP press release.

I didn't believe that about CSM6, but it's arguable that CSM7 has crossed the line.

After I listened to the Town Hall, I headed over to Failheap Challenge.  I hadn't visited their CSM section in a while and I was curious what the people there thought of it.  Answer: they don't think anything about it.  The last post in that section is a month old.  There's nothing about it in the EVE General section, either.  Their thread on the CSM Summit Minutes is 20+ pages of bitching about off-grid boosters and has very little to do with the Minutes.  And in retrospect, I guess that shouldn't have surprised me.  Taken as a collective group, FHC is firmly in the "CSM is a CCP mouthpiece" camp, and I suspect CCP Xhagen and CCP Manifest showing up with the CSM on EVE Radio just reinforced that impression.  CSM members have stopped posting there, except very occasional sly comments.

The opinion of the Kugutsumen community of the CSM is, by and large, not that much better.  Two step routinely gets ripped up pretty hard there and Endie's opinion of Seleene is something you have to read yourself to appreciate.(1)  Needless to say, there are no posts about the Town hall there, either.  CSM members have stopped posting there too, except for Elise who had an obvious relationship with Kugu before he was on the CSM, and Two step, who apparently has masochistic tendencies that we weren't aware of.  ;-)

"The favored topic of CSM7 appears to be CSM7," says Wilhelm Arcturus, The Ancient Gaming Noob.  He's joking about the opening 41 pages of the Minutes, which are -- yeah -- about the CSM process in general.  But then he goes on:


They are trying to be witty or amusing.   They have personal agendas or axes to grind.  They seem to obsess about petty hair splitting.  But most of all, they seem to be very much focused on themselves for 30 freaking pages to no useful purpose.

Ouch!  But absent other official, easy to find communications, stuff like the Minutes or the Town Hall is all we've got.(2)  And that's what people are going to respond to.

CSM7 seems to be cheerfully willing to use their own player experiences to guide what they tell CCP.  And sure, that's their right the minute the voting is over.  But without a crowd-sourcing initiative or some other active means of drawing in player input, what motivation are players going to have to pay attention to CSM7 or ask them for help?

"In politics the middle way is none at all," said American President John Adams more than 200 years ago.  And the CSM often refers to themselves as Internet spaceship politicians.  But I believe to be taken seriously on the CSM, you must strike the middle path.  Otherwise, you are likely to be ignored by one side or the other.

What say you, Dear Readers?  Are you paying attention to this CSM?  Or did I just spend a day's posting on a topic you don't care about?  ;-)  If that's the case, come back tomorrow.  I have something really fun to write about.

EDIT (22/Aug/2012): The graphic at the top of the post was created by CSM5 Chair Mynxee.  She's included her comments in the comments section.  Thanks, Mynxee!  <3


(1) Come to think of it, it will be very interesting to see what, if any, coverage CSM7 gets on themittani.com.  I just checked and so far there are only three articles there so far that even mention the CSM.  None of them have anything to do with the CSM as an organization.  None of them are written from a news perspective.
(2) Seleene mentioned during the Town Hall that one of his goals for the second half of CSM7's term was to blog more himself and encourage other CSM7 bloggers to do the same.
Posted by Jester at 5:35 PM