I'd like to talk about that forum post that has so many high-sec industrialists up in arms, but to do so properly I'm going to have to give a bit of an accounting class.  So you might want to strap in.  I assure you I'll be getting to a point immediately afterward.  In the post, CCP Ytterbium is asked about the fact that "high-security stations are too good" and is asked if CCP plans to change that.  His answer:


Indeed we do. This topic brought quite an internal discussion, and while this most likely won't be part of a Factional Warfare iteration, we do want to have a look at reducing high-security stations effectiveness to make other areas of space more interesting. Some examples could be reducing refining rates, increasing ISK payment to install jobs. Nothing is set in stone as this is not planned for the immediate future however.

First off, let's make sure to read that last phrase.  ;-)  None of this is planned for the immediate future which means we're not going to see any of this in 2012.  But let's talk about the rest.

In a traditional manufacturing business, a pretty basic concept is the cost of goods sold, or "COGS".  Like many business metrics, it's usually a snapshot taken at a particular moment in time.  But to explain it, I'll simplify.  Say you're an EVE industrialist and you're building and selling Hurricanes.  You sell a stack of ten Hurricanes for 45 million ISK each, for a total sale of 450 million ISK.  Your cost of goods sold for that stack are all of the expenses that you incurred to make that sale.

In EVE, this comes down a series of ISK and material outlays:
There's also the possibility for other incidental costs depending on how professionally you want to keep your books.  For instance, you might choose to depreciate the time or ISK you paid to buy your BPO/BPC or research your BPO.  But let's keep it simple and stick with the four factors above.  The sum total of those factors are the cost of goods sold for your Hurricane stack.

Once your character has Production Efficiency V, those four factors are really the only variables involved in the COGS for those Hurricanes.  However, far and away the biggest one is the cost of minerals.  If your blueprint is researched to a reasonable level, it's going to cost you around 42.5 million ISK in materials to manufacture your Hurricane.

But let's zoom in on those "(if any)" lines that I included, because they are important.  Once two manufacturers have about the same skill and the same level BPO, how much of a difference do they make?  It turns out: not much.  As your Trade skills increase, you'll drive your taxes to around 340,000 ISK.  If you pay to manufacture your Hurricane in high-sec, chances are that will cost you about 2000 ISK.

Next to 45 million ISK, these are not big numbers.

Mabrick, who is usually really good about care-bear concerns, kinda drops the ball when he talks about this one.  One of his suggestions is rather than nerfing high-sec stations that low-sec manufacturing should be buffed instead.  Make it cheap cheap cheap, he says.  But it can hardly be any cheaper than it is right now.  So let's say CCP Ytterbium is right and the cost to manufacture goods in high-sec should be increased.  NoizyGamer is considering moving to low-sec over it!  But let's put it in perspective.

In real-world manufacturing, the cost in labor to manufacture goods is a significant percentage of the cost of those goods.  To use the most blatant example, the clothes you wear are made in China because material is cheap but factory labor is expensive.  For example, a typical $80 dress shirt costs $22 to make (trust me on this one).  Of that, about $8 is labor and $14 is the materials.  If I make that shirt in the U.S. instead, that part of the COGS for the shirt increases by almost 50%. 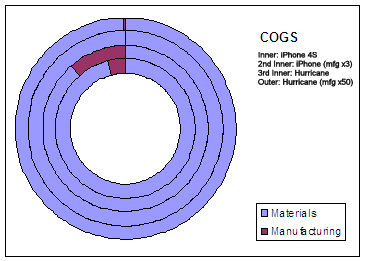 Third innermost track is a Hurricane.  The manufacturing cost of a Hurricane, expressed as a percentage, is so small that you can't even see the thin line representing those costs.  In the outermost track, I've increased the cost to manufacture a Hurricane by 50 times... and you still almost can't see it.  Clearly, making high-sec manufacturing more expensive is not going to have any impact whatsoever on market prices in EVE.  It sure won't encourage people not to do their manufacturing there.  If they notice it at all, industrialists will just pass the very tiny cost increase to the buyers and that will be that.

Increasing taxes to sell things in high-sec would theoretically have a bigger impact, right?  Typically, someone with good Trade skills pays about 0.75% in station taxes to sell large stacks of items.  As I said above, for our 45 million ISK Hurricane, that's about 340,000 ISK.  Again, for this small number to have a significant impact on the cost of a mid-level item like a Hurricane, CCP would have to greatly increase that percentage.

But even if CCP did it, to save those taxes, that would assume that people would want to go to low-sec to do their buying and selling.  That ain't gonna happen to significant degree so the impact would be minimal.  Again, any noticeable tax increases -- whatever the cause -- would just be passed on to the buyer of the item.

So getting excited about that part of CCP Ytterbium's post is not warranted, to say the least.  ;-)

However, there's another possibility that's been discussed on and off for at least two years that I've been putting off talking about for quite a while.  I'll take my first swing at it tomorrow.
Posted by Jester at 3:03 PM