Snapcount is still off doing its thing and this strikes me as a good time to provide an update of what's been happening since May and March. 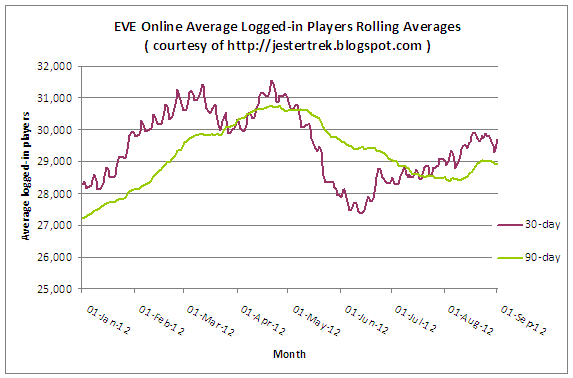 Short answer?  Not a lot.  After peaking at an average logged-in user count around 31000 just before summer began, there's been a long very slow decay.  What I believe is the explanation for the pronounced dip in late May and early June is below.  But we're now at 90-day rolling average of about 29000 logged-in players and that's where things seem to be trapped.  Things are so flat on this metric that it got me curious how long that's been the case now.  The answer turns out to be 40 months, since right around 1 May 2009: 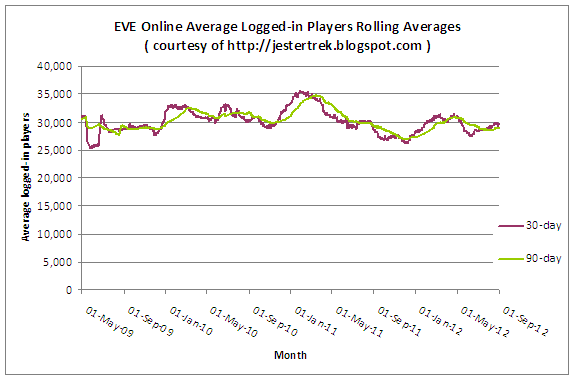 The mountain in early 2011 is the release of the Incursion expansion.  That still currently holds the holds the record for the highest sustained logged-in user counts particularly during the incursion live events that were frequent at that time.  The deep valley later in the same year is the summer of rage, ending with the announcement of "all spaceships, all the time" that happened that autumn.  But overall, the curve remains remarkably flat.  CCP is not having any luck breaking out of this deadlock at present.

I didn't show the 7-day rolling averages on these charts because if one thing has changed, it's that the data is much more volatile this year.  There's been a lot of competition in the MMO space in the last 12 months, and I attribute the volatility to that.  Every time a new competitor is released you can see massive dips in EVE's logged-in players, particularly on the weekends.  Very prominent on the upper chart starting in late May is what I've started thinking of as the "MechWarrior depression."  There was a less-pronounced "Star Wars depression" and the September Snapcount data so far shows there's going to be a fairly pronounced "Guild Wars 2" depression as well.

Still, EVE seems to survive each depression and bounce back to its previous average.  So the game doesn't seem to be losing we hard-core players to other MMOs.  As I said, we're just not having much luck adding many new players to that core.

So as I said, not a lot to talk about.

The question does come up, though: how much longer is Snapcount data going to valid and measurable?  This has come up in my thinking because the data is about to get goosed pretty hard.  Look at the Singularity logged-in user data and you'll see that the average logged-in users over there has been running between 100 and 200 for a couple of years now.  This was the case right up until mid-August this year, when DUST 514 testing was moved to Singularity.

Now that that's taken place, daily logged in averages on Sisi are running at about 1200 with peaks to anywhere from 1700 to 2500 logged-in users.  Last weekend, the peak logged-in users on Sisi pushed more than 3000.

So... yeah.  We can expect this means that the same thing will happen with the Tranquility API once DUST 514 goes live presumably later this year.  So, unless the API is tweaked to differentiate between EVE players and DUST 514 players -- and I don't see any reason why CCP would want to -- there will probably be one more Snapcount update based purely on EVE players this year.  After that, there will be a new normal and any changes will probably be influenced much more by DUST 514 player count changes than EVE player count changes.

I'll have to decide what to do with this little project when we get to that point, but I'll probably keep it running.  Why not?  It'll be a very nice measure of how successful DUST is in the marketplace.
Posted by Jester at 1:00 PM