Possession is 9/10ths of your soul

I'm pretty sure I first encountered the expression "soulbound" in RIFT.  I had no idea what it meant.  The game sure wasn't interested in telling me what it meant, either.  Instead it just warned me that if I picked that item up, it would be soulbound.  It sounded slightly scary to me at the time, if I recall correctly.  ;-)  Later, I started encountering "bound" items in Global Agenda and in due course I discovered what the expression means. 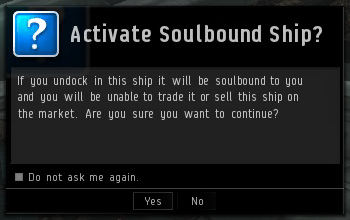 I don't praise EVE enough -- mostly I assume you guys are smart enough to figure out that if I'm not blasting something, I must like it at least a little -- but this is some of the true genius in EVE's game design.  There's not really any such thing as possession in EVE.  If any of us saw the dialog box to the left, we'd laugh.  It makes me smile just looking at it because this concept is so foreign to the EVE universe.

There's three things going on here.  First, it takes a really smart game to let you do really stupid things.  Want to fit meta 1 guns to a Vindicator?  Go for it.  Officer rocket launchers on your Kestrel?  By all means.  Get into a cap fight in a Chimera with Carrier II skill?  You bet.  Hull tank a Tengu?  Fine by me.  Select all the mods in your hangar and click "Fit to Active Ship"?  You can do that.  Fit the Powergrid Subroutine Maximizer rig to a ship for any reason whatsoever?  Absolutely.

Something I'm running into in GW2 that I find amusing is that it's trying to have a vibrant economy with a player-driven marketplace, but as long as the game insists on having soulbound items and leveled items, it's never going to get there.  Oh sure, there's stuff for sale there, even useful stuff.  It's mostly good for filling in your gear pieces with sorta-OK items because the game insists on randomly giving you fourteen items of one type and zero of the one you need.  But the good stuff is invariably level-limited, soulbound or both, which means at the end of the day you're probably not going to find something on the market that's better than the random drops.

Only if a character picks up a good item and resolves not to use it and puts it on the market immediately will you get a crack at it... and even then you'll only be able to use it if your level stacks up.

This is another genius of EVE, copied straight from the real world: we're all using the same gear.  It's just that some characters are better at it than others.  GW2 really really really should have gone with this sort of model.  Let us all use the same great swords and axes and rifles, with some models having advantages in one direction and some having advantages in the other.  And then set the damage and the scale of those advantages to character level.  A master swordsman can take the very same wooden practice sword a novice uses... but is much more effective with it.

And conversely, if the novice picks up a pair of nunchakus or a scimitar while untrained (insufficient level), dumb (and fun) things happen.  Level 1 novice picks up a level 1 sword, fine.  1-10 points of damage plus other bonuses.  Level 1 novice picks up a level 40 scimitar, not so good.  1-3 points of damage.  Make it clear (with bright red text or something) that the novice is being badly penalized for reaching beyond their training.  But if they insist on flying a hull-tanked Tengu or a Vindicator with meta 1 guns, let them.  And if they want to spend every piece of silver they have to buy it, let them do that too.

It's one of those few places where GW2 made a dumb design choice.  EVE made the smart one.

The second and related place is this whole "soulbound" business, though.  There really should be no room in a game with an open marketplace for soulbound items.  Let players buy and sell what they want.  If you want to make a few (and I do mean a few) items lock to characters because they were won in particularly nasty PvE challenges, PvP tournaments, or whatever, fine.  But as this percentage of items gets over a few percent of your total items, you're just limiting your in-game marketplace and limiting by two or three the number of careers that players can have in your game.  Let there be a guy out there buying and selling vast quantities of high-end items and making a profit.  Let him stand in front of the Trading Post agent all day and all night if he wants to.  If he's creating content for your players, why not?

I can't tell you how pleased I was when I realized that most NPC merchants in GW2 sell run-of-the-mill crap and you have to go to the Trading Post to get the good stuff from other players.  And I can't tell you how disappointed I was when I realized that only a small fraction of items in the game are actually available there, and only a small fraction of those are actually useful things a player might buy.  This is a place where the game can definitely stand to grow and develop in the future if the developers choose it.

Third item?  Upgrades.  Another very smart bit of game design in EVE is that ships are infinitely customizable, all of the customization can be removed, and only a small fraction of that customization is destroyed when doing so.  When you realize hull-tanking your Tengu or fitting meta 1 guns to your Vindicator is a daft idea, you can strip the ship to bare metal and try again.

GW2 has upgrades too, but once you fit them, as far as I can tell all but the richest characters are locked into them.  This is also as dumb as a box of rocks.  I can't even express how dumb this is.  Granted, we're dealing with "magic" here, but removing a gemstone from the hilt of a sword is a trivial exercise.  Military officers in the late Renaissance and early modern age would be asked to surrender their swords as a token of the surrender of their command.  But more often than not, the victor had a somewhat baser purpose in mind: it was a simple matter to pry the gold filigree, gems, and seed pearls off a vanquished gentleman's sword if you had it in hand...

In a similar way, if you find an upgrade superior to the one fitted to a particular piece of equipment, you should be able to pop off the old upgrade and put in the new.  This has the bonus of giving novice crafters in the game a ready-made stock of low-level upgrade items to work their craft with as they reach the mid-level ones.  Again, there might be a simple way to remove these upgrades that I'm just missing and it's a relatively minor issue compared to the other two.

Sometimes you play a game and you don't appreciate the good, correct choices the game developer made early in the process until you're presented with the alternative choices they could have made.  Let's all sit down and offer a brief note of thanks that our EVE strategic cruisers aren't soulbound, shall we?
Posted by Jester at 3:34 PM